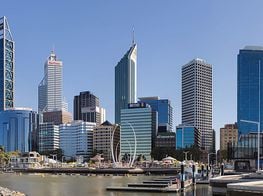 Protestors stencilled over the Aussie masterpiece with the logo of fossil fuel company Woodside Energy.

An iconic Australian painting of a melancholy swagman was painted over on Thursday to protest the destruction of Aboriginal rock paintings.

Joana Partyka sprayed a yellow Woodside Energy logo on the perspex covering Frederick McCubbin's Down on his luck (1889). Desmond Blurton then laid an Aboriginal flag on the floor in front of the painting.

The artwork, which is valued at AU $3 million, was reportedly unharmed.

Partyka and Blurton said they had painted over the McCubbin to draw attention to Woodside activities that are 'destroying ancient Murujuga rock art' on the Burrup peninsula, north of Perth.

'This painting is barely 100 years old,' Blurton said during the protest. 'We have 50,000-year-old artwork that Woodside is destroying.'

Partyka said Woodside's Burrup Hub gas project would emit 6 billion tonnes of CO2 by 2070, and that climate change caused by fossil fuels was contributing to catastrophic flooding in Australia.

'Woodside is happy to slap its logo on everything, including some of our most significant cultural institutions ... while they spray their toxic emissions over sacred rock art,' Paryka said.

'Woodside has a proven, more than 35-year track record of safe, reliable and sustainable operations on Murujuga, delivering natural gas to customers in Western Australia and around the world,' Woodside told the Guardian in response to the protest.

They said peer-reviewed research 'had not identified any impacts' on Murujuga rock art from their activities in the region. —[O]

Seoul arrived, despots were denounced, antisemitism resurged, NFTs imploded, and the climate continued to change. None of these were our top story in 2022.

Iti joined nine other creators honoured in this year's awards. He's the only one to have been convicted of firearms charges.