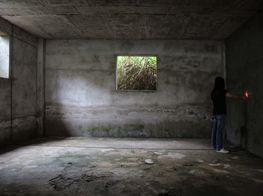 Beijing-based artist Li Binyuan was announced the winner of the Sovereign Asian Art Prize today. The prize is worth US $30,000.

His winning work, Tilted Portrait (2020), is a black and white self-portrait of the artist standing against a tree trunk almost perpendicular to the ground, a feat he accomplished by holding onto a piece of bamboo.

Li describes the work as part of a search for a 'spiritual crutch', something to support him to have a better life, because he considers himself 'naturally disabled'.

In past works, Li has used his body to do difficult, painful things. He has repeatedly thrown himself in the mud, smashed hammers with another hammers in a way that sends shivers down viewers' spines, and devoted entire performances to bashing purpose-built towers of bricks into rubble.

Outside of his art practice, he spent a spell running through Beijing naked at night, sometimes holding a blow up doll, sometimes carrying a large wooden crucifix.

At MoMA PS1, Li showed alongside Zhang Huan, another Chinese artist who used his body courageously in his early work, sitting naked in a notoriously filthy Beijing toilet covered in honey and fish oil to create the work 12 Square Metres (1994).

Li's search for a spiritual crutch continues, sometimes setting him back in other aspects of his life.

'I'm very sorry that I couldn't reply to you on time,' Li told Ocula Magazine when we chased him up for answers to our interview questions.

'I fell off a waterfall while creating a new work and broke four bones. I need to go to the hospital for review and treatment from time to time these days,' he said.

In that work, entitled Blocking, Li climbed a tall waterfall in Hunan naked. Video of the performance will be exhibited at Mangrove Gallery in Shenzhen from 6 June until 28 August.

Li subsequently responded with some reflections on his condition.

'What I mean by "disability" may be a kind of inborn sense of lack,' he said. 'Sometimes, I need to use the fulcrum of the outside world to maintain my balance as a person.'

'It's often the out of control things that attract me,' he continued. 'I just regard myself as an experimental object and throw myself out completely in different ways to see what kind of feedback I can get afterwards. What am I testing? Maybe I want to get a kind of ability of regrowth, like a feeling that is fermenting in my heart and growing crazily.'

'I want to do something to extend this feeling and get pleasure from expressing it,' he said. 'I'm always trying to get close to it, even if I often fail.'

A board of 83 art professionals nominated mid-career artists from 30 countries for the prize. Thirty artists were shortlisted by a panel including writer, curator and museum director David Elliott; journalist Georgina Adam; artist Zhang Enli; art critic John McDonald; and Nancy Lee, Chairman of the Friends of Hong Kong Museum of Art.