October is the month when the international art scene flocks to London. With Frieze in the epicentre, parallel art fairs, independent and, of course, institutional exhibitions are all in full swing. Below we highlight the five must-see institutional shows in London this month.

Following the tradition of celebrating its Royal Academicians, the Royal Academy of Arts showcases the first major survey in London of the Honorary Royal Academician elected in 2011, Chinese artist Ai Weiwei. The exhibition begins from the Annenberg Courtyard and before even entering the main building of the Academy, viewers find themselves wandering around a constellation of eight naked seven-metre trees. This is the largest installation to date of Ai’s Tree, implemented with the help of a Kickstarter crowdfunding campaign launched by the Royal Academy. In the main building the show focuses on works produced from 1993 onwards, the year that the artist returned to China after spending over a decade in New York. Influenced by cross-cultural references of East and West, Ai debates and interrogates notions of heritage, and cultural and ideological authenticity in modern day China. Utilising an array of materials and mediums, he manipulates the hypostasis of objects powerfully associated with Chinese history, such as vases dating from the Neolithic age to the time of the Qing dynasty (1644-1912), pieces of furniture (like his clusters of wooden stools) and numerous architectural elements. Artworks such as Table and Pillar (2002) and Coloured Vases (2015) signify not only the relationship between the old and the new but also the fine line between the two conventions, which is not always transparent. 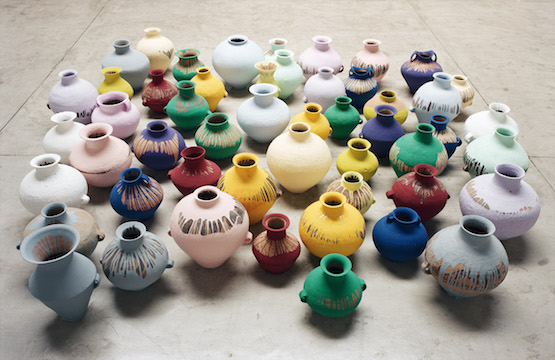 Ai Weiwei, Coloured Vases, 2006. Neolithic vases (5000-3000 BC) with industrial paint, dimensions variable. Courtesy of Ai Weiwei Studio. Image courtesy Ai Weiwei. © Ai WeiweiWalking through Wohl Central Hall with the grandiose chandelier, a cross hybrid of crystals and the artist’s Forever bicycles, viewers encounter perhaps the most inspiring installation of all; Straight (2008-12), a monumental piece commemorating the catastrophic consequences of the 2008 Sichuan earthquake that killed 70,000 people. Incorporating 90 tonnes of bent and twisted steel rebar rods used in reinforced concrete, the work evokes the detritus of a natural disaster and the ephemeron of human existence. The Ai Weiwei show offers a great opportunity for the British audience and visiting art enthusiasts to indulge in the work of such a provocative world-acclaimed artist. The exhibition was initially developed while Ai was still stranded in China with his passport confiscated until July 2015, when he travelled to London for the first time to oversee the final stages of his own show.

Working with a different discipline to express her artistic stance, young American artist and 2015 Frieze Art Award winner Rachel Rose, has taken over the Serpentine Sackler Gallery to present two of her recent videos. The two barrel-vaulted former gunpowder stores are used to host the videos while sound footage installed at the perimeter corridors compliments the show. A Minute Ago (2014) features a—what appears to be usual—summer day in Siberia where bathers are enjoying the waters of a river until their fun is interrupted by an anomalous and severe hailstorm. Evocative of a nuclear devastation, the landscape suddenly gives way to the tranquil minimalist environment of Philip Johnson’s Glass House in New Canaan, Connecticut, embedded with the architect’s own voice giving a tour of the house (rotoscoped from an old VHS) with his own ethereal image sporadically emerging and disappearing. 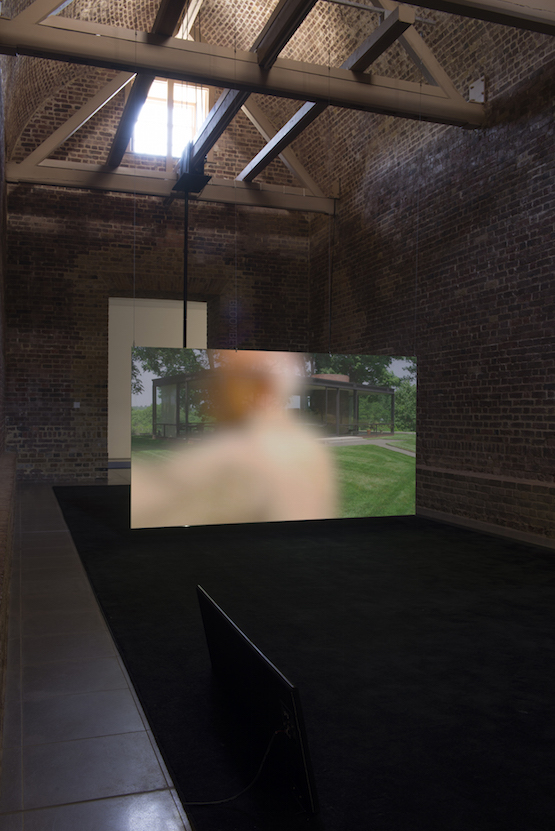 Exhibition view, Rachel Rose: Palisades, 2015. Serpentine Sackler Gallery, London. Photo: © readsreads.info. Courtesy Serpentine GalleriesContinuing to interrogate the diverse relationship between humanity and the natural environment, Rose created her second video, Palisades in Palisades (2014). Here, she renders a dialogue between the image of a young woman at the Palisades Interstate Park in New Jersey NY and historic and found material (maps, paintings) referencing the Battle of Fort Lee (1776), fought at the top of the Palisades during the American Revolutionary War. Transitioning between sound and image while concurrently each mode takes the lead throughout the gallery space, Rose’s videos pronounce not only the frailty of the natural world but also the human vanity for development and advancement at any cost. Her historical references echo the omnipresent need for domination of the fittest through imperialism, war and technology: terms incompatible with a consideration of nature and wildlife. 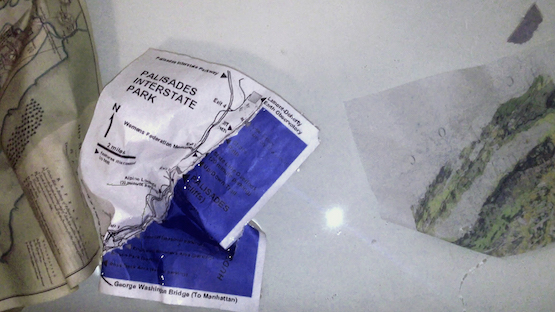 Going further up north to the Old Street area, Parasol unit honours abstraction by inviting painter Luc Tuymans to curate The Gap: Selected Abstract Art from Belgium. The show encompasses 39 works produced by two generations of Belgian artists, those born between the 1910s and 1950s (Gaston Bertrand, Amédée Cortier, Raoul De Keyser, Walter Leblanc, Bernd Lohaus, Guy Mees, Francis Alÿs, Philippe Van Snick and Jef Verheyen) and those born between the 1960s and early 1980s (Carla Arocha & Stéphane Schraenen, Gert Robijns, Timothy Segers, Boy & Erik Stappaerts, and Pieter Vermeersch). The exhibition emphasises the succession of abstract art from one generation to the other. Embarking from the influences of synchronous art movements that arose from the first generation such as geometric abstraction and abstract constructivism, De Stijl, Zero and the American Colour Field painters, the show surveys, in turn, the response of the younger generation of artists through their own artistic vocabulary and contemporary output. 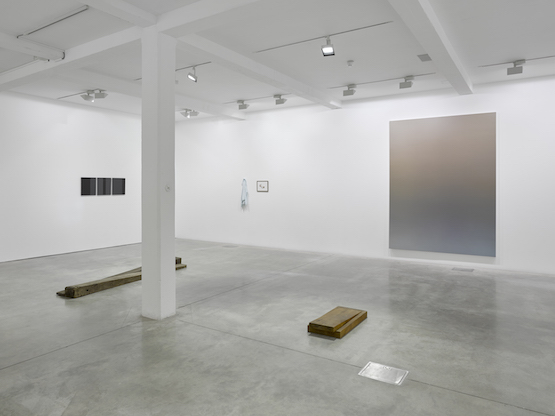 Exhibition view: The Gap: Selected Abstract Art from Belgium curated by Luc Tuymans, 2015, at Parasol unit, London. Photograph: Jack Hems. Courtesy of Parasol unit foundation for contemporary artThe exhibition spans the gallery’s two floors and has been visually dissected by Tuymans into works with brighter colours (downstairs-day) and those with darker colours (upstairs-night). Viewers navigate between generation—and their creative tensions, and explore works that push the boundaries of space and time dimensions, experiment with surfaces and manipulate the objectivity of image. Colour undeniably plays a pivotal role in the work of most of the featured artists, who investigate its properties and its impact on spatial reading and visual perception. The concept of reinventing object functionality is also observed in the majority of the works—an element that ascribes a sense of adventure and playfulness to the entire show. 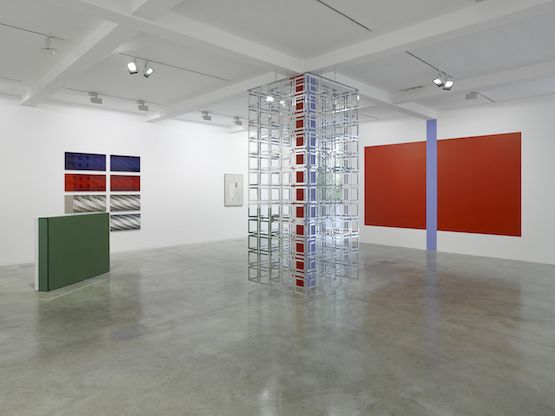 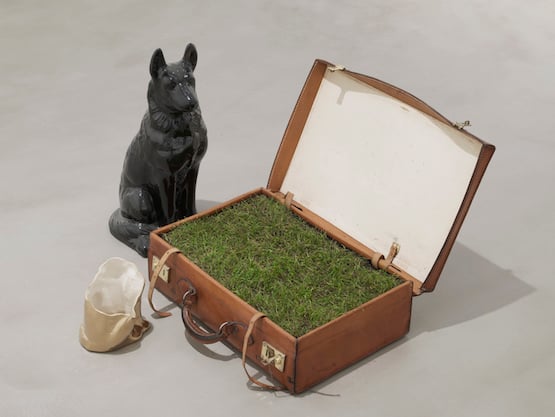 Kemang Wa Lehulere, Do not go far, they say, again, 2015. Commissioned by Gasworks. Courtesy the artist. Photo: Andy KeateGetting involved with the collectives Gugulective (2006-ongoing) and the Center for Historical Reenactments (2010-ongoing), Wa Lehulere canvasses the present juxtaposed against the past, and explores how the latter is able to afflict present situations and influence social change. The career of South African political activist Sol Plaatje (1876-1932) who fought for the liberation of African people and travelled to England to protest against the 1913 Natives' Land Act, followed by more journeys to Canada and the United States, had an enormous impact on the artist’s work. The forgotten play The Bird of Paradise (1912) by American playwright Richard Walton Tully is another point of reference in Wa Lehulere’s work. Employing an array of prominent figures of the past, and their accomplishments, the artist conveys notions of continuation or discontinuation of history and challenges cultural evolution and relative developments in the domains of politics and societal functioning. On many occasions, the burden of the past is deep rooted and incompatible with present reality, severely haunting the present time—an observation that permeates the entire body of Wa Lehulere’s practice. 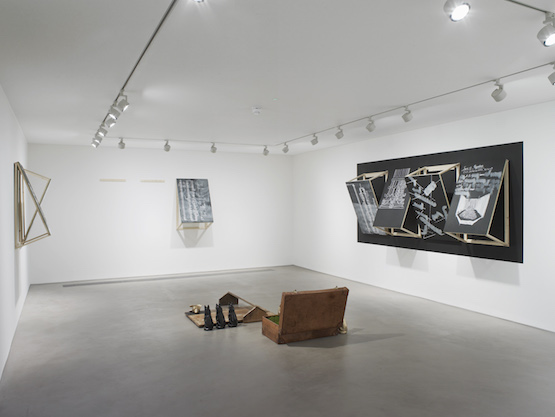 Institute on Contemporary Arts (ICA)
Prem Sahib: Side On
Until 15 November 2015

Our final stop is The Mall, where London born and based artist Prem Sahib has taken over the Upper and Lower Galleries of the Institute of Contemporary Arts (ICA) with his first solo institutional exhibition in the UK, Side On. With recent and new works comprising sculptures, installations and performance, Sahib investigates interpersonal and interspatial relationships and situations, highlighting the architectural arrangement of his chosen loci. Focusing on the particularities of certain social groups such as gay communities in big cities like London and Berlin, he explores the employment of certain spaces as meeting points, filtered through a sense of community, sexuality and sexual expression. Through a clear commentary on diverse social topographies, Sahib exposes concealed functionalities of several locations such as nightclubs and other cruising spots. His visual language redefines and readdresses the initial purpose of a place by exposing new realities. Works such as Outer Wear (2015) and Looking for One (2015) are renderings of architectural details within larger buildings, whereas Taken by Your Equivocal Stance (2015) echoes the active presence of a community through a mutual dress code. Influenced by the minimalism of the 1960s and early 1970s, Sahib transcends his work with a hint of abstract geometric aesthetics. The use of an array of materials such as ceramic tiles, and polished steel and glass, complement his endeavours to portray the interior of selected spaces. The exhibition is accompanied by numerous events such as artist talks and tours and a one-off live DJ set—with artist Jeffrey Hinton simultaneously presenting the screening of his film project UNPLUCT and inviting guests to be in white on the night and enjoy the sounds of 1970s classics. —[O] 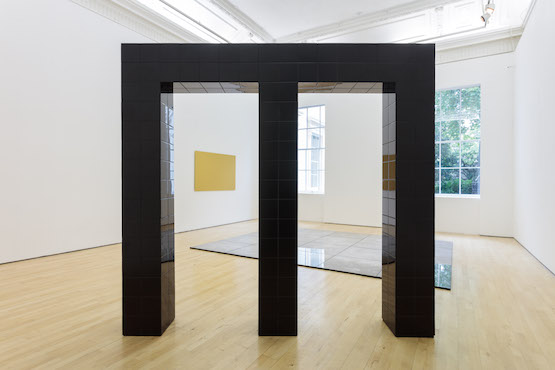