‘Organising Wherever You Are’: Art and Praxis at Para Site Conference 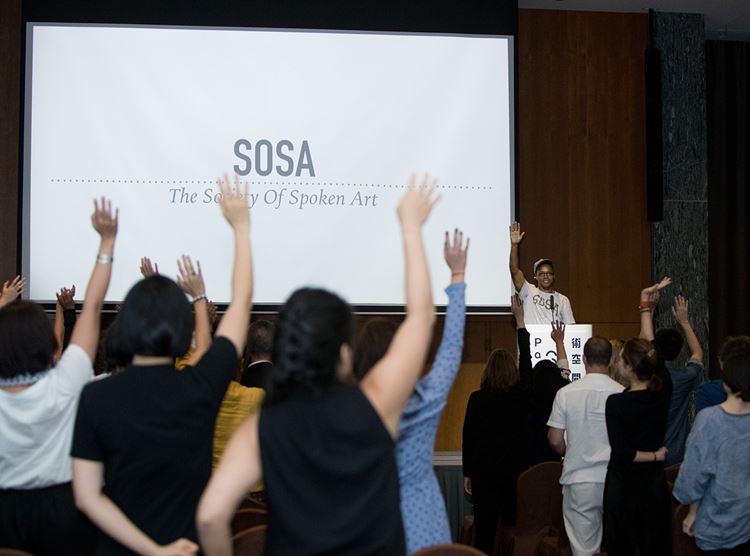 'Where do Turkeys originally come from?' asked Sugata Ray, associate professor of South and Southeast Asian art at Berkeley University, as he inquired into the possibility of a post-anthropocentric approach to art history. Ray was one of the 14 invited speakers at Para Site's annual conference in Hong Kong (10–12 October 2019), organised in dialogue with Berlin-based art institution SAVVY Contemporary's 'Spinning Triangles' project.

Taking the 100th anniversary of the Bauhaus School's founding as a point of departure, this three-day gathering repositioned perspectives in design practice, theory, and teaching, with speakers including Lupe Fiasco and Simon Soon presenting case studies of resistance, knowledge exchange, and networks of artistic solidarity. 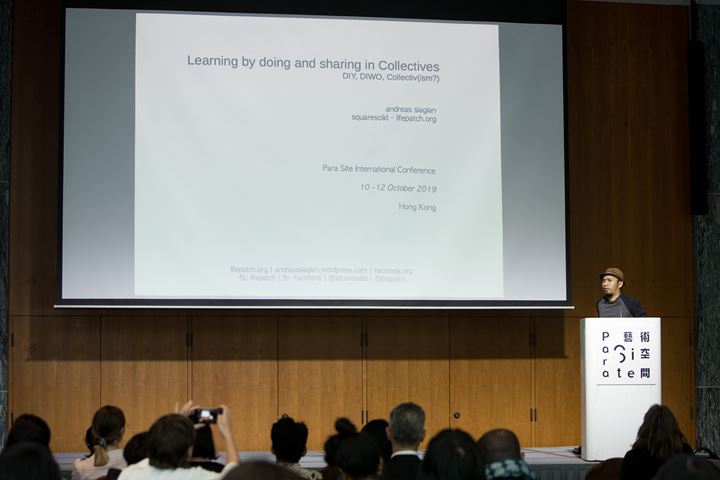 The first day opened with a talk by artist-engineer Andreas Siagian on the growing emergence of art collectives in Indonesia, which set the tone for a larger discussion on how the ethics of friendship define creative communities. Discussing his work in the Lifepatch collective, a citizen art initiative blurring the boundaries between art, science, and technology, Siagian emphasised the spirit of D.I.Y. practices in the development of creative local solutions. The project Intelligent Bacteria: Saccharomyces cerevisiae (IB:SC), for instance, developed new fermentation techniques to produce cheap beer for Indonesians—emblematic of the type of community-oriented learning that Lifepatch members are interested in fostering. Beyond expanding on Lifepatch's D.I.Y. projects to address the opportunities and challenges of working with others, Siagian concluded his talk by underscoring the fact that working collectively also means knowing and potentialising the weaknesses and vulnerabilities of each other.

Building upon the economy of friendship, Filipina-Spanish cultural worker Clara Balaguer, afterwards spoke about her Manila-based publishing and design studio Hardworking Goodlooking. Balaguer touched on the construction of a transnational community working from places as far away as Laguna, Rotterdam, Portland, and Brooklyn. Reflecting on this network was this 'composite' talk, written collectively by all four members of the studio—Balaguer, Kristian Henson, Dante Carlos, and Czar Kristoff—in the form of a testimonial reflection that combined Balaguer's commentary with digital voiceovers, which they humorously titled 'Desperately Trying to Finish (Each Other's Sentences)'. Speaking to the larger landscape of independent publishing, artist's books, and zine culture in the Philippines, the talk also addressed the conditions that led friends to move away from home in search of opportunities beyond local and familial spaces, and the resulting emotional cost of being away from the people you love. 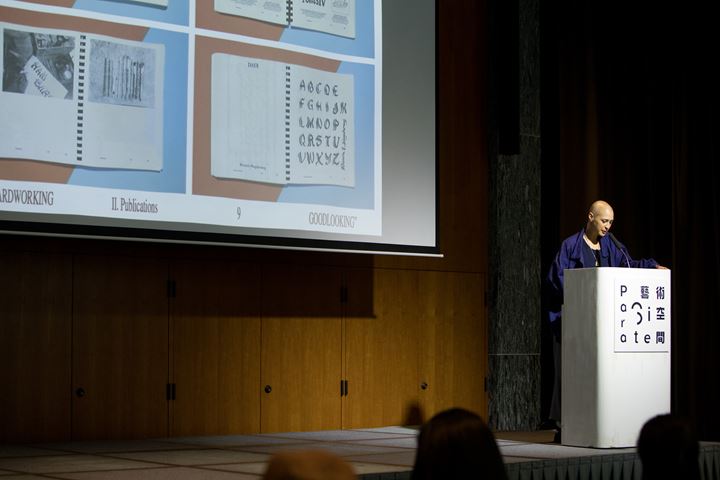 In a similar tone, artist and scholar Christian Nyampeta presented notes on the notion of living and working together, anchored to his research on the concept of an 'evening school', which follows Senegalese writer and film director Semebe Ousmane's model for vernacular engagement and collective learning experiences. Premised on practices of discontinuity, rupture, and montage, Nyampeta is concerned with cinema's potential for generating places of encounter between peoples and histories, especially those of Africa. Building on the concept of the scriptorium—a place of collective writing used throughout the Middle Ages by scribes in monasteries—Nyampeta further articulated a methodology for story-telling and being with others, which he now incorporates as part of his artistic practices, as he made evident in his current show at the SculptureCenter in New York City, École du soir (The Evening Academy) (16 September–16 December 2019).

The second day of the conference pertained to institutional ruptures, with curator and writer iLiana Fokianaki's talk 'New Violence of Power, with Art as a Counter-proposition', not only delineating the paradoxes of nationalism in an expanding global transnationalism, but also inquiring into the role—and at times neoliberal mentality—of art institutions. Fokianaki underscored the ways cultural capital, museum collections, and tourism all play a role in upholding systems of colonial domination by validating the continued power asymmetries that consolidate the modern-colonial world system. As a finishing point, Fokianaki situated her work at the independent arts organisation she founded in Athens, State of Concept, presenting examples of recent projects developed around socially engaged, community-oriented, and politically aware practices that are relevant and provocative today in the face of increasing neoliberal violence, the rise of white supremacy, and far-right governmentality. 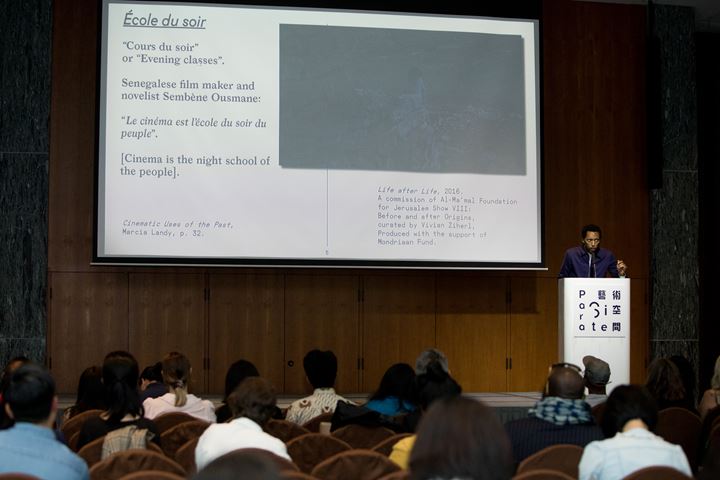 Sebastian Cichocki, the chief curator of the Museum of Modern Art in Warsaw, tackled creative forms of institutional reinvention through the case study of his home institution, which is today undergoing a number of renovations in both its physical structures as well as within its exhibition and public programming. The cornerstone of Cichocki's talk was the concept of 'post-art', as conceptualised by Polish art critic, curator, and historian Jerzy Ludwiński in 1971, who said, 'Perhaps even today, we do not deal with art. We might have overlooked the moment when (art) transformed itself into something else, something which we cannot yet name.'[1]

Cichocki related Ludwiński's perspective to the contemporary moment with his own interpretation of 'post-art', which Cichocki defined as 'a long-term artistic practice that does not lead (or only occasionally so) to the creation of a material work of art capable of a clear-cut allocation of authorship', which is 'also inaccessible to the viewer by the means of the conventional apparatus of distribution: the work of art–studio–exhibition–museum' and 'can be part of other para-artistic systems such as economics, political activism or horticulture.' Following his characterisation of what Ludwiński called more generally, the 'post-artistic era', Cichocki additionally discussed the ways museums today are championing a variety of practices that privilege activist, feminist, and ecological expressions: projects that, according to the curator, respond more adequately not only to local communities, but also to our so-called 'interesting times'. 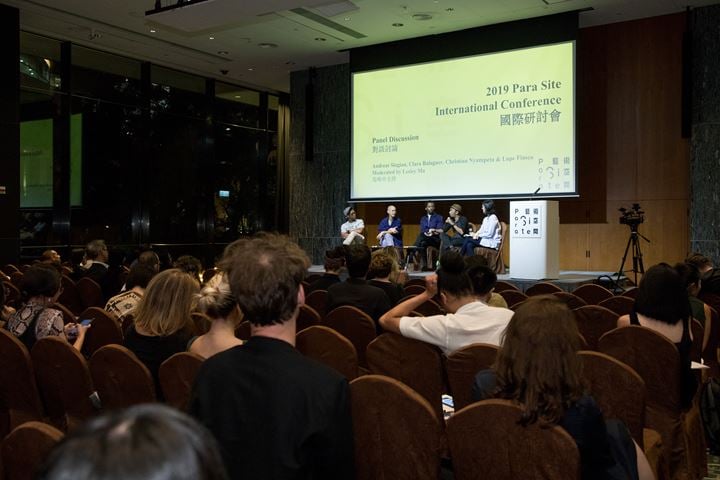 Other talks poignantly raised the question of decolonisation through embodied research practices. Recounting the history of the dispossession of the Banaba peoples by colonial exploitation of the Ocean Island since the early 20th century, Katerina Teaiwa, associate professor in the School of Culture, History and Language at the Australian National University, retraced the trajectory of her family's displacement as a result of phosphate mining. The artist discussed Project Banaba, an ongoing commitment to making visible the silenced stories of her territory through an exhibition project that collects and brings forth lived memories of the Banaba community—evidence of resilience, resistance, and survival rather than extinction.

Following this notion of re-tracing, Ema Tavola, an artist-curator from South Auckland, New Zealand, gave a lecture titled 'Lain Blo Yu Mi – Our People Our Lines', about recovering tattooing practices as a means to reclaim the body as site of resistance. Underscoring the impossibility of translating, and more generally of theorising on her curatorial practice, Tavola embodied what decolonial scholar Walter Mignolo called the body-politics of knowledge. That is, epistemologies that are generated from the corporeality of our lived and cultural experience. In further elaborating on the political as well as symbolic importance of tattooing among her most immediate community, Tavola described a practice dedicated to vindicating the type of knowledge that is constructed from rebuilding a society's historical consciousness. 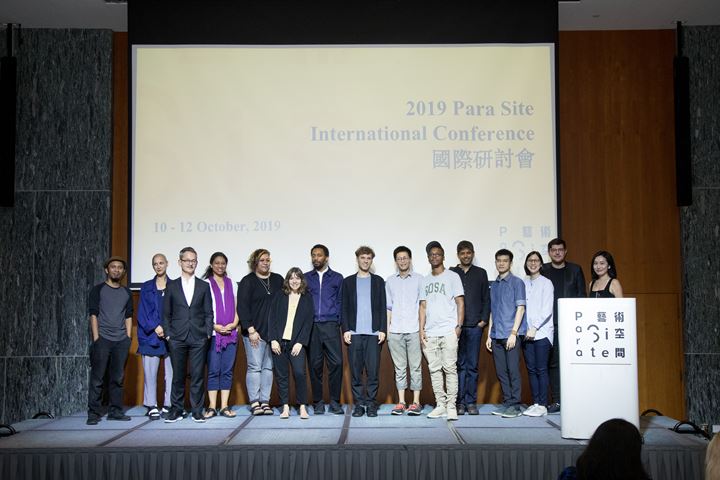 The final day culminated in a panel discussion moderated by Tai Kwun's Education and Public Programmes Curator Melissa Lee, with panelists Lawrence Chua, Pan Lu, Teren Sevea, Tan Zi Hao and Ema Tavola addressing overarching notions of social construction through historical monuments, queertopias, and composite creatures. During the discussion, Lee confronted an urgent present-day concern by asking provokingly what constitutes citizenship and what holds a community together. A re-definition of these concepts is what is ultimately manifesting in the public sphere through the wave of mass protests unfolding globally, from Hong Kong to Chile and Lebanon, with people taking to the streets in order to embody rather than discursively define the notion of citizenship (and of community) in the face of state oppression and police brutality.

Though the political context of the protests taking place in Hong Kong was not addressed by the organisers or speakers, the topics discussed certainly related to what was happening in the city: namely, how to work collectively and unlearn together in order to imagine autonomous, feminist, and decolonial futures. As noted by Cichocki, there is a need to engage in a 'rewilding' of artistic praxis that enables an imaginary untethered to existing structures of power.

Considering how the local is irrevocably tied to the global, the conference was an opportunity to see how invited panelists have mobilised within their own local emergencies, against the backdrop of an emergency taking place in real time. All of which brought to mind something a member of the Zapatista Army for National Liberation once told me: 'Being in solidarity with others is knowing the imperative of organising wherever you are.' —[O]