It took some time to reflect on Roppongi Crossing 2013: OUT OF DOUBT, and for good reason. This was the fourth edition of a triennial exhibition established in 2004 by the Mori Art Museum in Tokyo. It was a sprawling retrospective of sorts, which differed to past iterations in that the focus––usually trained on young artists born in the 1970s and ‘80s working in Japan––widened its reach to include artists living and working abroad, foreign nationals of Japanese descent, and an older generation of postwar artists.

This expanded overview––29 artists in total––was not the only thing that made Roppongi Crossing 2013: OUT OF DOUBT stand out. As gallerist Shugo Satani noted, aside from providing a survey of Japanese art practices, the exhibition also situated these practices within the context of Japan after the Great East Japan Earthquake of 2011. The aim of the curatorial, conceptualized by Reuben Keehan of Queensland Art Gallery, Gabriel Ritter of Dallas Museum of Art, and Mori Art Museum Chief Curator Kataoka Mami, was to look at Japan from multiple perspectives. The result, as Mori Art Museum Director Nanjo Fumio wrote, was an “initiative to reconsider and fundamentally question accepted notions and established systems in today’s Japan through the lens of contemporary art.”

The exhibition opened with a wall made of chairs and clothes stacked one on top of the other by Kobayashi Fumiko evocatively titled, The Island Over There (2008). Behind this wall was a suite of graphic works by veterans Akasegawa Genpei, Nakamura Hiroshi (both were featured in the 2013 exhibition Tokyo 1955-1970: A New Avant-Garde at MoMA), and Kazama Sachiko. Here, Hiroshi’s oil on canvas paintings from the 1950s and ‘60s, vibrantly-coloured and intricately composed, stood out against the more visible relationship between Genpei’s black and white comic strips and Sachiko’s graphic woodcut prints of dystopic futurescapes. The themes across these three artists were telling: Hiroshi’s titles included The Dictatorship of Sightseeing (1965) while Sachiko’s, some of which were produced in response to Fukushima, included Defenseless Fort (2013) and Prison NUKE FISSION (2012). Of Sachiko’s woodblock paintings was an image of the famous Shibuya crossing, reimagined as a post-apocalyptic militarized zone with people depicted wearing masks, as fighterjets fly overhead and fireballs fall from the sky in Drawing for a Nonhuman Crossing (2013).

This play with reality in Sachiko’s rendition of Shibuya––the visualization of a dystopic present––was also explored in the startling and compelling video work, Death Poem for a City (2013) by Koizumi Meiro. In this double screen installation, individual Tokyo-ites are presented on one side of the screen wearing balaclavas to mask their faces; only their mouths are visible, as they are interviewed about their deepest, darkest secrets and desires. A man admits he would kill if knew he wouldn’t get caught; a woman desires to be dominated. On the other, images of Tokyo are projected in edited flashes: people walking on the streets, political demonstrations. The audio is a clusterfuck of sound; coming from both sides of the screen, it skips from the long, drawn out confessions in a silent room expressed in hushed, stunted and hesitant paces, to sudden moments of warped, static sound coming from a mash-up of city noises which interrupt the confessions.

Meiro’s expression of repressed desire, hidden drives and frustrations, and untold secrets, was a popular work in the show. In many ways it was fitting that this work was followed by some of the more overtly political pieces included in this exhibition, presented by Niwa Yoshinori, which included a 2010 performance piece Yoshinori executed in Romania. Driven by curiosity for the legacy of communism and the story of Nicolae Ceaușescu, the artist enlisted a group of non-communist youths to toss a “genuine” communist in the air as a celebration, aptly titled: Tossing Socialists in the Air in Romania. Paired with this was a 2013 work, in which Yoshinori engages with the Communist Party in Japan in an attempt to challenge (and reconcile) the party’s non-revolutionary platform with its Marxist foundations. The result was video/installation, Proposing Holding Up Karl Marx to Japanese Communist Party, in which a video presents Yoshinori’s engagement with the party and the banner of Marx that was indeed held up in the end.

Yet, not all exhibits were of the socio-political persuasion. The exhibition abruptly changed direction halfway, turning towards more object-based practices, from Kaneuji Teppei’s sculptural assemblages and wood panels to Okumura Yuki’s fluorescent, minimalist surfaces. This halfway point between conceptual practice and object form was perhaps marked by Simon Fujiwara’s video lecture-cum-installation, The Problem of the Rock (2013), in which Fujiwara considers the Shinto belief that all things in nature are inhabited by divine spirits, which thus extended onto wider questions surrounding the faith and value we place on objects, including art works. Following this train of thought––that artworks might contain a spirit of some kind––Ryui Koji approached the idea of an object’s life force from a different angle. In his installation HAVE A NICE DAY (Horizon, Untitled, Bachelors, Mirror, Emoticon) (2013), Koji took generic “have a nice day” plastic bags complete with big, round, yellow smiley faces, and filled them with plaster so that they might form worm-like shapes, which Koji proceeded to place on shelves, each positioned in some kind of animated pose; looking up, for instance, or looking down. The installation illustrated Koji’s belief that art is a framework in which inanimate objects might be imbued with forces that exceed their form and utility.

In all, it was this balance between consideration and play that made Roppongi Crossing 2013: OUT OF DOUBT, an illuminating show. It balanced a certain weighted spectre with a lightness of touch. There was no denying the legacy of 2011, which was the focus for many of the works presented, and which has, even beyond this exhibition, become a concern for many artists now working in Japan. The influence was most notable in the daguerreotype prints by Arai Takashi, in which the artist produced a trans-historical investigation between the legacies of Hiroshima and Fukushima. Images included those of the fishing boat whose crew was exposed to the fallout from US nuclear tests in 1954, and the Trinity site in New Mexico, where the first nuclear device was detonated in July 1945.

Yet, the tragedy of Fukushima, and the nuclear legacies from which this disaster is rooted, was offset in another work that marked the end point of the show: an installation by project FUKUSHIMA!, which was an action instigated by musicians Endo Michiro (who was born in Fukushima prefecture), Otomo Yoshihide (who lived out his teenage years in Fukushima city), and poet Wago Ryoichi (who was born and continues to live in Fukushima city). Here, they presented video footage of a music festival the project organized in August 2011 in the municipal park Shiki no Sato, for which they covered 6000 square metres of grass suspected of radiation exposure, with a giant, quilted carpet made of cloth donated from all over Japan––part of which was recreated for this installation.In the exhibition, the Project FUKUSHIMA! installation served as a venue for events and talks; recreating the sense of community that was engendered by the festival itself, attended by 13,000 people and watched online by a further 250,000. The intention for this installation at Roppongi Crossing 2013, and for the exhibition as a whole, was the same as it was in 2011, when the festival was staged some two-and-a-half years ago. It was an open invitation to the public to confront their reality, together, and over time. — [O] 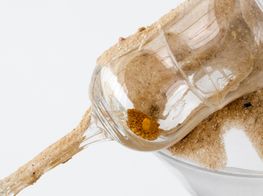