Shanghai Gallery Round Up, May 2015

Three spirits manifested themselves in three Shanghai exhibitions this spring. Hiraki Sawa saw the past decay too quickly at James Cohan Gallery, a group of artists entrenched themselves at BANK to confront the incessant present, and a happening at Basement 6’s new space hinted at a better time yet to come.

Japanese-born, London-based artist Hiraki Sawa has been represented by James Cohan since graduating from the Slade School of Fine Art, London, but this is his first show in Shanghai. The main entrance to the gallery was closed and access moved through the office to keep new visitors from breaking the spell cast by his ethereal, otherworldly video works.

The exhibition’s central piece, Lineament (2012), is part of a larger project responding to an acquaintance’s sudden onset amnesia; waking from a nap he discovered he had completely lost his memory. The two-channel video is supported by a record player modified by Sawa to play forwards and backward—a musical palindrome. Similarly, the flow of biographical time has been upset in this piece; it’s no longer linear.

Inside a modest seaside house, we see a man’s world apparently come undone. Clockwork mechanisms continue to tick and whir as lines sketched over windows undraw themselves. The man appears to hang from the ceiling, his neck bent where it meets the floor, his autobiographical disorientation made literal. “Lineament” means both a line that describes an object and a topographical feature created by an underlying fault or fissure. Here, the neurological or psychological basis for the man’s condition remains mysterious even as its effects appear to utterly and irrevocably transform his life.

Other works are equally spectral and psychological in this show, with Sawa making use of mirrors—both in the gallery space and the videos themselves— as well as clever editing to fracture the identity of a woman dressed in white. The work, entitled Envelope, seems a mirror image of Lineament with the woman repeating actions, fixed by time, as if by a trauma, unable to cohere and continue on. 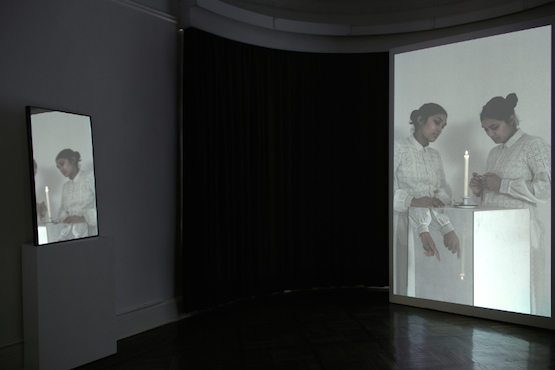 The press release for Vive le Capital quotes from Arandhati Roy’s Capitalism: A Ghost Story: “If the sledgehammer of moral purity is to be the criteria for stone throwing, then the only people who qualify are those who have been silenced already.” In this powerful show, curated by Wang Xin, Christoph Draeger and Mathieu Borysevicz, BANK draws together 23 artists from around the world to explore  the relationship between capital and art drawing out the conundrum these artists face in critiquing a system they are always destined to be complicit with.

The gallery’s own history draws attention to this creative conflict. Housed in the former Bank Union Building, a product of Shanghai’s colonial trade history, BANK is just blocks away from the city’s most expensive real estate, right across the Huangpu River from it’s new financial district.

Gianni Motti’s Money Box sees one dollar US bills (representing the sum total of the budget for the work’s production, and its only element) hanging from the ceiling like photos in a dark room as if left to develop into something more—its meaning to accumulate compound interest.

On an old cathode-ray-tube television, Cai Guo-qiang appears sitting in an armchair explaining the beauty of his works in the shameless infomercial Art Shopping Network. Semi-dressed male and female models languor by pieces for sale, the prices clearly displayed as graphics. A phone number is embedded onscreen ready for an impulsive shopper to drop 99,000 RMB on one of Cai’s works.

Cai Guo-qiang, Art Shopping Network, installation, 2005Wang Sishun’s Uncertain Capital is another work whose form is determined wholly by its worth. Each time the work is sold at a higher sum, the fee is converted into coins and melted again. What started in 2009 as a small ingot melted down from 300RMB in one Yuan coins has grown to the size of a bucket.

Wang Sishun, Uncertain Capital, one yuan coins, 2009-2015Vive le Capital also introduces musings on copyright, an essential evil for most contemporary artists in an age of easy reproduction. Wall text sourced from Wikipedia by Heman Chong and Marcus Yee describes how the song “Happy Birthday to You”, adapted from the 19th century ditty “Good Morning to All” and copyrighted in 1935, now makes US $2 million per year for Warner/Chappell Music.

Not as high grossing but even more engrossing is Kevin B. Lee’s desktop documentary TRANSFORMERS: THE PREMAKE. Filmed entirely on the desktop of his computer, Lee turns 355 Youtube videos from Transformers: Age of Extinction shoots at various locations around the world into an utterly compelling investigation of the topsy-turvy new global movie market. Gratuitous plot diversions—taking production to Hong Kong and mainland China—pander to the massive new Chinese audience while Detroit stoops to advertise its merits as a location with the tag line “Detroit: we’re cheap and easy”. Kevin B. Lee, TRANSFORMERS: THE PREMAKE, video, 2014In one of the Youtube videos not removed at the request of the movie’s backers, Detroit resident MrSan44Man captures footage of a building-sized billboard for Chinese Vogue used as one of the props in the film. America’s “Motor City”, a perfect location for a Transformers film, instead becomes an ersatz Shanghai.

Opting out of the proprietary wars (almost) entirely, Basement 6 Collective held its re-launch last month after taking a break, except for its WeChat social media residency, over the winter. The new show was a riot of marginal and uncategorisable activities including a photoshop composite of an artist’s face on Xi Jinxing’s body, collages, experiments in democratised painting and an incredible seizure-inducing Gif-powered game of four-player pong engineered by Bryan Fisher.

This undead existence, rising (or disappearing?) from beneath the earth only to return to it, remaining literally and figuratively underground fits Roy’s description of the uncompromised artists: “Those who live outside the system; the outlaws in the forests, or those whose protests are never covered by the press, or the well-behaved dispossessed, who go from tribunal to tribunal, bearing witness, giving testimony.”—[O]

The new commission is a standout feature of the Sydney Modern Project, an AU $344 million dollar expansion to the Art Gallery of New South Wales (AGNSW) that opens on 3 December.

Mounira Al Solh's new paintings explore sounds across the Arab world, their histories, and the clamours of revolution.