The Equilibrists: A report from Greece

It was an interesting turn of events, arriving in Greece one year after Alexis Tsipras and Yanis Varoufakis called what has now become a notorious referendum: the vote that divided the country in two, and pitted children against parents; friends against friends. Watching Brexit unfold from the warm coast of the Mediterranean Sea was surreal enough, especially when considering the difference with which both nation-states dealt with their vote. On this side of Europe, there was almost a sense of vindication—the Greeks, as it turned out, were not the village idiots of the EU after all.

And it was within this frame that Greece’s cultural summer opened: with a kind of cautious optimism reflected in a series of major cultural initiatives, some new, others not so new. There was the four-day programme of events celebrating the completion of the Renzo Piano-designed cultural project that is the Stavros Niarchos Foundation Cultural Center—a gargantuan complex located on the southern coast of Athens funded by the Stavros Niarchos Foundation and gifted to the state. The programme included an international video exhibition, Fireflies in the Night ( 22-24 June), organised by critic Robert Storr, former Dean of the Yale School of Art, with curators Barbara London, Kalliopi Minioudaki and Francesca Pietropaolo. Then there was the opening of a David Hammons exhibition at the George Economou Collection; the third annual summer solo exhibition featuring an internationally renowned artist. (The first was Taryn Simon in the summer of 2013). 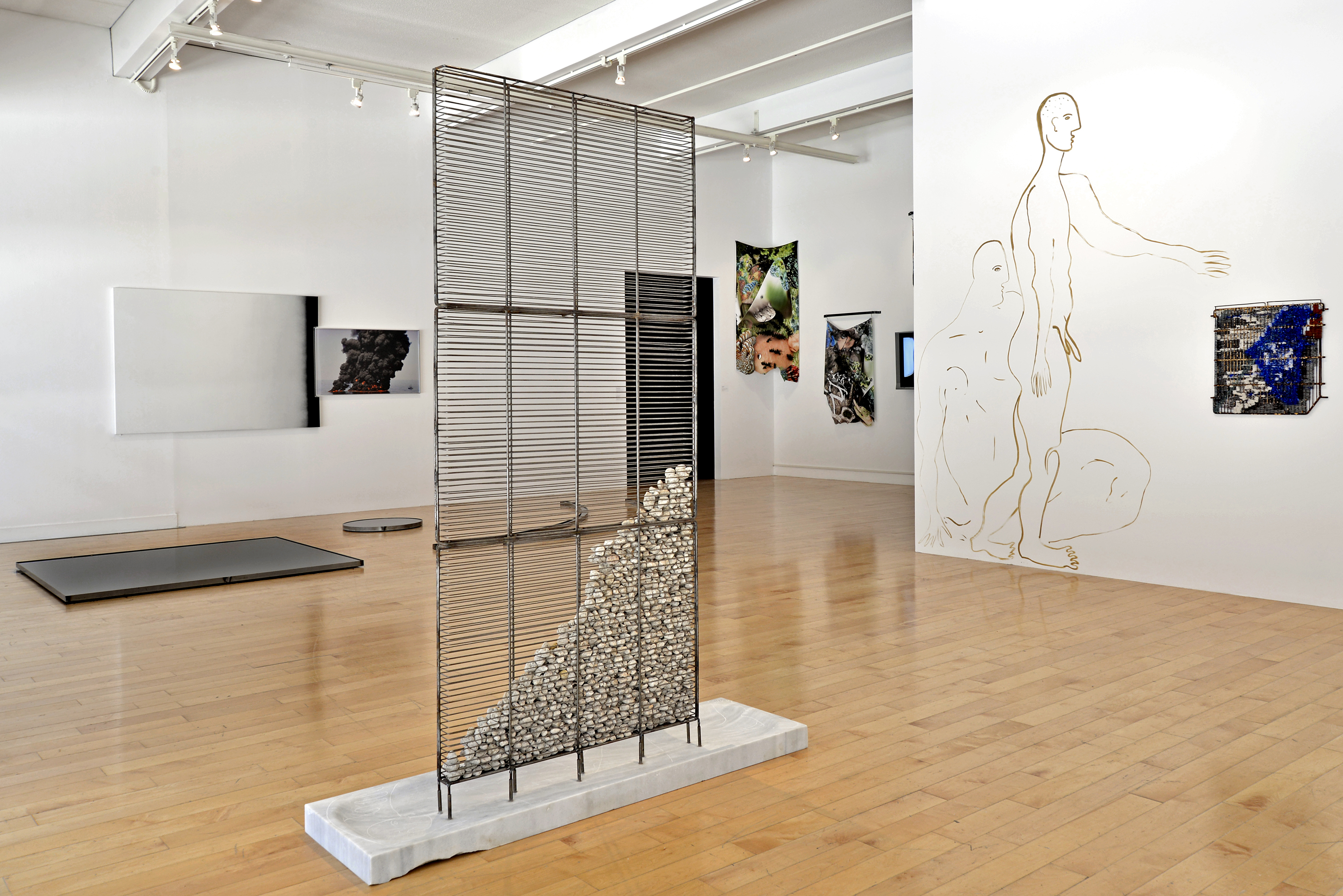 Of the more established summer events on the Greek calendar is Dakis Joannou’s much-anticipated DESTE Foundation series of summer shows. These usually take place at the Benaki Museum on Pireos Street in Athens, and at the DESTE Slaughterhouse project space on the island of Hydra. The DESTE-Benaki Museum show, The Equilibrists (17 June – 9 October 2016), was organised this year with the New Museum, New York, and marked—in part—DESTE's 33rd anniversary. In keeping, the show presented 33 contemporary Greek and Cypriot artists selected by New Museum curators, Gary Carrion-Murayari and Helga Christoffersen. With a frame reflecting the New Museum’s approach to its own triennial—whereby it focuses on emerging artists—the show offered a platform upon which to explore a new generation of contemporary practices. 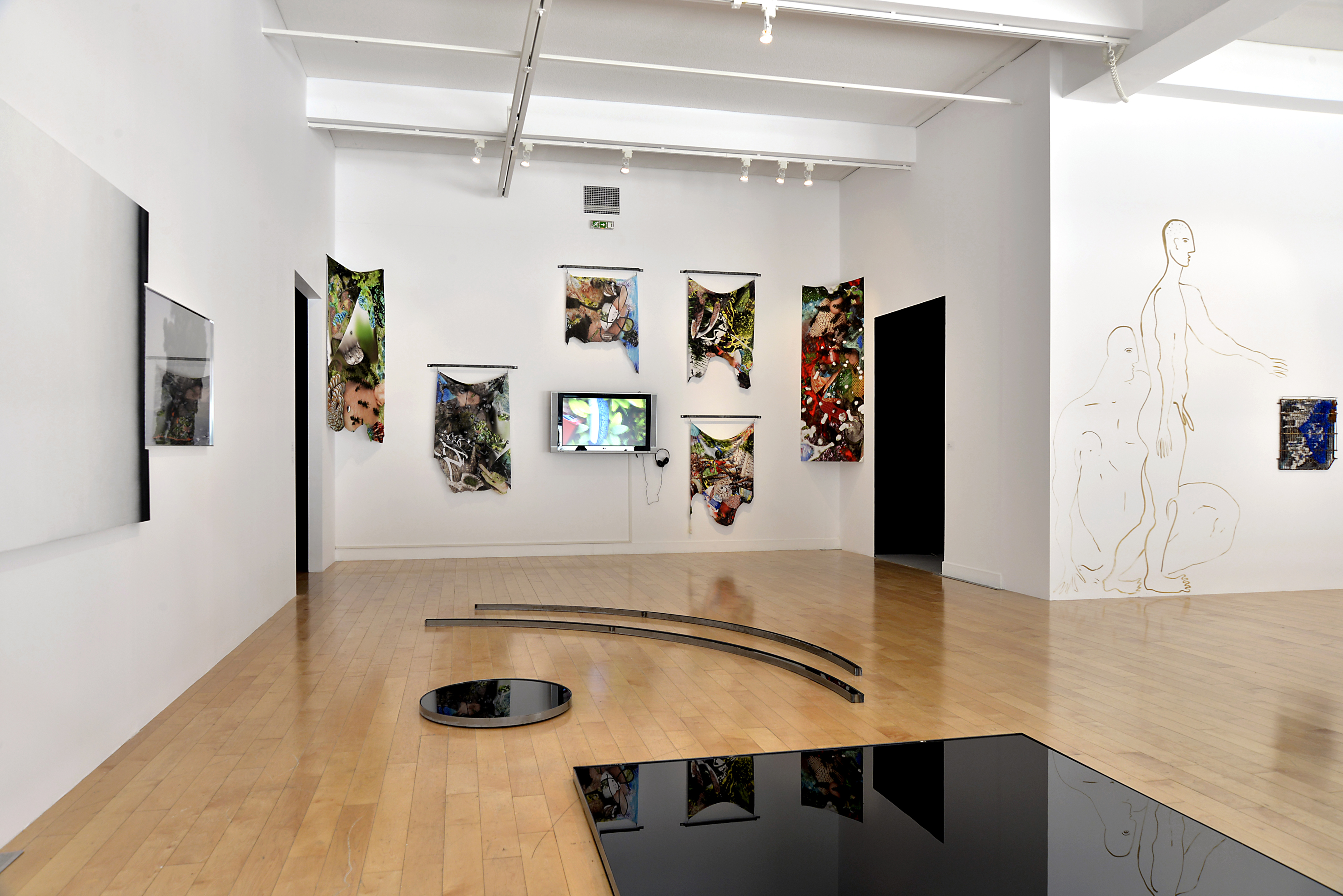 The measure of history was palpable in this exhibition, as remixed in the works selected. In the case of Petros Moris and Eva Papamargariti, we see a fusion between ruin porn and post-digital aesthetics; in Moris’s case, plaster casts laid out over iron grille, and in Papamargariti’s case, digital fabric prints hung like flags around a digital animation of a summerscape over which a digital voice speaks. In the case of Zoi Gaitanidou’s excellent woven canvases, vibrantly rendered tribal figures appear in jungle landscapes articulated in rich forest colours. There is palpable sense of fantasy, horror, and ironic whimsy in some of the practices on show. Malvina Panagiotidi’s haunted houses of Athens rendered in the beeswax of Orthodox candles conjured the ghosts of Greece’s modern history, while Loukia Alavanou’s edit for The Green Room (2015-16) offers a 3D video remix of various scenes from horror films presented as a narrative about—essentially—paying the rent. In Orestis Mavroudis’ 2013 video, Attempt to Fly (2013), we see a man attempting to fly in a field with a contraption that will clearly never work. 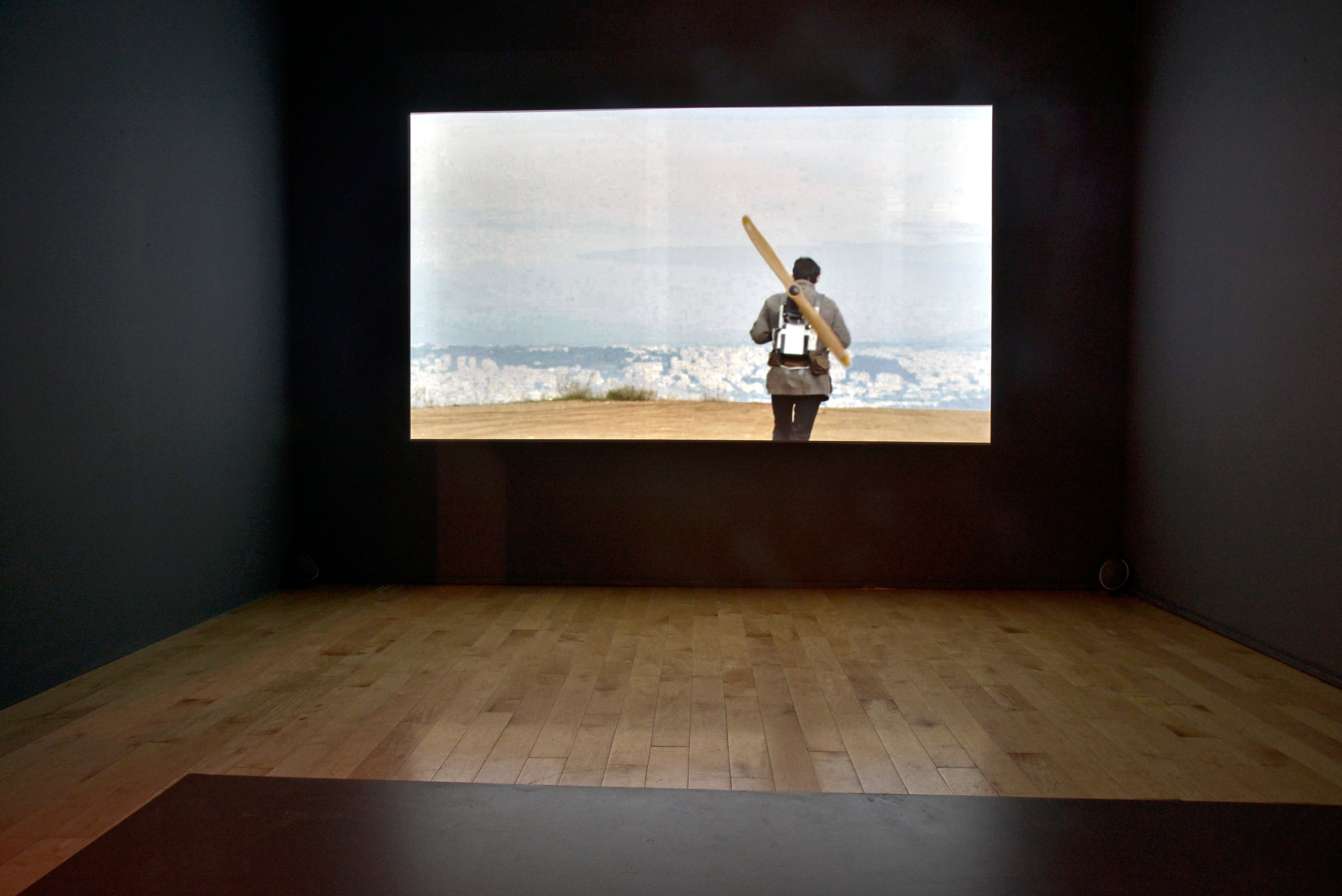 Indeed, in this exhibition abstraction is firmly rooted in the real; from the formal shapes expressed in Silent Hysteria (2015)—Manolis Daskalakis-Lemos’s handsome iron tanks filled with black oil—to Irini Miga’s broken down interior, A Place from a Different Timeline (fragment), (2016), which presents the outline of a small flat using such items as wooden rods, dry wall, and metal wire, with small handmade details added to the setting. The work is perfectly positioned next to Eleni Bagaki’s searing take on contemporary love, She Was Whistling, He Was Shooting (2016). The installation includes a soundtrack, a video on which the lens focuses on a pair of white sneakers connected to legs basking in the sun in a park somewhere, and t-shirts framing the projection with such phrases as ‘Tears made his dick hard’ printed on them. 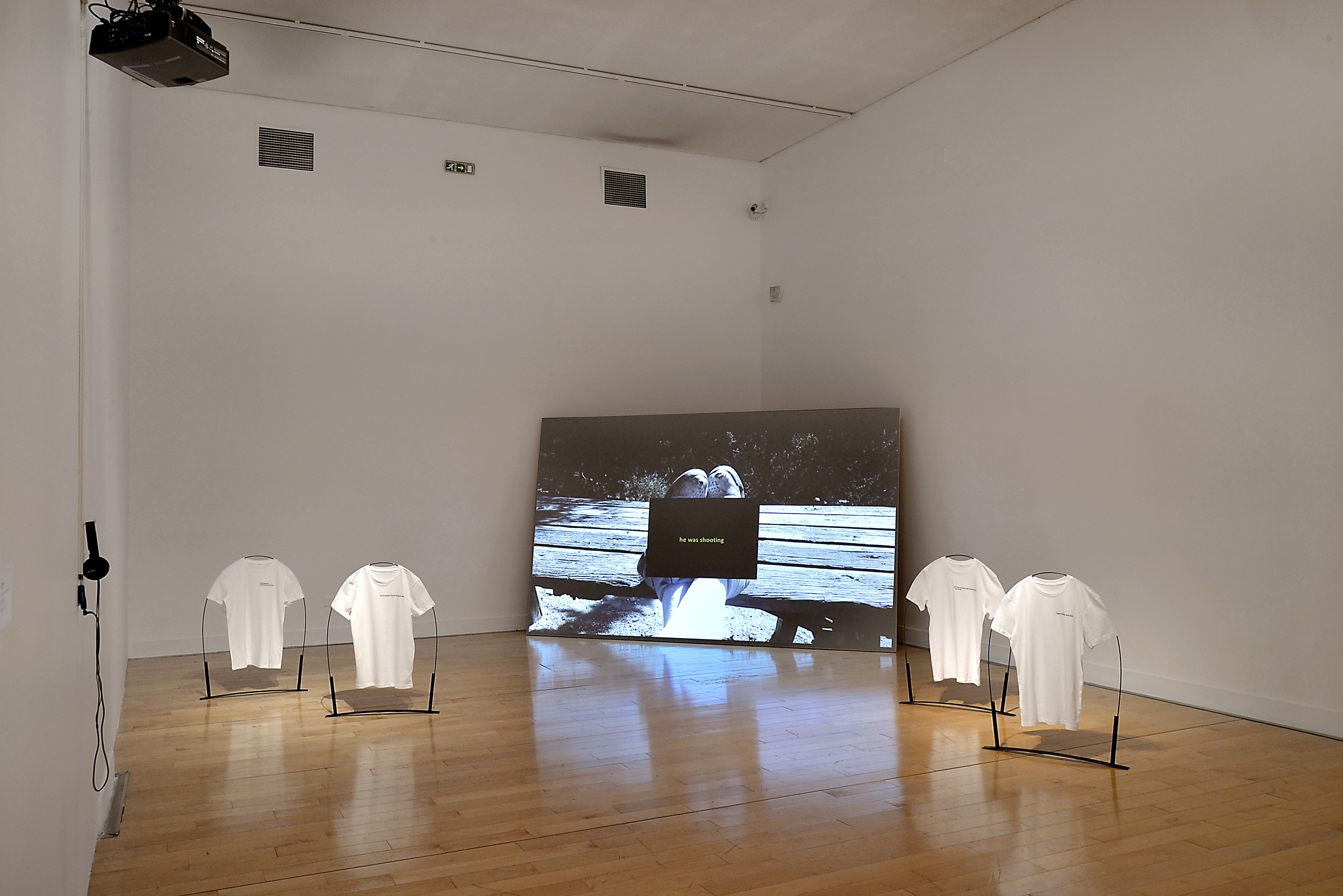 The second part of DESTE’s summer show consisted of an opening performance at the Slaughterhouse on Hydra titled Putiferio (which in Latin means ‘bring the stink’, ‘chaos’, or ‘a small taste of hell’), for which Roberto Cuoghi fired clay and metal crabs to fill DESTE’s project space (a former slaughterhouse) in kilns built outside and above it, apparently modelled after various cultures (and constructed by following YouTube videos). The result is a mesmerising installation (on show to 30 September 2016) that is bound to context, in that it was the island that inspired Cuoghi to produce such an intervention, not to mention the long tradition of kiln-work in the region itself. The opening performance was also staged purposefully on the first night in 50 years that the summer solstice coincided with a full moon, and the day the sun entered Cancer: June 20; a Strawberry Moon that the inauguration of Putiferio marked with a feast of village pies and grilled meat. 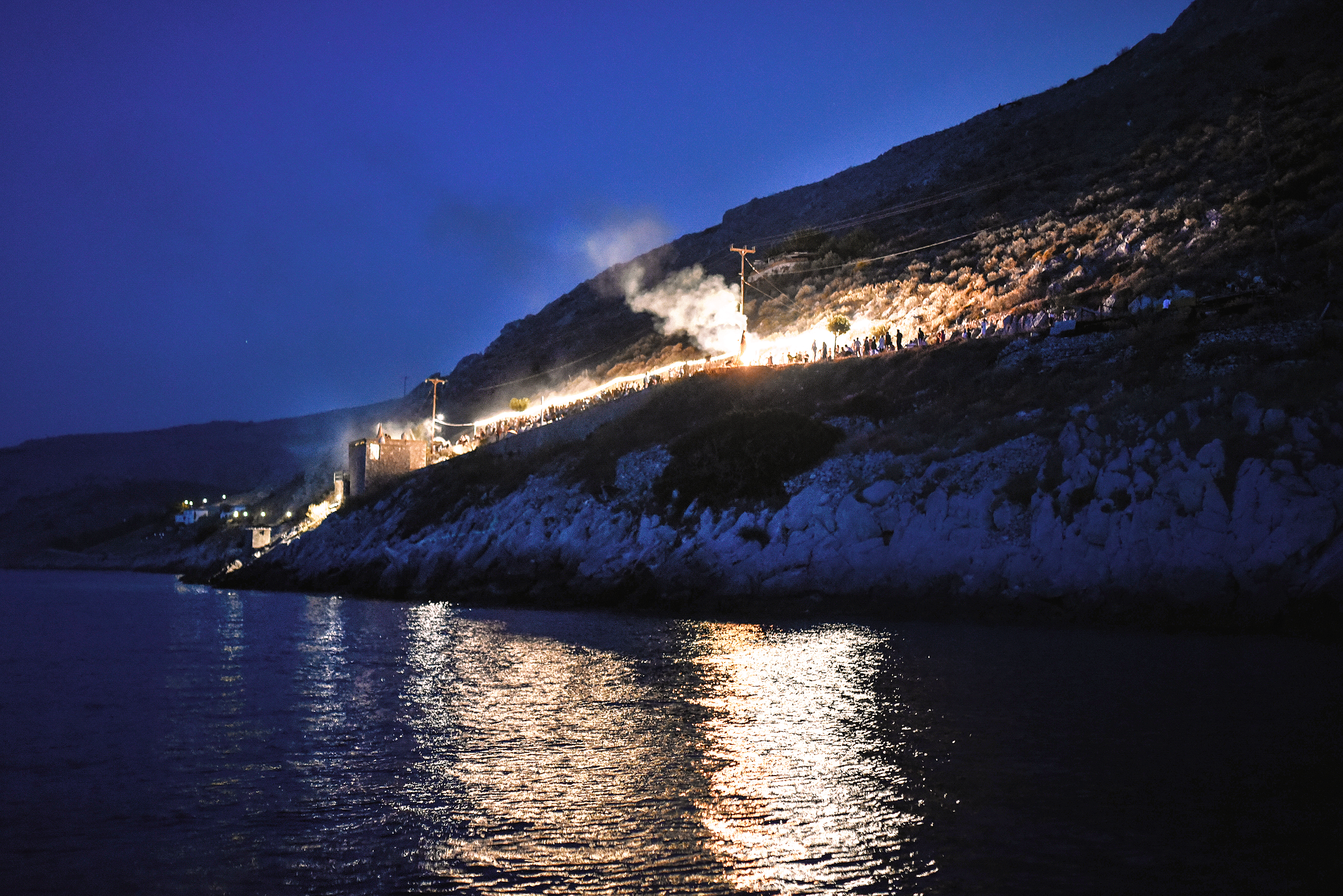 The pastoral undertones of Cuoghi’s Slaughterhouse offering were echoed throughout the Greek summer season, from the project space Dio Horia on Mykonos, where a group exhibition curated by Rallou Panagiotou was coupled with solo exhibitions of paintings by Panos Papadopoulos and Cacao Rocks, to the beautiful solo show at the Cultural Foundation of Tinos of work by Vlassis Caniaris, sensitively curated by Christopher Marinos. 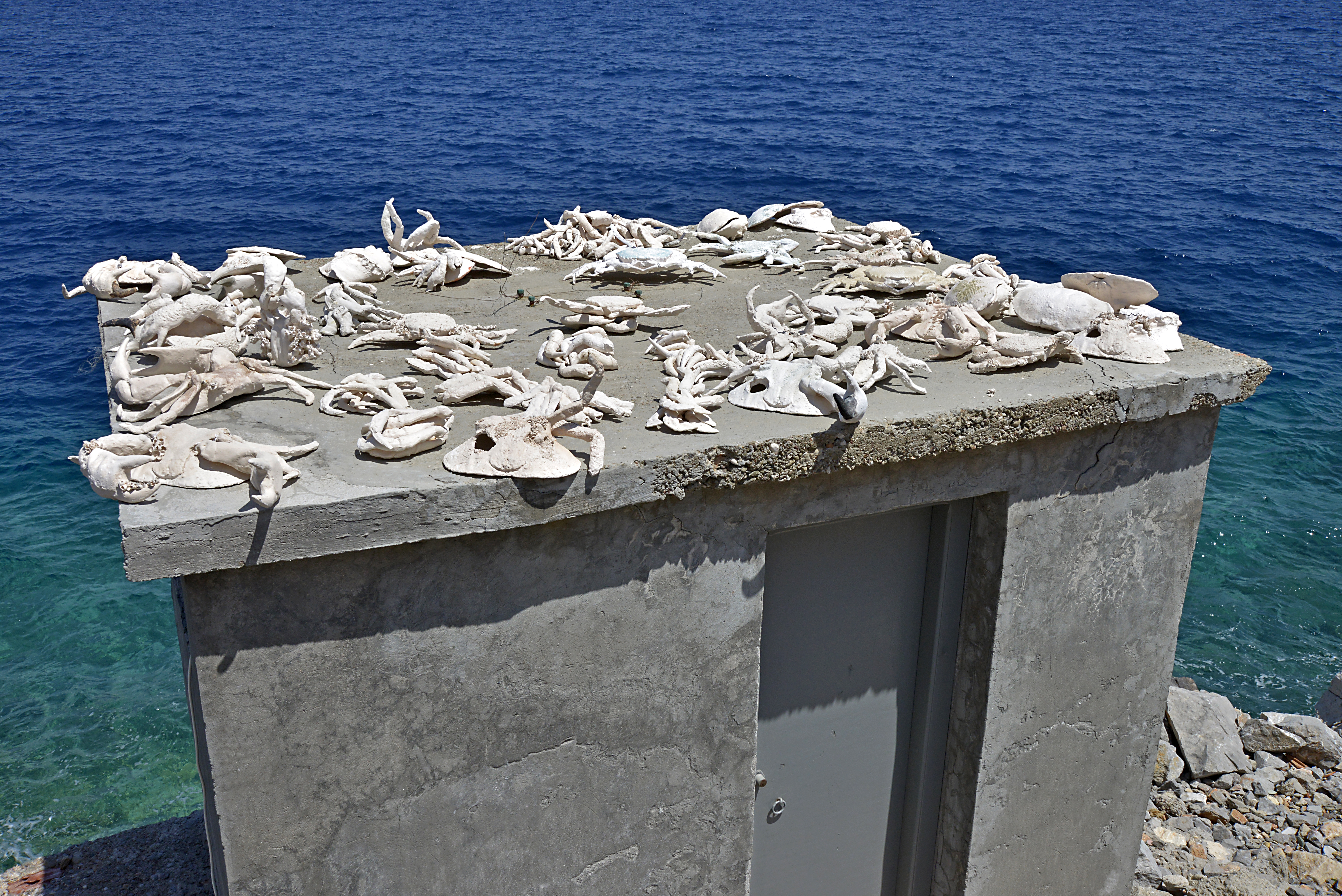 My trip ended in the mountains, with another pastoral performance at the Temenos, an outdoor screening located in a field near the Arcadian village of Lyssareia. This is where, since 2004, filmmaker Robert Beavers has been showing Eniaios, the final work of Greek-American avant-garde filmmaker and co-founder of the ‘New American Cinema Movement’ Gregory Markopoulos. Eniaios is an 80-hour silent 16mm film broken into 22 cycles and was conceived between 1948 and 1990. As the story goes, Beaver and Markopoulos came to Arcadia in 1980s, after leaving the US for Europe in 1967, during which Markopoulos worked on Eniaios, and where he insisted it be shown. The move out of the US was a considered reaction: Markopoulos was abandoning the experimental film scene, even removing his work from distribution. (He also requested a chapter on his work be removed from the 1979 edition of P. Adams Sitney’s publication on American cinema, Visionary Film.). The showing this year marked the fourth cycle of Eniaios, which translates to both ‘unity’ and ‘uniqueness’ during which visitors would sit under the Arcadian sky from 10pm to 1am watching a flickering Morse code of film edits.

When I’ve asked people in the past who have been to Temenos what it’s like—which is the majority of the Greek art scene at one point in their lives, it seems—they almost always say: ‘it’s amazing’, their voice trailing off as far as their gaze. With experience, as Markopoulos seemed to have intended it, I understand why. The point of Eniaios is being there over the three days in order to roam Arcadia by day, and experience the flickering screen of Eniaios by night. It is an opportunity to see through the eyes of the man who wanted us all to be there in a region defined by the mountains, rivers, and coastline that delineate it—the realm of Pan, the temple of Apollo Epicurius and the river Neda, but also a central site in the resistance against Turkish occupation, and where Markopoulos staged his own rebellion. The beauty of this decision becomes clear when one enters the landscape: Arcadia, a place as evocative—and universal—as Cavafy’s Ithaka. An ideal like the classical image of Greece as symbolised by the Parthenon, appropriated as it was in recent times to represent the core values of western civilisation, or even the dystopian afterimage the country has since offered when it comes to the deeper malaise currently afflicting the European Union. 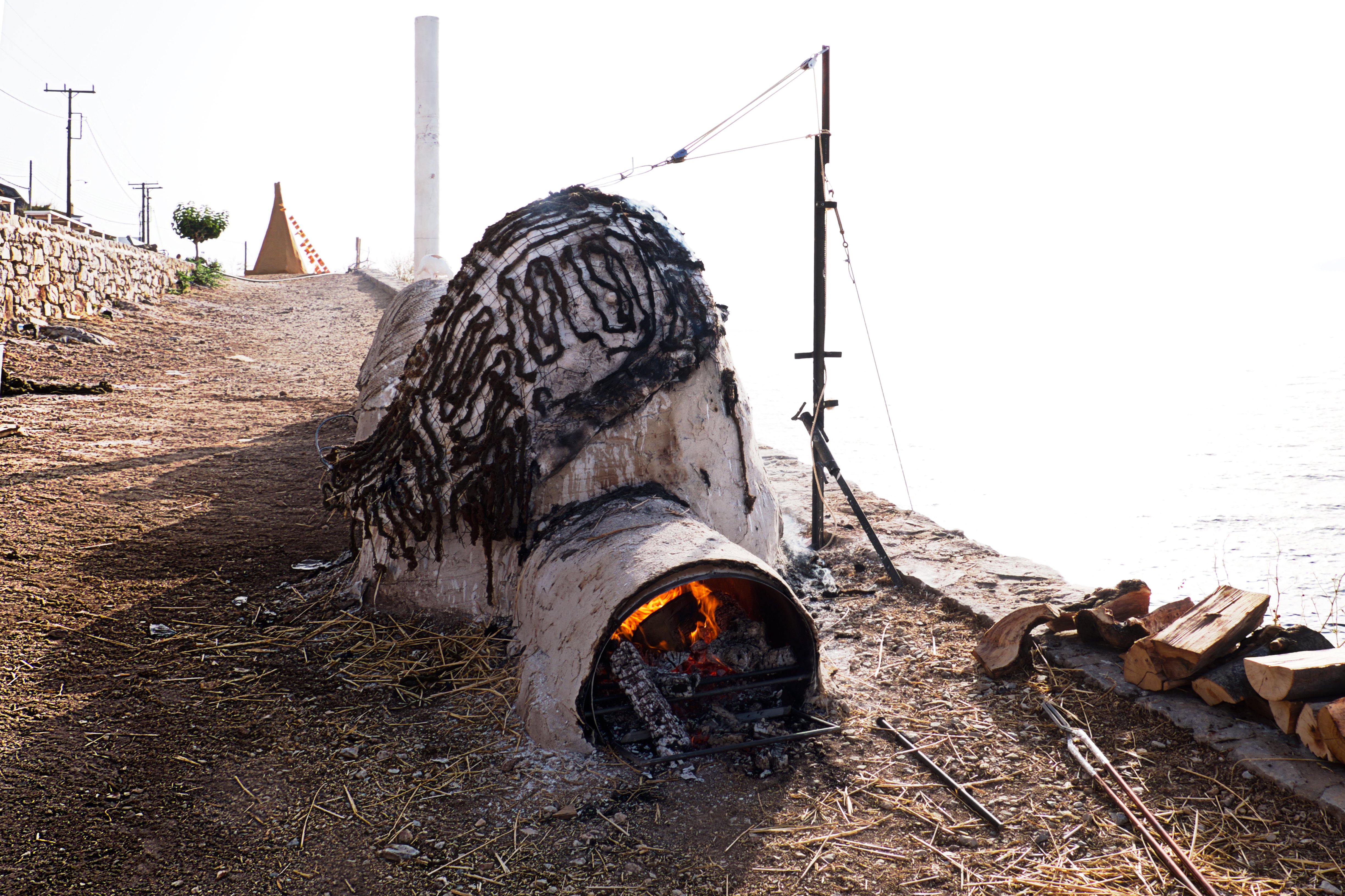 Visting Temenos was a fitting way to leave Greece. Days earlier, I’d read a Guardian article damning the Stavros Niarchos Cultural Center for its grandeur, questioning whether or not the state would be able to support such a thing (even though the foundation clearly stated in a recent press conference that it would be on hand in assisting the state in supporting the centre until it could run on its own). You might say that the text—as valid as its points are—discounts the fact that there are real efforts being made in how things move forward from here, despite the way in which crisis has come to effect society at every level, and even if these efforts are seemingly minimal. (The continuation of a visionary filmmakers’ modus operandi, for instance, or the launch of a cultural centre like the SNCC, conceived pre-crisis, in the boom times, for better or for worse.)

Indeed, just as the experience of Temenos is not complete without hearing the sound of the projector wind down, seeing the screen go black, feeling the bite of the mosquitos at your ankles, and hearing Robert Beavers shout ‘reel change’ through the darkness, so the experience of Greece is not had without hope, or formal conviction, to balance things out. No matter how bad the odds, no matter how bleak the future. —[O]

Sotheby's, meanwhile, announced that a 'quintessential' painting by Piet Mondrian would lead their Modern Evening Auction.