Designed as an 'anarchist laboratory of the revolution-to-come', Floraphilia. Revolution of plants at Temporary Gallery. Centre for Contemporary Art in Cologne (7 March–20 September 2020) frees plants from the pages of design magazines and Instagram timelines to look at them as agents of revolutionary activity.

Artificial pink and purple hues fill the first gallery, where a plant-covered table forms part of Hungarian filmmaker duo Igor and Ivan Buharov's installation, Eternal Intentionfield Tuning (2018). These plants are intercepted with objects including an obsidian mirror and telephone, suggesting an invisible communication network. In ten meditative, surrealistic films shown on small television sets and projected on walls around the room, men and women walk through fields, forests, and bodies of algae-filled water, communing with plants and caressing trees.

Nature's recalibration as a guiding presence feeds into Ruth Ewan's project Another Time (2016–2019), which draws from Swedish taxonomist Carl Linnaeus' hypothesis for a garden plan formed of flowers that open and close at different times of the day. In her 'floral clock', Ewan invited the local community in Cambridge to plant over 5 million seeds in a field next to Cambridge University's Gravel Hill Farm workers' cottages. Instead of replicating the numbers on a clock, the seeds were spread across the field, proposing a new reading of time that is 'stretchy, unpredictable, open, pulsating'.

Ritualistic themes continue in the small, earth-toned second gallery, where Bianka Rolando's giant garland of dried goldenrod, Solidare (2019), takes up most of the space. Used as a traditional herbal medicine to help heal wounds, goldenrod was named solidago by Ancient Romans for these unifying properties. Cut by farmers and harvested by Rolando, the plant is cast in a new, non-hierarchical light that emphasises community and togetherness—values that are reflected in a poem woven through the branches. 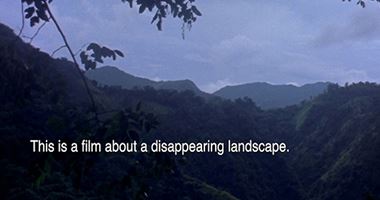 Nearby, a video projection by Beatriz Santiago Muñoz, La cabeza mató todos (2016), which translates to 'the head that killed everyone', reinterprets the shooting star in Puerto Rican mythology, where it has been defined as a head without a body that signals the arrival of destruction and chaos as it passes through the sky. In the video, we see artist Michelle Nonó, a botanist and cultural activist, dancing as a narrator poetically evokes different mythological elements.

Split between the third and final room are two etchings by Candice Lin: Five Etchings (Book) and Five Etchings (Etching) (2015) that reinterpret Lynn Margulis' endosymbiosis theory, which posits that the formation of a new organism can arise through two or more free-living organisms. A contemporary understanding of biological life disregards this theory, and during Margulis' time she was ridiculed. Still, American ecologist Robert Whittaker admitted that Margulis' theory was key to his formulation of a five-kingdom system of classification that includes bacteria and single-celled organisms.

Lin also presents a book that reinterprets Margulis' theory through drawings referencing alchemical processes, shown on one of eight tables in the final room, which is staged to resemble a laboratory. White cloth-covered tables present items and reading materials inviting engagement, such as Dagna Jakubowska's Weeds (part of 'The Edible Map of Migration' series, 2019), which presents plants and weeds sourced from invisible 'peripheral' spaces that she has cured, dried, and arranged in glass receptacles.

As Floraphilia suggests, plants can offer more than mere decoration, and there is much to learn from their political and politicised histories. Milena Bonilla's Spring starts as a murmur (Utopia) (2019) reflects on the legacy of Polish writer and activist Rosa Luxemburg, whose passion for collecting plants extended to her time in prison. Seeds of flowers from Luxemburg's herbarium are organised in clusters on a table, connected with pieces of string and accompanied by poetic reflections on the political meaning of each plant.

In Saddie Choua's installation, Take care of yourself and join the revolution (2019), nature's healing properties are likewise rendered a site of resistance. Comprising texts about healing plants arranged on a lamp-lit table, reflects on the psycho-physical trauma caused by racism, the project departs from a book consisting of plant classifications written by botanist and doctor Rembert Dodoens—a method that Choua connects with the devastating effects of racial categorisations.

It is this legibility that runs through Floraphilia—an exhibition that highlights the depths of knowledge that plants hold for the present. A plant guide, also presented in PDF format as part of the exhibition's online staging, outlines the surprising origins and properties of various decorative plants presented throughout the show. The dwarf umbrella tree, for instance, a popular houseplant that originates in Taiwan, is in fact highly poisonous, as is the flower of the Christmas rose, which was used by women in the middle ages for abortions. What I often seen as decorative is revealed to be powerful and complex.—[O]