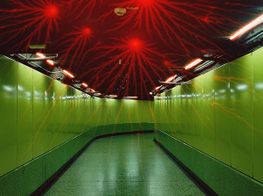 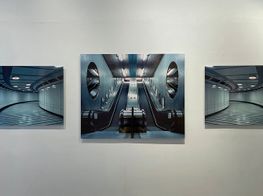 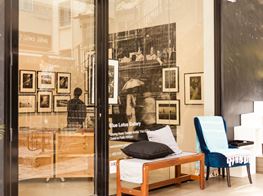 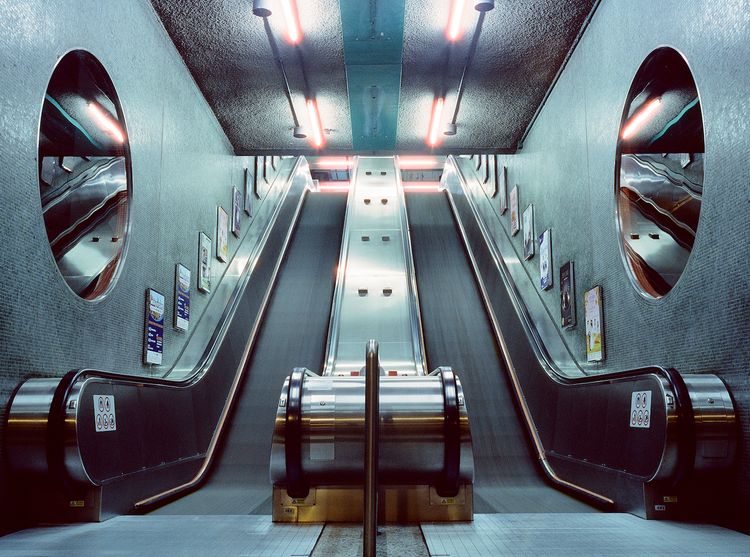 Though the intention was to brighten up the subterranean network, a sizeable portion of the Hong Kong population were illiterate at the time of the MTR's design and construction in the 1970s, free education having only been introduced in 1971, and vibrant hues helped identify each station.

Some colour choices were based on function, like the bright red signalling interchange hubs such as Central, and terminuses like Tsuen Wan, while others played on place names: multicolours for Choi Hung, meaning rainbow; lychee pink for Lai Chi Kok; and the colour of wet, compacted sand for Cheung Sha Wan, or Long Sand Bay. 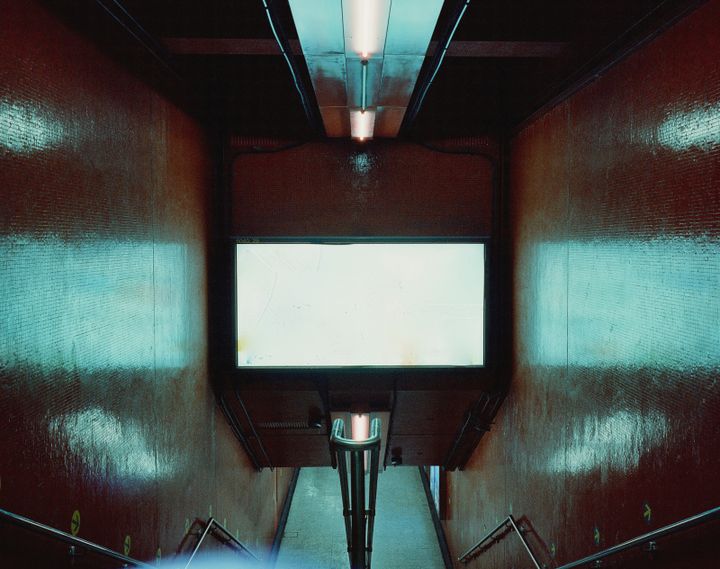 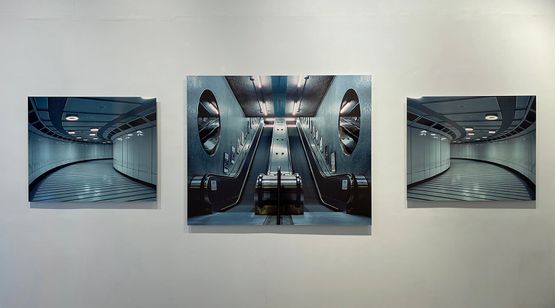 At Blue Lotus Gallery, photographer Christopher Button has taken advantage of this underground palate and elevated its urban modernist spaces into readymade geometries isolated in the frames of Mamiya 7ii and CineStill 800T medium-format cameras.

The exhibition (9 September–10 October 2021), aptly titled Labyrinth after Jorge Luis Borges' poem of the same name, brims with saturated prints and dramatic angles. The Labyrinth #4 looks down a clean, red stairwell of Central divided by a handrail, an over-exposed, white advertising screen bathing the scene in a cinematic, electric blue. 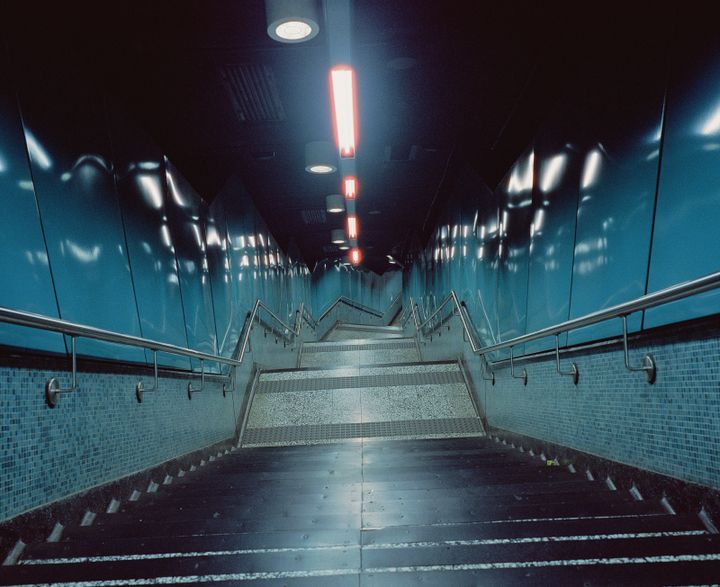 The Labyrinth #6 offers more textures in a formally active frame that pans down a much longer flight of aqua terrazzo stairs in Quarry Bay lined with black rubber safety edges on each step that match the blackened ceiling.

Silver handrails zigzag down either side of the descent towards an off-centre vanishing point, cutting a line between blue tiling on the wall below and the smooth, shiny blue surface above. 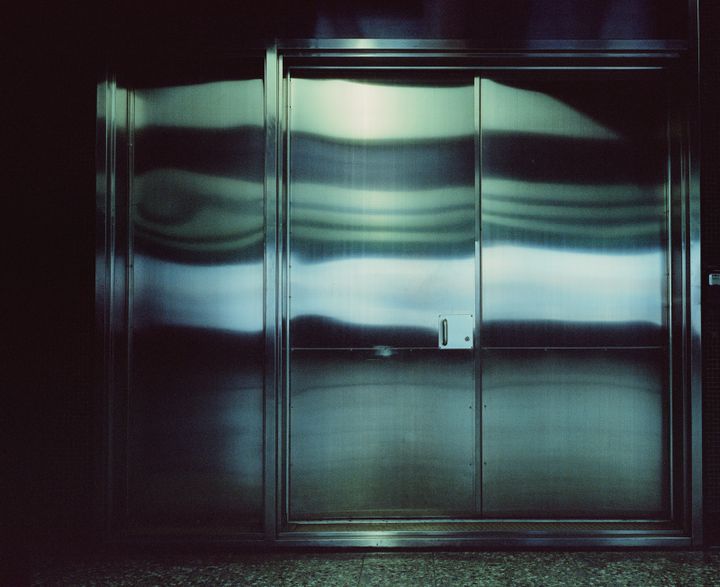 The stations in Button's work are always empty. He photographs them late at night, when the characteristic crowds of roughly five million that use the MTR in a day are no more.

Button cites the influence of Stanley Kubrick—namely, the filmmaker's symmetry and one-point perspective and its ability to heighten the drama of even the stillest of spaces. 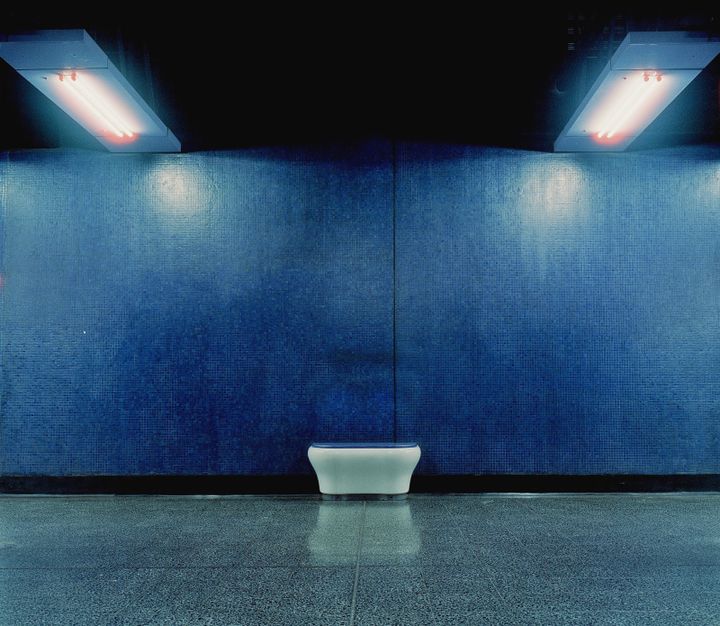 Button elaborates on this Kubrickian referencing in relation to one of the most dramatic pictures of the series, The Labyrinth #40: a double escalator in Chai Wan station viewed from below shot with an f22 aperture—whose wide depth of field brings all elements into sharp focus—over two seconds to smooth the escalators into flat, black strips.

There is so much poetry infused in this subterranean network, saturated not only with the colours that connect to the land through which it cuts, but with histories, big and small, personal and profound, fleeting and unforgettable.

And yet those night-lit, analogue textures also bring to mind the charged, frenetic yet romantic view of the city through the eyes of Christopher Doyle, the cinematographer behind some of Wong Kar Wai's most iconic films. 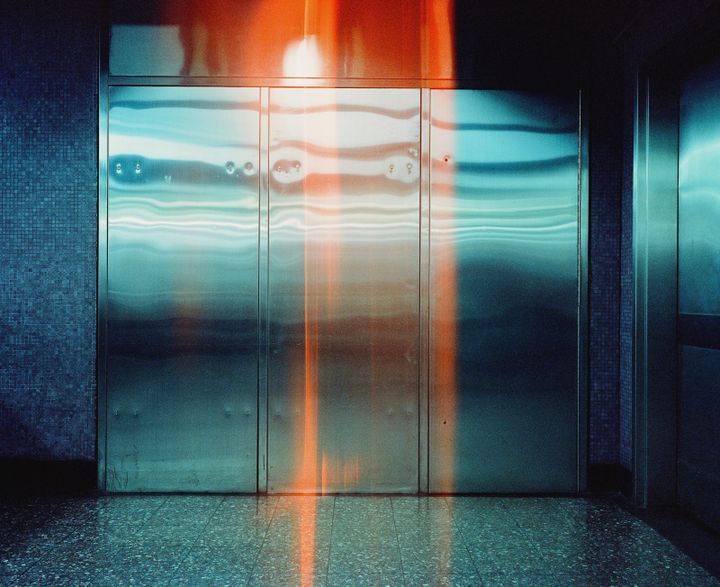 Take the sharp, grey stairwell of Causeway Bay in The Labyrinth #25 viewed upwards from a landing below, softened somehow by those ubiquitous silver tube lights that paradoxically glow warm—a golden glitch that sweeps down The Labyrinth #29's focus on a metallic door, also in Causeway Bay.

You could imagine Brigitte Lin's iconic 'Woman in Blonde Wig' character from Chungking Express (1994) stumbling down each step one tumultuous night, a hand stroking the tiles for comfort, trailed by the thick, humid air and tapestries of ambient, urban noise of the world above. 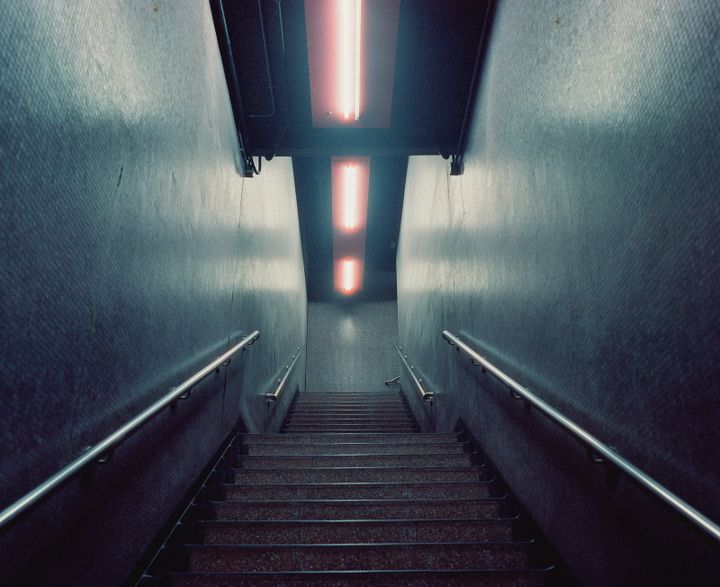 Of course, such off-kilter romance is but an indulgent escape these days, when thinking about the scenes that Hong Kong has witnessed in these stations more recently. Like that unforgettable summer's night in 2019 amid the city's intensifying political demonstrations, when 100 men in white T-shirts stormed Yuen Long MTR station and beat young protestors, journalists, and unfortunate bystanders, injuring 45.

These stations have seen so much, which is unsurprising in a city that relies on its matrix to move and stay connected: a lifeline that spreads through the territory like veins.

Besides, that tactility of the MTR's tiles has been replaced in newer stations for smooth, shiny surfaces, as captured in Labyrinth #12 and #13, a diptych that charts a bright, white roundabout in Causeway Bay—an image that speaks to that ominous Kubrickian sense of a future hurtling at you from behind a corner.

Of course, some iconic stations conflate the shiny new with the tiled old, as in The Labyrinth #26 and #27, a diptych showing the purple corridors of Causeway Bay, the lower half of the walls clad in that classic, coloured inlay—a midway point between Hong Kong's past and present. 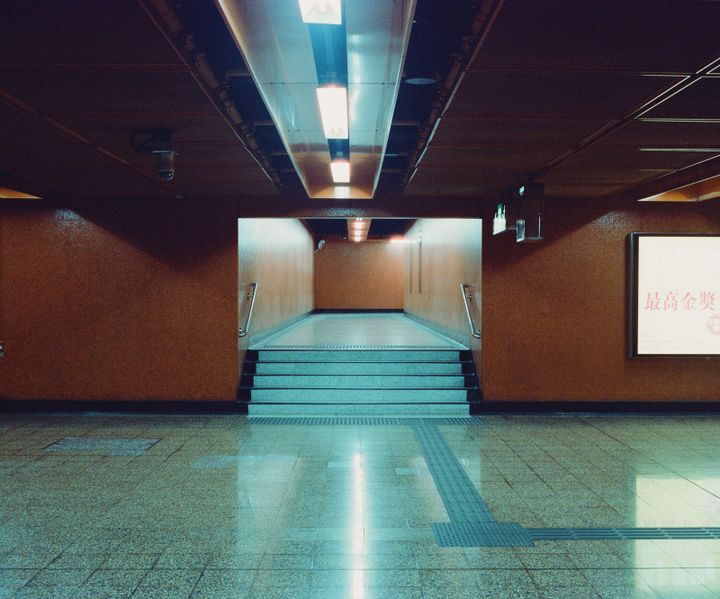 No wonder Button's turning these pictures into a book. There is so much poetry infused in this subterranean network, saturated not only with the colours that connect to the land through which it cuts, but with histories, big and small, personal and profound, fleeting and unforgettable.—[O]

Christopher Button is an artist and photographer, living and working in Hong Kong. His inspirations are drawn from the city and cinema, particularly the films of Lynch, Kubrick and Tarkovsky. His quiet yet cinematic images look to explore the inner

Located on the quiet historic Pound Lane in Sheung Wan, Hong Kong, Blue Lotus Gallery specialises in contemporary photography with a focus on exploring the culture and identity of Hong Kong. Established in 2007 by Belgium-born gallerist Sarah

Around 5 million people ride on Hong Kong's underground network every day. Yet, to most of us this journey is nothing more than a ride to work, a means to get from A to B, a place packed with people scurrying about mindlessly. The stations are but