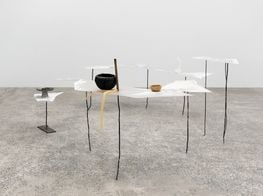 At West Bund Museum, Shanghai, Hu Xiaoyuan's exhibition Paths in the Sand (11 November 2022–26 February 2023) offers a series of overlapping, shadowy, and winding paths. As viewers wander through the gallery, draped with translucent grey and beige curtains, they encounter metaphors about temporality and the state of living that open up new perspectives.

The installation Trodden Beaten Paths in the High Moor (2022) is near the exhibition entrance. Made of recycled rebar, it partly resembles the form of an octopus, with a head, a body, and tentacles. The rebar twists and winds like charcoal lines on a page, connecting circular and square shapes reminiscent of cartographic rivers and fields.

As our eyes roam from the centre of Trodden Beaten Paths to its extremities through trails directed by the rebar, we discover found objects such as a discarded metal frame, fly whisk, dustpan, screwdriver, shaving brush, shovel, raw silk, and snake shed. 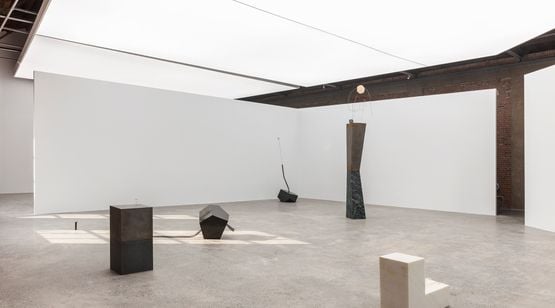 'He believed...in a dizzily growing, ever spreading network of diverging, converging and parallel times. This web of time—the strands of which approach one another, bifurcate, intersect or ignore each other through the centuries—embraces every possibility,' wrote Ultraist Argentinean writer Jorge Luis Borges in his short story The Garden of Forking Paths (1941).

Borges had a particular talent for constructing metaphors for intangible elements such as time and probability; in The Garden of Forking Paths, he describes time as a labyrinth in which 'no one could not get lost'. Trodden Beaten Paths in the High Moor functions as a similar metaphor. It foreshadows the exhibition as a web through which we are bounced, retraced, and offered a vision of alternative paths. The paths do not dissipate when we leave, but extend endlessly into their details.

In Spheres of Doubt｜Farewell, Forever VI (2022), three lengths of rebar pass through a continuous sheet of aluminium and support it as legs prepared for any momentary rising. The aluminium sheet, which serpentines across, recalls a Möbius ring. Scratches appear on the metal ring, suggesting the harnessing of a great force to shape it. The encasement makes the work seem like a maze leading towards itself.

Scattered on the aluminium ring of Spheres of Doubt are wrapped objects that morphologically resemble crawling sea cucumbers. These objects are organic—fossilised palaeontological faeces, coral stones, myrrh, and renzhonghuang (a liquorice-based Chinese medicinal material—and covered in raw silk or gauze. 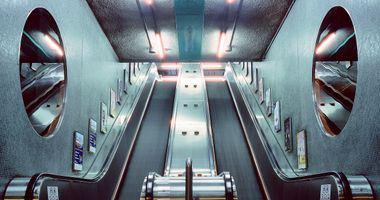 In Spheres of Doubt, Hu uses her signature method of wrapping raw silk around organic matter then applying ink to the surface to offer a shadow of the original forms of the objects within. As time passes, the interior organic matter slowly deforms and dissipates. The cavities that are left behind materialise questions of reality and mortality.

Taking the form of a labyrinth or Möbius ring, Hu's work explores the entanglement of time. The pendant forms wrapped in silk imply different temporalities through their decay; time is wrapped in time, and paths are bred by paths, as if such a perspective could offer a static, omniscient view of the universe. At the same time, change itself is a constant—a Möbius ring with no beginning or end.

Another form of temporality in this exhibition appears in the 'Paths in the Sand' series (2021–2022), in which time seems to have stopped long ago. Several palm-sized wooden blocks are evenly coated with gesso, and each depicts a portion of a tower and a monument in pencil and watercolour. The same shapes appear in the monolithic figures of A Day in Heaven (2021). The surfaces are painted with flat brushstrokes and thin layers, recalling the paintings of Agnes Martin.

All the once-magnificent statues, monuments, towers, and monoliths of A Day in Heaven and 'Paths in the Sand' are depicted floating in front of a void white background. The structures are collapsed, as if they have been washed, sunburnt, plundered, and abandoned. All that remains is the wreckage, clean and still like nothing ever happened.

A bench, as if for travellers to rest on a forking path, is tilted in A Winding Path to Nowhere I (2022). One side is sunk to the ground; the other is rickety and stacked with cubes made of wood and wire and wrapped in stainless steel mesh and wood veneer. A square wooden box is at the bottom of the stack; it holds crystals and honeycomb on the edge of falling out—a witness to and relic of the existence of life.

The collapsed form on one side of the bench appears to have sunken halfway into the water, and the texture on the bench surface resembles water stains and ripples. Although there is no water on site, the impression of sinking is imprinted, through which the crumbling of the other side becomes undeniable.

In Dear ____ (2022) and A Winding Path to Nowhere III (2022), materials of various tones and textures are connected end-to-end. Each material overlaps at its joint; although these joints are extraordinarily delicate, they sustain morphological extensions hundreds of times longer than the conjunctions.

It is through the joints that forces are able to burst out from each material transformation. Likewise, every installation is connected, overlapping in material and concept. The confluences uncover a pathos that stretches endlessly in waves of silence and pain.

Each work responds to concepts of temporality in the form of paths and passages.

A Winding Path to Nowhere II (2022) is a serpentine channel in which stainless steel mesh wraps around steel wire like skins over bones, but not without a dilemma: the skin tries to break free from the shackles of the bones and the bones try to break through the confinement of the skin. In this internecine revolt, the sculpture settles its shape.

A ball of wires located inside the cavity of the channel of A Winding Path, thin as hair and wrapped in raw silk, resembles an unhatched egg, alluding to an ambivalent pathos that appears through the forbearance, ferocity, and evanescence that pulsate under the calm rhythm of everyday life. 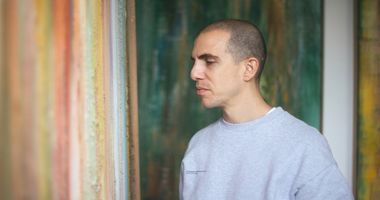 The video Here I Begin at the End (2022) elaborates on this condition. A bee, blurred at first, wobbles between the faculae and shadows behind the gauze. Several bees, working, move in and out of a plastic hollow. More bees appear, buzzing, huddling, crawling over larvae and climbing on top of each other. Between these images comes other footage, of bushes, insects, breast milk, fog, and water. At the end of the video, water jets fiercely conjoin, spray, rotate, and land.

Throughout the exhibition, abstract forms are attached to ready-made objects, triggering dialogues between abstraction and figuration, and the light and the heavy. The juxtaposition of materials rejects definitive categorisation and creates scenes suspended between reality and fantasy. The installations also often employ porous or tubular structures, as in Dear ____ and A Winding Path to Nowhere III, while the water column in the video performs as an extension of such structures in motion.

In other works, there is a common use of opposites and material gradations. For example, a counterbalance lies between the single fibreglass stick and the aluminium plate in Spheres of Doubt | Farewell, Forever VII (2022), the competing decomposition of bread and stone in A Day in Heaven, and the gradual transformation of material in Dear ____.

Each work responds to concepts of temporality in the form of paths and passages. They are stoic while at the same time revealing a sense of uncontainable pain. The connections between works sometimes entangles and other times separates, similar to how rivers furcate and converge. The relationship between each installation and its subject matters remains shrouded until they wind together.

Trodden Beaten Paths in the High Moor is the exhibition's table of contents, Here I Begin at the End its summary. The directorial function of the former is morphologically enunciated, while the latter provides a strong emotional thread, echoing the materials and themes in other works, most notably the interpretation of life and the honeycomb in A Winding Path to Nowhere I.

The journey of Paths in the Sand is an allegory for life. In it, Hu offers a self-portrait matching the journey of metamorphosis that cicadas and snakes make in their moulting. However, in her works these organisms, although violently torn and pulled, are wrapped in veils and overlaid with shadows. They morph into a ghostly breath, permeating the world with every exhale. —[O]