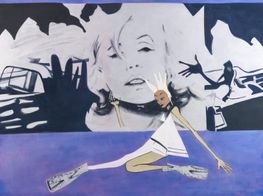 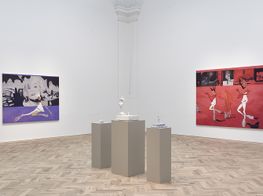 Referring to her representations as compilations of the subconscious, Moyna Flannigan's depictions of fictional women aggregate painting with collage and sculpture, drawing from art history, literature, and the imagination.

Born in Kirkcaldy in 1963, Flannigan studied drawing at the Edinburgh College of Art followed by painting at the Yale University School of Art where the focus shifted to a critical analysis of pictorial space.

In Flannigan's work, space shares prominence with the figure, as seen in early oil on canvas paintings Isobel (1998) and Just like Daddy (1998). Realistic portraits of fictional characters are rendered against clouded cyans and dark purples—backdrops that evoke the moody expansiveness of the Scottish shores.

The vastness of Flannigan's native landscapes extends to later works like the oil on linen Three Eves (2014). Referencing both the biblical figure Eve and the mythological three graces, a barren earth takes up over three-thirds of the canvas, enveloping a trio of women in a blend of burnt brown and bright orange.

Two figures are depicted at vanishing point, skeletal legs spread wide, while the third is painted at sightline with arched back and translucent skin, angular breasts pointing upwards. 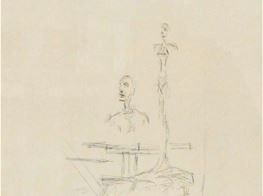 Flannigan has talked about the form of Femme égorgée 'feeding into her subconscious',1 prompting the artist to begin her own physical alterations of the figure to confront the violence of the female body's objectification.

The artist began incorporating collage into her process around 2016, tearing and cutting up her own drawings to create unexpected portraits directed by chance, so that a hand or a tree in one image may very well become an arm or a leg in the next.

The construction of these images turns female representations into expansive aggregations of recollections and associations, whether personal or historical, set against equally expansive planes. 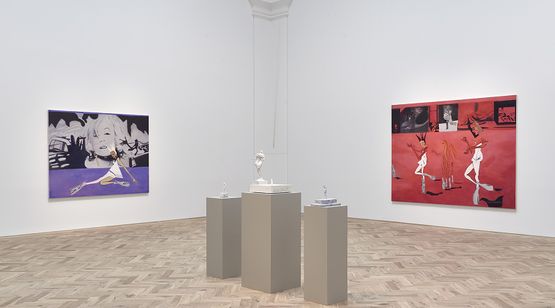 'Arranging fragments feels alive and connects to unexpected ways one finds objects in nature,' Flannigan tells Ocula Magazine, which connects to Flannigan's time in residency at The British School in Rome, a historical tabula rasa filled with what she called 'unexpected fragments'. The process seems to help the artist adapt and regenerate images as memories and impressions change with time.

For Matter, showing at Ingleby in Edinburgh (2 October–18 December 2021), the artist creates a point of focus and refraction in the year 1963, when she was born, locating bodies within time's tapestry.

'Many things that interest me are made around, or relate to 1963,' Flannigan reflects. The artist cites Gloria Steinem's article exposing the world of the Playboy bunny clubs, Martin Luther King's 'I have a dream' speech, and Valentina Tereshkova becoming the first woman in space aboard the Vostok 6.

Iconic images from the era appear in new paintings, grounded in motifs of female allure that bear the weight of sexualised caricatures. Marilyn Monroe's face is painted against a purple backdrop, a layer of black filament wrapped around her throat, in the distemper on canvas Past/Present (2021). In the foreground, a cutout woman with a triangular torso lounges on the ground, wearing white rabbit-like ears and heels cast in cement.

Flannigan has taken to blending her own pigments and binders to return to an earlier point in painting, a transition prompted by Piero della Francesca's The Madonna del Parto (1460), a 15th-century fresco depicting the Virgin Mary pregnant between parted curtains, which Flannigan travelled to see from Rome.

But while historical materials are recovered in these new works, ideas progress forward. In Reel Time Woman (2021), made from ink, gouache, and collage on canvas, five partial female figures are scattered against a scarlet backdrop.

Referencing Tereshkova's cosmic excursion, the upper half of the canvas is lined with two black and white pictures—an aircraft hovering by the moon, and a hand gripping a high heel. The women fade progressively into the background, the last rendered as a pair of cement heels.

At Ingleby, Flannigan's material reflection on the female form is extended through the inclusion of plaster and bronze sculptures—aggregated bodies extracted from the canvas and cast into matter.

Among them is Twister Sister (2012), made up of moulded body parts over an armature. While the work was created in 2012, this is the first time it is being exhibited, demonstrating an approach to cumulative processes that pre-empts her collages but is not unrelated to them.

'The sculptures are related to the collages, and the collages respond the sculptures. They are assembled from humble materials, and have undergone lots of manipulation', Flannigan states. 'I hope they embody a sense that fragility and strength, vulnerability and power in the same thing and at the same time.' —[O]

Moyna Flannigan’s new paintings and collages draw upon imagery from art history, mythology, and popular culture to explore modern society and, in particular, the representation of women in art. The figures she portrays are an amalgam of memories, 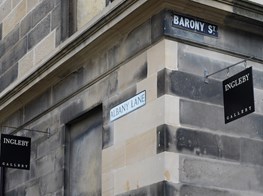 Founded in 1998, Ingleby maintains an ambitious program of exhibitions and off-site projects by established and emerging artists. Over the past 14 years, it has secured a reputation as one of the country’s leading private galleries, renowned

Moyna Flannigan 's paintings of figures, always women, are an amalgam of memories, experiences and ideas, drawn from history, mythology and popular culture. Their identity or essence remains ambiguous, as if they were passing through, or suspended

Alberto Giacometti was a Swiss sculptor, painter, draughtsman, and printmaker. His distinctive style and close alignment with the significant art historical and philosophical movements of the time made him one of the most important sculptors of the 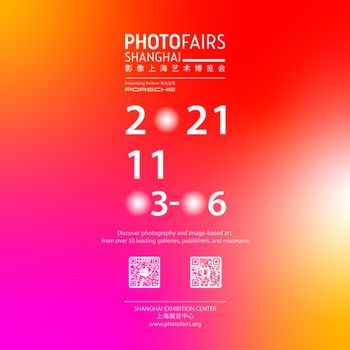