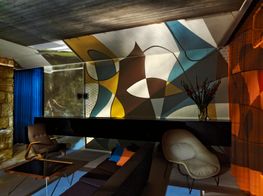 In her new exhibition at Stills Gallery in Sydney, acclaimed photographer Robyn Stacey continues her exploration of the camera obscura technique, this time offering a rare glimpse into the working havens of artists—those otherwise mysterious spaces from which inspiration seems to miraculously emerge. Notable artist studios and residences provide the sites for this new series, which features Rose Seidler House in Sydney, built by architect Harry Seidler, Hans Heysen’s painting studio in Adelaide, Wendy Whiteley’s home at Lavender Bay and Yvonne and Arthur Boyd’s residence at Bundanon.

Firstly, please explain the process of camera obscura and some of the challenges involved in using this technique?

'Camera obscura' is Latin for 'dark room', the name given to the phenomenon whereby an image of the surrounding world is projected onto a screen or wall in a darkened room. Like pinhole photography, the camera obscura allows light in through a tiny hole in order to project a scene from outside onto an inside surface. Newton’s law that light travels in a straight line is ably demonstrated by the camera obscura as it creates an upside-down and reversed image in the room, the sky and clouds cover the floor and buildings, roads, trees and parks are inverted and suspended from the ceiling.

The Camera Obscura is totally weather dependent and will not work on an overcast or cloudy day. On a bright sunny day, the projection of the external vista into the room only exists for a few hours, depending as it does on the position of the sun in relation to the room. Rooms are either morning or afternoon rooms and everything happens in real time so there is very little that you can plan beforehand. You have to respond to the transience of the process which is quite exciting.

How did you become interested in camera obscura? I understand you first employed it as part of your 2013 residency at the Sofitel on Collins in Melbourne the result of which was the Guest Relations series?

One of the conditions of the residency at the Sofitel on Collins requires artists to make work about the hotel. The Sofitel is situated on one of the few hills in Melbourne and is known for its 360 degree views over the city. The views were panoramic resulting in a postcard style image but I thought if I could bring the view into the room that would be more interesting. This made me think of turning the room into a camera obscura and literally wallpapering the rooms with the world outside their windows. The upside-down, reversed and distorted visuals of the camera obscura produce surreal and psychological spaces that work really well in the context of the hotel room and the guest. Underlying the hermetic nature of the hotel room, is the awareness of its transient nature, whether it is experienced as a mode of transit between source and destination, or as the constructed world of inward-directed experience, it is a world with a time limit, surrendered to the temporary and ephemeral. The experience of the guest and the function of the hotel room perfectly match the inherent nature of the camera obscura.

What has been the experience for you as an artist in moving away from digital techniques?

I stopped digitally manipulating images before the camera obscura body of work. An analog approach seemed appropriate when I started working with historic natural history collections dating from the seventeenth to nineteenth centuries. The time period that I wanted to investigate and the style of imagery I wanted to make suited an analog way of working, whether it was elaborate still life photographs created from the point of view of the camera or a documentary style recording of the specimen sheets housed in collections here in Australia and in the Netherlands.

Constructing the still life images you control everything from the lighting to the placement of each object in the composition, whereas working with the camera obscura everything is out of your control except for the placement of the hole in the darkened room. Both processes require you to respond to whatever is happening in front of you and problem solve then and there and it’s this immediacy that I really like with an analog process.

The aesthetic of the works is very surreal and dreamlike, encouraging a deeper reflection of the spaces depicted. What is it you hope people will take from the works?

The light in the camera obscura has a unique quality, as the illumination in the room is created from a single shaft of light, which is very different to the way we experience light walking around in the world. I hope the camera obscura makes people think about the act of seeing, which in turn makes you think about the way that vision creates our sense of self. Our vision’s simultaneous enmeshment in and removal from the world, which the camera obscura spectacularly exemplifies, raises age old questions about where do we end and our world begin.

It is a great success of the works that they encourage viewers to truly take the time to see—enjoying new and often surprising perspectives familiar spaces and places. What have been some of the biggest surprises to you in working with the camera obscura technique?

I expected the image in the camera obscura to be upside down and in reverse but I didn’t imagine how much the camera obscura would re-present the world back to the observer. It is also referred to as 'The Magic Mirror of Life' and it is this in-between space that I find so fascinating, you are in the world but removed from it at the same time, and because everything is not as we know it you have to reconsider or re-evaluate the familiar, structures or scenes that you have taken for granted can appear completely different. The quality of light also has a big impact, creating shadowy contemplative spaces, which have an ‘other worldly’ sense.

What are you looking for when choosing locations to photograph?

Usually I decide on a room or a space that I think will be interesting and work with the theme that I am exploring and then it depends on the view from the room whether I go ahead and make a camera obscura.

For the works you are exhibiting at Stills, you turn your attention to the studios and residencies of notable Australian artists. There is something deeply fascinating about the working spaces of artists and other creatives. Your works are particularly interesting as they reveal not only a glimpse into these revered spaces abut also a glimpse of what their occupiers, the artists, saw. Were you thinking about this in making the works?

I made a camera obscura in Hans Heysen’s studio for the Adelaide Biennial and of course what struck me was that the subject matter he is most identified with, gum trees, completely covered his studio walls. Working in other artist spaces I have been surprised by the way that the artist personality permeates the studio space, it’s as if the artist studio or residence works to inscribe the artist's presence, to express his or her artistic identity. Unlike hotel rooms or institutional spaces in the artist studio or residence, many spaces are collapsed into one, it is a working space, a social space and a personal space. The myth of the artist becomes absorbed into the fabric of the building, making them very potent spaces.

Do you have a favourite work in the show and why?

Not really, there are aspects to each image that I find interesting, making it too hard to single out one.

The first half of 2016 has been very productive for you with the Adelaide Biennale and a major solo show at the Museum of Brisbane. What else are you currently working on?

I have become very interested in light and its experiential impact and want to spend time after this show exploring moonlight and see where that leads. —[O]

Robyn Stacey is one of Australia's most acclaimed photographers. Her large and striking images have been exhibited widely in Australia and internationally since the mid 1980s. The early cinematic series, Kiss Kiss Bang Bang (1985), Redline