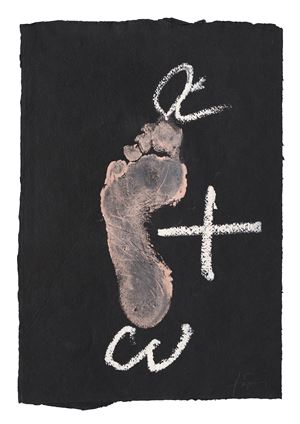 Jannis Kounellis, Arnulf Rainer and Antoni Tàpies all placed the brutality of the material and the energy of the gesture at the heart of their work. Their unique artistic language examines the sacred character of art through the use of profane codes. Tàpies with his exploration of material and the inclusion in this works of signs and objects from daily life, Kounellis by his use of raw materials, and his pared-down and dramatic scenography, and Rainer by his obsessional 'overpaintings' and his ferocious self-portraits.

Jannis Kounellis (1936—2017), who died suddenly two years ago, was one of the major protagonists of Arte Povera, a movement of radical artists that emerged in Italy in the 1960s. His work is exhibited in many major museums in Europe, Asia and America and is a reference for a new generation of artists. In recent years, Kounellis had exhibited many times in Europe-at La Monnaie de Paris in 2016—but also in Russia, Mexico and China, where each time he created spectacular works in situ. The Prada Foundation has dedicated a retrospective to his work, in Venice until 24 November 2019.

Arnulf Rainer, born in Vienna in 1929, was a major protagonist of the Austrian avant-garde movement in the 1950s and 1960s. He is notably famous for covering images, a technique known as Übermalungen. In 2014, the Albertina Museum in Vienna dedicated a vast retrospective to his work and from 27 September 2019, a new exhibition will celebrate the artist's 90th birthday in this museum.

Antoni Tàpies (1923—2012) is one of the major figures of 20th Century art. Over five decades, he created paintings, sculptures, assemblages and more than one thousand engravings and illustrations. Today, his works are exhibited in the world's most prestigious museums (MoMA, Musée d'Art Moderne de la Ville de Paris, Solomon R. Guggenheim Museum...).

Sign up to be notified when new artworks and exhibitions at Galerie Lelong & Co. Paris are added to Ocula.
Sign Up
}