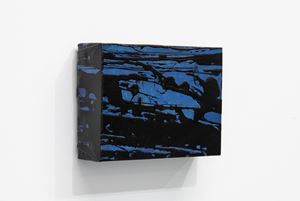 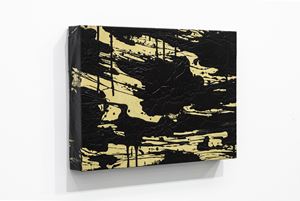 The entire body of work produced by Fabienne Verdier, which for a long time was exaggeratedly considered as being akin to oriental calligraphy, is inspired by the careful observation of natural phenomena: variations in light, the energy of winds, waves and eddies in waterways, the bending of branches, the blaze of lighting, the improbable geometry of clouds. She does not seek to imitate these forms in order to represent them, but to draw on their energy so that, in the peace and quiet of her studio, she can materialise it on the canvases she has prepared for that purpose.

Each of the paintings in this series of small works produced in the days before the year changed so radically, is anything but a miniature painted with a tiny brush and great precision. Instead these are like details, close ups, cut-outs from a movement that goes way beyond their boundaries. The viewer can read in this surge of material the openings, eruptions and flows that reflect their state of mind at the time.

While producing this series of works, Fabienne Verdier was also re-reading That Mighty Sculptor, Time by Marguerite Yourcenar, where the author underlines the ambiguity of that moment where as we enter summer, the days are starting to shorten and without us realising it, winter is already on its way. That is what led her to give the title Solstices to this sequence of great paintings in small formats.

Sign up to be among the first to know when new exhibitions by Fabienne Verdier or at Galerie Lelong & Co. Paris open.