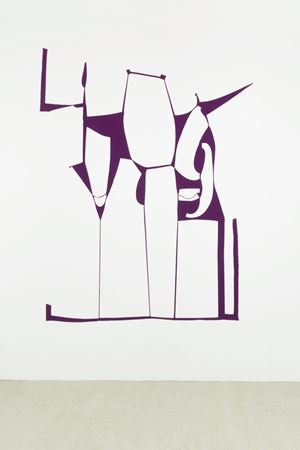 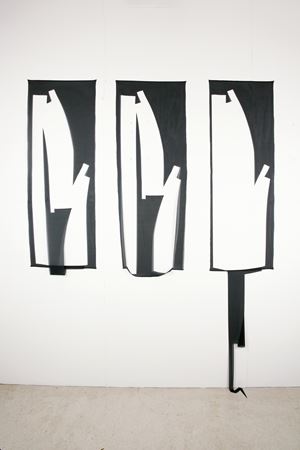 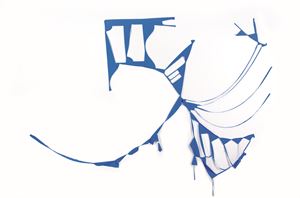 The artist Marion Baruch possesses a special talent: she always lives in the moment and nurtures herself with the present. What sounds like the simplest, most banal thing in the world is, however, an art in itself, which is reflected in more than just the ninety-year-old artist's philosophy of life. Her oeuvre is also permeated by this unique energy. Her long-term body of work speaks with a vital voice that has never shied away from consistently pursuing its own path. Living in the now is not child's play: it requires great strength. Then again, this attitude is also connected to the ability to let go—especially with the sense of ease and weightlessness that is particularly manifested in the latest phase of Baruch's work. It is as if she is constantly renewing the process of creating this multi-layered body of work, as if it were always being 'fetched home into its today,'1 as it says in the poem Homecoming by Paul Celan (1920–1970). She and the Romanian poet also share a common heritage and a love for words.

Marion Baruch was born in 1929 to Hungarian-speaking parents in the Romanian town of Timişoara. As a young woman she began studying art at the Academy of Fine Arts in Bucharest, before she emigrated to Israel. She continued her studies at the Bezalel Academy of Arts and Design in Jerusalem. Thanks to a grant, she was able to go to Rome and study at the Accademia di Belle Arti. She spent time in Paris before finally returning to Italy, where she has lived to this day, with a few sojourns elsewhere. Her nomadic life is reflected in her multilingualism. Besides Italian, Baruch also speaks fluent Romanian, Hungarian, German, French, Hebrew, and English. Even though she regards Hungarian as her native language, she feels at home in many languages. And for this artist, identity is also pluralistic.

This is also true of her art. It seems that, faced with the current situation, Baruch also derives strength from 'nowness' and plurality. The artist's first show at the Galerie Urs Meile explicitly refers to the present time. She responds to the dangers of the pandemic and the limitations imposed to combat it with open-mindedness and positivity. The gallery has purposefully selected newer works that contrast the notion of lockdown and limits with the theme of open spaces, in both the metaphorical as well as the physical sense. The concept of empty space as the basis for artistic and intellectual processes is a central aspect of the artist's work. Since 2013 Baruch has been working with textile remnants from the fashion industry, giving them new life through her work. To do this, she must do nothing on the one hand, and yet create an entirely new world on the other. Through her setup, art is created out of nothingness.

The linguistic form of her works plays an important role in their meaning. Vivid proof of this can be seen in the title of the show, Letting go endless blooming. Here, as in haiku, similar motifs of universal scope are condensed into a compact, linguistic form. 'Letting go' has several layers of meaning for Baruch. First of all, when it comes to her work with fabric, gravity is a 'co-creator' of sorts. As the primary material for her art, fabric is not something that has been assembled or artificially created; it takes on its form through a kind of relaxation. Second, the artist herself must also 'let go' of the notion of the absolute creative spirit. It allows and is allowed—perhaps in the sense of the Gelâzenheit of the mystic Meister Eckhart. Lasciar cadere (Italian for 'to let drop') is also one of the works shown that fits under this rubric, as does the title Traiettorie ('flight paths'). Here, Baruch identifies a movement that creates without doing. Rather, the act of creation is a subconscious process, which, as the title of the show emphasises, is comparable to the blossoming of a flower. Yet, it is precisely this natural process that embodies pure energy and lust for life!

The plant confronts the abstraction of creativity and technology with the immediacy of metamorphosis, the unity of subject and object, of material and imagination, writes the Italian philosopher Emanuele Coccia in his book The Life of Plants.2 That is a statement that applies very well to Marion Baruch's way of working, thinking, and living. For this exhibition, the reference to vegetation is particularly apt, if only due to the colours themselves. One piece is called fiori ('flowers'): across an L-shaped wall stretches a field of flowers, an explosion of small, colourful blossoms whose shape is somewhat reminiscent of ovaries. When one recalls that flowers are nothing more than sex organs, then this association is not entirely inappropriate.

The fact that she is hardly able to work in these difficult times is painful to the artist, but still, she manages to find a way to live in the moment, to allow for emptiness and at the same time, to fill it. The selection of works on display once again shows her ability to break down the limitations of her work, to depart from the given framework. Everywhere, the emptiness of the perforated bits of fabric fringes the space, making them part of it. The works of fabric art are like a transparent membrane engaged in an active exchange with their surroundings: they create a space for dialogue. It is typical of Marion Baruch that she always addresses the viewer with her art. Her art is not hermetic, but always open to dialogue with fellow humans. Through this, the artist teaches us without being didactic—a lesson that we ought to take to heart these days, in particular.

Sign up to be among the first to know when new exhibitions by Marion Baruch or at Galerie Urs Meile open.