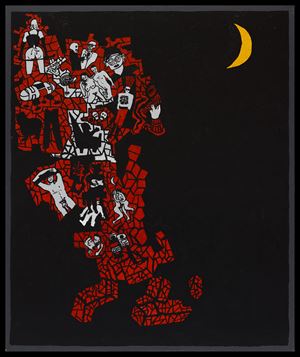 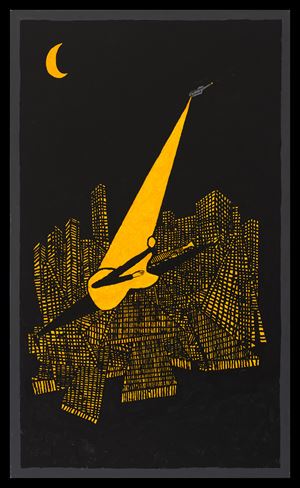 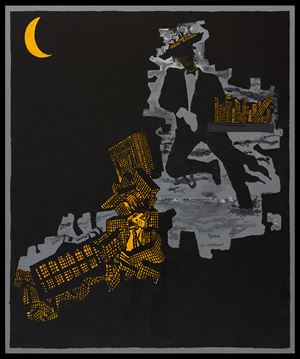 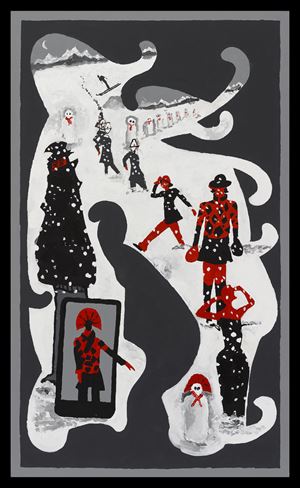 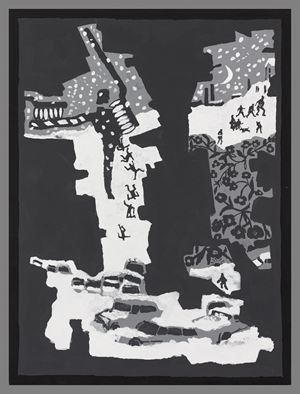 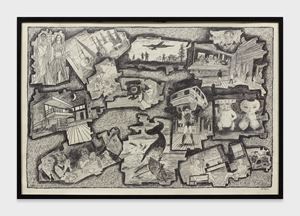 The exhibition consists of three bodies of work: the 'Night and Snow' paintings, his latest drawings based on either a single source of imagery (a newspaper or a television channel) or real life (doctors waiting rooms and cinema foyers) and the third point of exploration: jacquard tapestry1 which Boshier has worked with for the first time. This exciting selection of works reinstates the 82-year-old Boshier to the forefront of his career with works that are representative of his vision and stance today.

The 'Night and Snow' paintings are set either at night or in the snow. Boshier's response to his own research into the subjects he was set to (re)introduce-fashion, gamers, religion, rock music and soccer. Having always had an interest in the sense of a place and how that impacts the on people present. Depicted in his earlier body of paintings 'Otherwise Engaged'2 or the installation Journey / Israel Project, the choice of snow and night setting came about from the uncertainty of its outcome. When describing the works, he quoted Goethe, 'The greatest state that a person can achieve is astonishment'.

The title of the new drawings, Fragments: Contemporary Still Life marks the continuation of Boshier's earlier preoccupations. Aspects of duality, exploring the relationship of image to image and thus documenting common cultural imagery that confronts us daily. It is estimated that we are exposed to 5,000 images a day. 'The relationship of image to image is fundamentally no different from colour theorist's colour matching in that when another colour is put next to it that colour changes,' Boshier explains. 'Advertisers couple totally unrelated images with each other to change and sell a narrative', Boshier continues. His early 1970s exhibition titled Two About Duality, showed the same image depicted in two different ways3. The new series of drawings rearrange narrative via fragmentation within two separate constructs: the source for one are newspaper, magazines and television channels (his favourite one being K Pop channel), for the other it is doctors waiting rooms and cinema foyers or from Boshier's travels (as with 'London/ New York / LA Times' series).

'We are very excited to be showing Boshier's latest work, marking him as a contemporary artist with consistent points of exploration through the past seven decades', says Mila Askarova.

Sign up to be among the first to know when new exhibitions by Derek Boshier or at Gazelli Art House open.
Sign Up
}