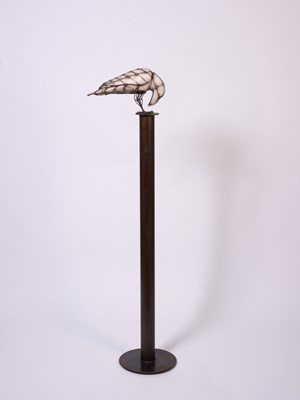 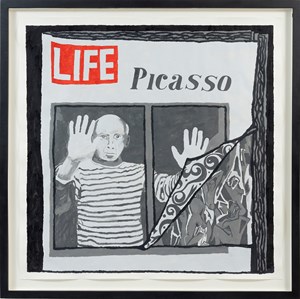 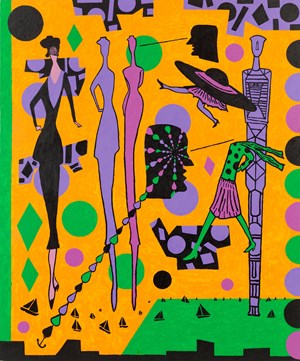 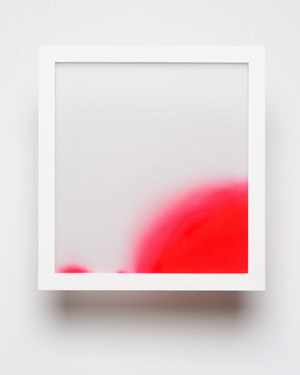 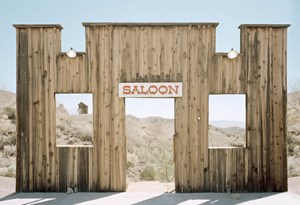 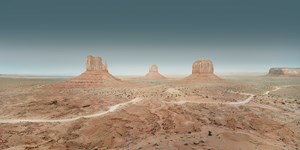 On display is a monumental work by Saad Qureshi created in 2011 for Gazelli Art House entitled Quicken. This incredibly detailed minaret sculpture, or a slender tower typically part of a mosque in which daily prayers are called to Muslims, lays prone on the gallery floor and acts as a dramatic and poignant piece for visitors to experience. Minarets are seen as the ‘stich between heaven and Earth’ and the placement of the sculpture refers back to a memory of the artists’ where he saw a tower collapse in one piece after a bombing.

Artist duo Aziz + Cucher’s Scenapse series is a contemporary take on landscape works. Through the use of digital imaging, the artists create textured works with a tremendous amount of depth that bring these landscape scenes to life. Whether it be a desert, Scenapse #8, or an ocean horizon as in Scenapse Wave Copper, the works depict movement in a contemporary manner that comment on the digitisation of our culture today.

Stanley Casselman is famous for his jaw-droopingly beautiful artworks that create this pure abstraction in the most unusual ways. 'The only place where I find absolute logic is the pure abstraction' explains the artist. Its internal motion is created with acrylic paint or gloss gel medium dragged across the canvas with a squeegee, blended and subtracted with a pallet knife, and textured by ribs. The works evoke strewn confetti and waterfalls as layers of paint peek through, affirming the sublime raw energy of colour.

Charlotte Colbert’s Ordinary Madness series plays with contemporary concerns around our increasingly digital, computer and phone-centric age. Colbert takes the familiar icons of instant communication and places them in a derelict setting, creating a surreal parody of daily life as seen through the prism of twenty-first century language.

At the Royal College of Art, Derek Boshier became close to the notable artists involved in the pop art movement such as Kitaj, Allen Jones, R.B and David Hockney. He introduced icons of American consumer culture with the incorporation of big brand logos. Taking a non-hierarchical approach to the use of popular images has been a long running theme within Boshier’s work. Recently his production provides a witty social commentary on the digitalisation of everyday life and the appreciation, or lack of, of one’s surroundings.

Philip Colbert's large scale oil paintings push the boundaries of contemporary narrative painting. 'We live in a world of ultra pop saturation, a sort of mega pop world where mass intake of Instagram and social media imagery merges with artistic memory'. Colbert’s work follows on from a dialogue established by artists such as Richard Hamilton, James Rosenquist and Roy Lichtenstein.

Jane McAdam Freud follows honestly and tenaciously the 'instinctive unconscious' while working on an artwork, or her unconscious mind might motivate her to begin creating a new piece. She believes that the minutest activity within a person’s mind can direct thoughts and actions, and so she is highly receptive to these movements within her own mind and actively represents them through the process of 'free association.'

Shan Hur is marked by the discoveries found from cultural evolution and constant transitions, by incorporating found objects and antiquities inside his works, he questions the physical space of the gallery. His interventions disrupt the viewer’s perception of the gallery space and the role it plays in showcasing the work.

Francesco Jodice's work from his latest series Sunset Boulevard, investigates the last great Western empire. Jodice rediscovers and captures ‘The American West’ with traces of its magical geological history and recent colonisation such as Hollywood, nuclear testing, and militarisation. The works aim to understand the American ‘long century’ and present an archaeology of the present that is already past.

Kalliopi Lemos’ work continues to participate within a visual sphere of knowledge, perception and awareness into a global narrative. Approaching women’s issues with an acute sensitivity, All is to Be Dared opens up an important contemporary discourse about the role of femininity–both historically and in today’s world.

Giovanni Ozzola's attention has been focused on light as a necessary material for vision. In the centre of his work, he puts his interest and emphasis on three-dimensional space and light. Ozzola produces picturesque images that oscillate between the immediacy of capturing the ephemeral and the carefully constructed artifice traditionally associated with painting—all while evoking the five senses.

James Ostrer's portraits from the Wotsit series is a commentary on human reliance on commodity and trade. The works illustrate the result of corrupted globalisation and increasingly dangerous methods of food production.

Sign up to be notified when new artworks and exhibitions at Gazelli Art House are added to Ocula.