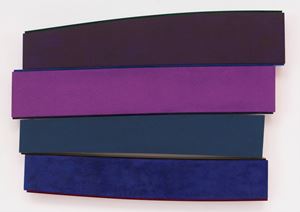 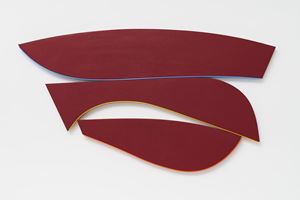 Palo Alto—Pace Gallery is pleased to present a solo exhibition spotlighting Kenneth Noland's 'Flare' series. Regarded as one of the foremost American Color Field painters, Noland began making his Flare series in California in the early 1990s and the works have rarely been presented together since then. Of approximately 15 works featured in the exhibition, a number were conceived and largely produced while Noland spent time in Santa Barbara, where he was continuously inspired by nature and the changing light and colours of the West Coast landscape that surrounded him. On view from January 19 through February 27, 2021, Kenneth Noland: Flares marks the first time that the 'Flare' series has been exhibited as a group in California, as well as Pace's first presentation dedicated to the artist's work at the gallery's location in Palo Alto.

In the late 1950s, Noland broke with Abstract Expressionism's gestural aesthetic, becoming one of the pioneers of Color Field painting and the Washington Color School. During this time he began staining unprimed canvas first with Magna and then acrylic paint and producing paintings with stark geometric shapes and bold colour contrasts. Innovative series, such as his 'Circle' or 'Chevron' works, were systematic yet intuitive investigations of painting's visual elements, especially colour and shape. Eminent critics and artists soon lauded Noland's work, noting his role as a primary force in the development of abstract art. Donald Judd affirmed in 1965: 'by now Kenneth Noland's salience isn't debatable; he's one of the best painters.'

Noland's command over his medium only grew in the following decades. The artist used colour as density and weight, covering entire canvases—which were often shaped irregularly—in order to imbue as much colour as possible into any given work. The 'Flares' represent a new direction in Noland's work, while concurrently encapsulating experiences and concerns that had motivated the artist for decades. In this manner, the 'Flare' series engages viewers in a nuanced visual experience—a journey into the artist's reconfiguration of painting.

One of the 'Flares'' chief innovations is their use of colourful plexiglass strips. Wedged between the irregularly shaped panels of each work, these glossy bands activate a complex interplay among colour, materiality, and form. To Noland, the 'Flares' were 'constructed pictures' with 'separate component parts.' This assembled nature relates them to both collage and sculpture, generating new possibilities. Noland further enhanced the objecthood of the Flares by applying paint or plexiglass to the sides in colours that do not match their frontal surfaces, emphasising volume and mass. The three-dimensionality of these paintings distinguishes them among Noland's broader body of work while also hinting at the artist's lesser-known but seriously pursued sculptural practice.

Kenneth Noland (b. 1924, Asheville, North Carolina; d. 2010, Port Clyde, Maine) attended Black Mountain College in the mid-1940s after serving in the US Air Force during World War II. There he learned about Neoplasticism, Bauhaus theories, and the work of Paul Klee, thus developing an early interest in the emotional effects of colour and geometric forms. In the 1950s, while living in Washington DC, Noland frequently travelled to New York to meet with Clement Greenberg, who introduced him to Abstract Expressionism as well as the stained paintings of Helen Frankenthaler. These encounters sparked an experimental period, during which Noland developed a new genre of abstraction known as Color Field. His exploration of line, colour, and shape unfolds across discrete series, from his 'Circle' and 'Chevron' paintings to his horizontal bands and shaped canvases. In 1977, a major travelling retrospective of the artist's work was presented by the Solomon R. Guggenheim Museum in New York. Memorial retrospectives of his work were presented in 2010 by the Museum of Fine Arts, Houston, and the Solomon R. Guggenheim Museum, New York.

Sign up to be among the first to know when new exhibitions by Kenneth Noland or at Pace Gallery open.
Sign UpLogin