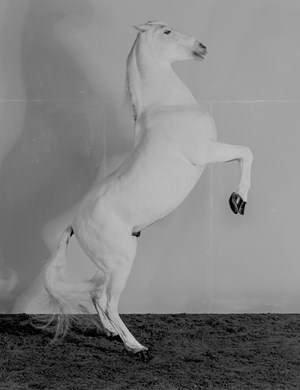 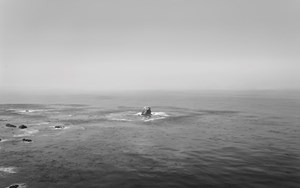 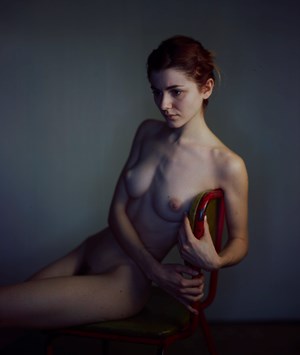 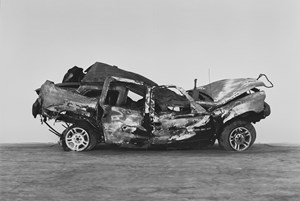 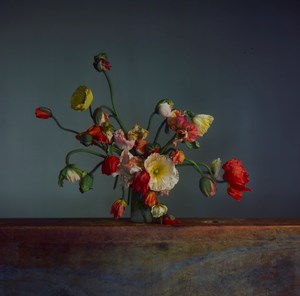 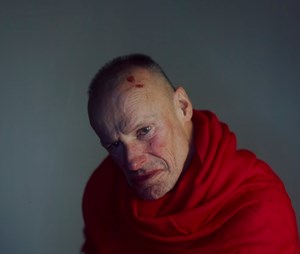 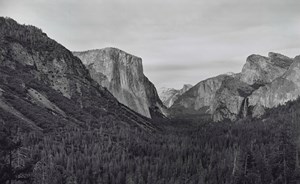 Pace and Pace/MacGill are pleased to present an exhibition of recent photographs by Richard Learoyd, on view on the second and ninth floors of 32 East 57th Street.  Marking the British artist’s second solo show with the galleries, Richard Learoyd Curious will feature never-before-seen large-scale gelatin silver prints, as well as unique colour images made with a camera obscura.  Comprising landscapes, portraits and still lifes, among other subjects, Learoyd’s latest work advances his continued exploration of the technical possibilities of the medium and the limits of photographic expression.  The public is invited to attend an opening reception with the artist on Tuesday 2 April 2 from 6–8pm.

In the second floor gallery, Pace will debut Learoyd’s seven-part sequence of a rearing white horse, alongside photographs of crashed and burned automobiles.  Made from 8 x 10” and 20 x 24” negatives, enlarged to 88 x 68” and 64 x 95” in a custom-built 20 x 24” enlarger, and printed on hand-coated, sensitised watercolour paper, these works are most likely the largest single-sheet gelatin silver prints ever produced.  While reminiscent of Edward Muybridge’s animal locomotion studies, Learoyd’s series chronicles the history of two-dimensional equine representation, from crouching Greco-Roman depictions to Victorian period and present-day portrayals of the horse majestically rearing. The white horse is also significant to Learoyd due to its British symbolism, appearing in prehistoric geoglyphs carved into the chalky hillsides of England.

Considering his pictures of crashed and burned vehicles, Learoyd states: 'The idea is that the world is shaped by catastrophic events.  Maybe that could be extrapolated to people’s lives, maybe our lives are shaped by small catastrophes.  It goes back to that idea that we are all patiently waiting for the end of the world, sometimes, not literally.'  These universal conundrums of life and death, beauty and decay, also inform his one-of-a-kind colour portraits and flower studies, a selection of which will occupy a small adjacent room in the second floor gallery.  Made in his London studio with a room-sized camera that exposes photographic paper directly to light, Learoyd’s images of contemplative sitters and withering blooms become visual meditations on the human condition.

On the ninth floor, Pace/MacGill will dedicate its presentation to six large-scale landscapes photographed in Yosemite and Big Sur in the summer of 2018.  Made with a tent-like, portable 8-foot-square camera obscura of Learoyd’s own design, the featured black-and-white contact prints measure 48 x 77” and render the grandeur of California’s valleys and coastline with unprecedented detail.  Working in the rich photographic landscape tradition of Carleton Watkins, Ansel Adams and Edward Weston, among others, Learoyd set out to visually translate these well-known views of the American West through his unconventional antiquarian practice.  As he explains, 'I was looking for an interpretation of this place through a process...I was driven to those large views because I thought they were actually the most relevant.  I figured all I could do was match myself and my process against some of the things that went before and see whether something new could come from my interpretation of the subject.'

It is Learoyd’s unparalleled passion for the medium and its materials, coupled with his incessant curiosity, that drive him to constantly broaden and refine his photographic approach.  As Learoyd’s ambitious field of vision expands–technically and thematically, inside the studio and out–his images continue to challenge the barrier of illusion and absorb viewers in the experience of looking.

Sign up to be among the first to know when new exhibitions by Richard Learoyd or at Pace Gallery open.