Follow
Hong Kong  |  Select Location
COVID-19 Notification
In January 2015, Pearl Lam Galleries will present its first solo exhibition of Australian artist Ben Quilty’s work, Straight White Male, opening its 2015 programme with one of the hottest contemporary artists of the moment. The exhibition sees a return for the artist to the most traditional forms of art, painting landscapes and portraits, which furthers Quilty’s continued exploration of Australian initiation ceremonies and forms of masculinity.

Since 2007, Quilty has been using a painting technique that creates a geometric monoprint of thick oil paint by pressing a painted canvas onto a clean one. The technique was inspired by the inkblot tests created by the 19th century psychologist and pioneer of mental health research, Hermann Rorschach. Quilty’s reappropriations of these early inkblot paintings involve the viewer in the artist’s process of creating a new visual language; according to the original theory, if the viewers can 'see' figurative images in the inkblots, they were said to be showing signs of paranoid or delusional behaviour. Quilty’s Rorschach portrait works obviously ontain a strong figurative element, and it is through this subversive humour that Quilty looks at notions of the extreme nature of the masculine experience.

Some of the portraits in Straight White Male are of an Australian war veteran, Private Phil Butler, who was conscripted into the Vietnam War in 1970 and spent twelve months at Nui Dat. He subsequently suffers from Post Traumatic Stress Disorder, depression, and insomnia. Having spent October 2011 at the Australian base Tarin Kowt in southern Afghanistan as an official war artist, for Quilty, these paintings are symbolic of the future that the young men who fought in Afghanistan face. By exploring notions of the extreme nature of the masculine experience, Quilty looks for examples of initiation and the participation in rites of passage in western youth culture, which are too often violent and self-destructive, with war as the ultimate portrayal of this initiation. Another subject is Myuran Sukumaran, a convicted Australian drug smuggler, who has been on death row in Kerobokan Prison, Bali since 2005, and a man who Quilty has mentored since 2012. Sukumaran is paying an extreme price for the risk-taking and self-indulgent behaviour of so many young Australian men, and is therefore a very powerful subject for the artist.

The major work in the show is the twelve-panel landscape Rorschach of Fairy Bower Falls, which is located in the southern highlands of New South Wales, Australia. The beautiful site is now a popular tourist destination, but one which has a dark history as the site of a massacre of aboriginal people in the early 19th century. Using the Rorschach practice, the original painted image is both damaged and duplicated in the process of its creation, echoing the disturbance and violence the site has witnessed, and challenging the conflicted histories of colonisation in Australia. Quilty also forces viewers to reconsider their perceptions of a landscape as a place of idyllic beauty in his new series Pacific Island/Ocean, which references his time spent with Sukumaran. The palm trees in these works act as signifiers of the darkness that hides beneath the beauty of a place like Bali.

For me painting is the most vital, immediate and effective way to make a statement about being alive. With the use of the most primitive tools I can quickly make comments about my own existence and of the world as I see it. I am excited to have the opportunity to start that dialogue with native Hong Kong and Chinese collectors and curators. - Ben Quilty 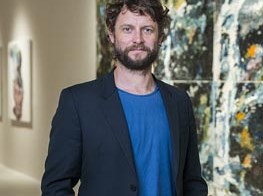 Australian artist Ben Quilty takes a pointed look at race and gender in Straight White Male, an exhibit of new paintings at Pearl Lam Galleries in Hong Kong. In works inspired by a massacre of Aboriginal Australians in the 19th century, poverty in Bali, and the effects of wars in Vietnam and the Middle East, the 41-year-old artist challenges the...

Sign up to be among the first to know when new exhibitions by Ben Quilty or at Pearl Lam Galleries open.
Sign Up