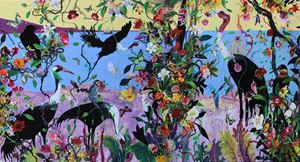 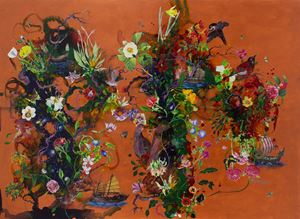 Priyantha Udagedara presents his latest exhibition featuring mixed media work on canvas and paper, including symbols illustrating the history of Sri Lanka as an island sought-after for it's harbours and natural resources. In the artist's distinct style he plays with aesthetic appeal to discuss the subject of post-colonialism, drawing parallels to globalisation and capitalism. Large canvases filled with detailed painting and collage illustrate visuals of nature and historical landmarks both native to Sri Lanka and introduced by colonizers. Priyantha Udagedara creates works with aesthetic appeal that from a distance imply a subject and imagery of a paradisiacal nature. When viewed closely the intense and often disturbing nature of his subject transforms through collaged animal and body parts combined with splattered paint. His watercolour hybrid creature series present the same juxtaposition of beauty and agony, depicting monster and human forms with intricate detail and color.

Born in Sri Lanka in 1975, Priyantha Udagedara entered the Institute of Aesthetics at the University of Kelaniya in Colombo and earned his Bachelor of Fine Art in 2006. In the same year he left the island in 2006 after receiving a scholarship to continue his education in art through the Masters in Art program at the Leeds Metropolitan University in the United Kingdom. One of the most renowned artists and art historians in Sri Lanka with a Doctor of Philosophy (PhD) degree in Contemporary Fine Art Practice and a Master of Arts (MA) degree in Contemporary Art and Design Practice from the Faculty of Arts in the Leeds Metropolitan University through the 'President Scholarship' awarded by the Presidents Fund, Sri Lanka in the year 2006. While his earlier work too consisted of fantastical, layered colour, this new series of work that he first exhibited in 2010 at Paradise Road Galleries, began to show clear signs of a deeper evolution that had begun to take place in Udagedara's practice. Before returning to Sri Lanka in 2014 he presented solo exhibitions of his PhD practice exhibition at the Norman Rea Gallery in York and Broadcasting Place Gallery in Leeds.

Since the year 2015, he has been serving as a lecturer in University of Visual and Performing Arts, at the Department of Art History and Theory University of Visual and Performing Arts Colombo and he has been serving as a visiting lecturer at the American National College Colombo. In 2016 Priyantha Udagedara presented his first solo international exhibition at Grosvenor Gallery in London followed by group exhibition participation at Aicon Gallery New York in 2017 and Baik Art Los Angeles in 2019. His work has been presented at Art Dubai, India Art Fair, Leeds Art Fair and the LA Art Show.

Priyantha's principal research interests lie in the field of contemporary fine art practice focusing upon South Asia. His PhD research explores the contextual analysis of the "Notion of Paradise" in its relationship to socio-political ideology within the limitations of visual art. His future research plans will build on the foundations of his PhD to further develop research in visual art practice within Sri Lanka and the region. He has particular expertise and research interest in colonial-art, post colonial art and contemporary Western and Eastern visual culture. He is a practicing artist specializing in paintings and has exhibited nationally and internationally in countries including Sri Lanka, India, Australia, Portugal, Dubai and Great Britain.

Sign up to be among the first to know when new exhibitions by Priyantha Udagedara or at Saskia Fernando Gallery open.