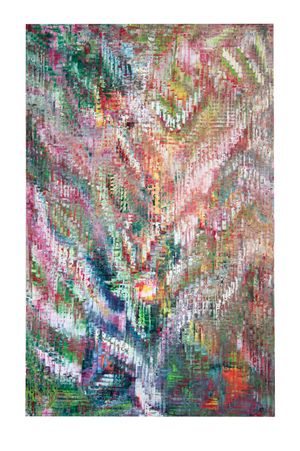 After two years of cooperation with the artist, SETAREH presents the first solo exhibition of Sassan Behnam-Bakhtiar in our gallery space on Königsallee. The exhibition entitled Extremis includes over twenty new works and deals thematically with the extreme life experiences and stages of the Franco-Iranian artist.

In his colourful paintings, the internationally active artist has developed a signature style of scraped painting—oscillating between figuration and abstraction. His multi-layered depictions are created using a special technique in which the prepared surface is divided into small squares with a spatula. The upper layers of paint are scraped off, leaving the layers below exposed and interwoven. The paint, which has been left to dry until it reaches the correct consistency, is thus less shifted and more removed from the canvas. The colour that has dried until the right consistency is reached is partially removed from the canvas. The colour substance collected in this way becomes the basis for the coating of later works. Its further use ensures a material continuity within the works that succeed one another, which are sometimes created in processes that last for months.

The works, which are created in small structures covering the entire surface, unfold their full effect for the viewer above all in the direct juxtaposition and, depending on the incidence of light and the angle from which they are viewed, change in various facets. These colour variations expand the viewer's perceptual horizon with regard to an ambiguity created in the pictures. This favours a space of reflection reserved for art, which is necessary for an aesthetic experience within which senses and intellect come together.

The figures and local conditions that are repeatedly hinted at in these works seem to be viewed through a kaleidoscope and broken up into crystalline forms. On the one hand, the colourful facets of these pictures are sometimes reminiscent of well-known European predecessors—such as the French pointillists or the École de Paris of the late fifties—on the other hand, they also reveal a millennia-old tradition of Persian mosaic craftsmanship. In addition, these scraped square structures appear a little like pixelation of computer graphics and distorted digital images, which they are quite capable of placing in a contemporary context of our life reality determined by digital image technologies.

Behnam-Bakhtiar's pictures indeed build a bridge to a Persian pictorial tradition unfamiliar to European eyes, which at times may seem aestheticizing and figurative. From an eastern point of view, however, they may appear comparatively abstract and systematized. In fact, these works combine the artist's cultural identity with the influences of European art history and Western perceptions.

The painterly quality of the pictures allows the canvas to become a resonance body for the viewer and manages to integrate them into a dialogue situation. The physical presence in front of the pictures ideally leads to the fact that the memories and experiences inscribed in them are subtly transferred to the viewer on an aesthetic-symbolic level.

All the works shown are closely linked to the artist's eventful life: With insecure places, extreme experiences, the painful abandonment of home; with deprivation, danger and human isolation. And yet Sassan Behnam-Bakhtiar succeeds in sublimating these abysmal aspects in an artistic way, turning them into positive things on a symbolic level and transferring them into his works with a melancholic beauty.

Sign up to be among the first to know when new exhibitions by Sassan Behnam-Bakhtiar or at SETAREH open.
Sign Up