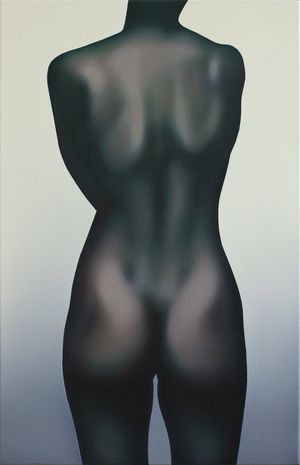 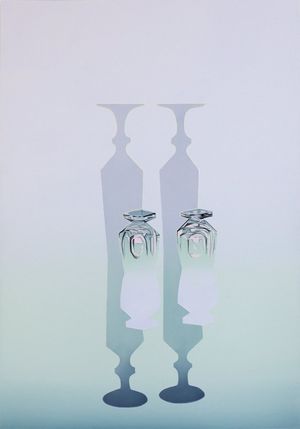 SETAREH is pleased to present the next episode of 'Studio Views', an online series displaying recent works of artists represented by the gallery. This Viewing Room highlights the latest works by Astrid Styma. In Astrid Styma's (b. 1988, lives and works in Düsseldorf) subtle paintings, items and the human body appear isolated without a situating environment and seemingly without spatial or contextual relations.

In some paintings, the clear, stylised forms of crystal glasses stand out against backgrounds of delicate, pastel colour gradients, while in another series of works it is the naked human body (parts)—including the artist's—that show, sometimes expose, themselves to the viewer's gaze. The smooth to fragile silhouettes reveal much of the three-dimensional sculptural qualities of these bodies, of the texture of their surfaces, of their soft- or coldness.

The paintings are reminiscent of traditional subjects, of 19th-century portraiture and nude painting, of baroque still life, or even more so of the meticulous detailed studies of individual motifs that underlie the opulent paintings. From old-masterly to hyper-realistic painting techniques, the artist makes such skilful use of the various drawing and painting methods that she simultaneously succeeds in clandestinely undermining their illusionistic quality.

Thus, moments of digital image editing also intervene in the pictorial aesthetics—as if through a filter or the cropping mode, the human, the glass or the vase appear partially cut out, blurred and reduced to a sculptural or plane body—which in Styma's work, on the one hand, intensifies the attraction and increases the intimacy, but at the same time objectifies the motif, enraptures and relentlessly exhibits it.

In this way, the bodies in Styma's paintings also tell a lot about our relationship to the material environment; about its meaning as a counterpart and our desire beyond the aspect of its functionality. The glass vessel has lost its volumetric capacity due to form, position or location in the painted portrait, and yet it obviously lacks none of the painter's appreciation.

It is carefully rendered in detail, not only recognisable but also understandable. Similarly, Styma's depiction of the human body is bluntly direct and at the same time implies underlying areas of tension of personal and interpersonal nature.

Styma's works possess a sublime impact. Subtle shifts in the combination of motif, style, and representation literally disenchant the 'painterly' illusion, tipping the art-beautiful into the unadorned. Instead of seducing us into alternative worlds, Styma's paintings point directly back into their own direction, casting a cold light on the 'subject of contemplation'. They are exciting because reality is skewed here, but does not tip over—because Alice staggers towards Wonderland, but does not fall.

Sign up to be among the first to know when new exhibitions by Astrid Styma or at SETAREH open.
Sign Up