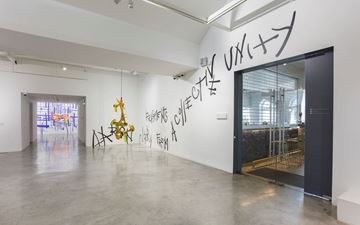 Building layers of meaning and memory through print and papermaking, Qiu explored critical issues of freedom and destiny by focusing on the geopolitical and psychological attachments to the ancient capital Nanjing City or "City of Failure" for its past of massacres and wars. Informed by historical, social and academic issues of significant cultural import, Qiu's creative expositions took these works into the realm of social action, and are a prelude to future installations on the Nanjing Yangtze River Bridge Suicide Intervention Project.

Qiu's works have been presented at international institutions and platforms including Art and China after 1989: Theater of the Worlds, Guggenheim Museum Bilbao (2018), Singapore Biennale 2016: An Atlas of Mirrors, Singapore Art Museum (2016), the 56th Venice Biennale: All the World's Futures (2015) and A Suicidology of the Nanjing Yangtze River Bridge 4 - On Levelling All Things at Art Museum of Nanjing University of the Arts (2014).

"Coming to the STPI makes me feel like going back to my student days, but I never completely left printmaking because many of my performances have links to printing." Qiu Zhijie (Jessop, Sonia Kolesnikov. "Qiu Zhijie Adds Provocative New Meaning to Traditional Calligraphy". The New York Times, 13 June 2008.)

"In the past, the key word in our society was revolution, but right now the key word is success. You have only two choices: success or failure. That's the reason why so many people kill themselves on this bridge. They come to this symbolic place, which is so tall, so powerful." Qiu Zhijie (Jessop, Sonia Kolesnikov. "Qiu Zhijie Adds Provocative New Meaning to Traditional Calligraphy". The New York Times, 13 June 2008.) 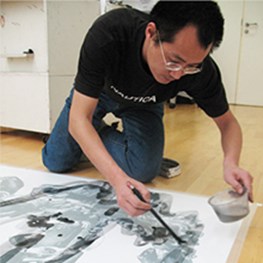