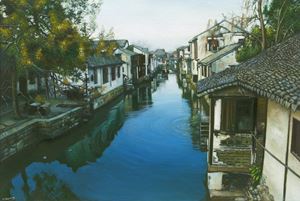 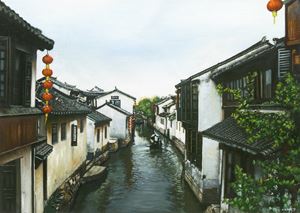 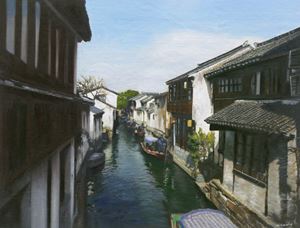 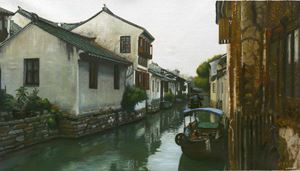 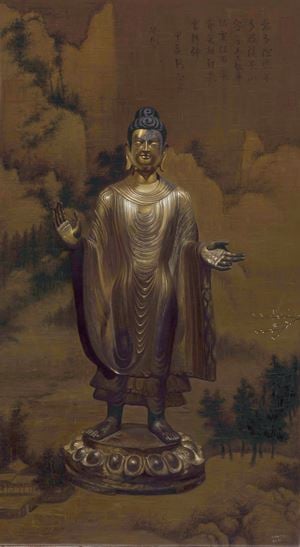 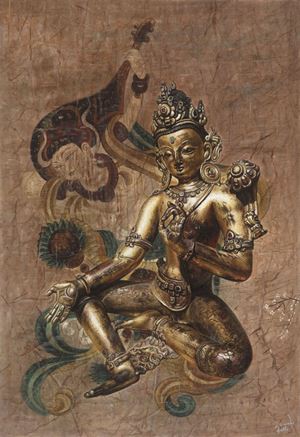 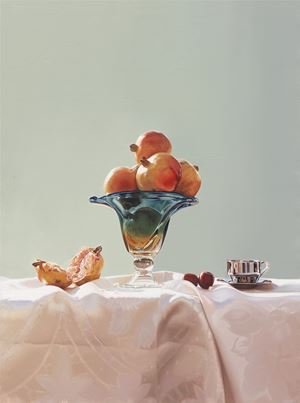 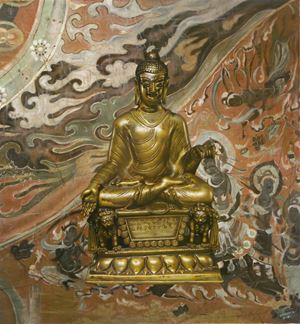 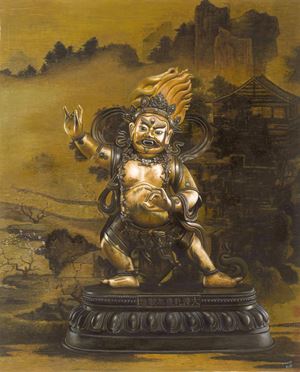 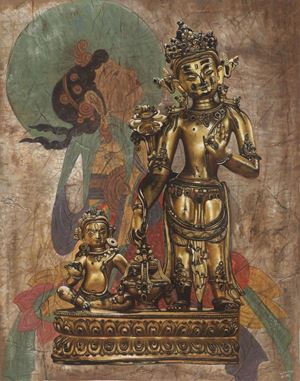 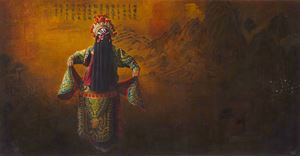 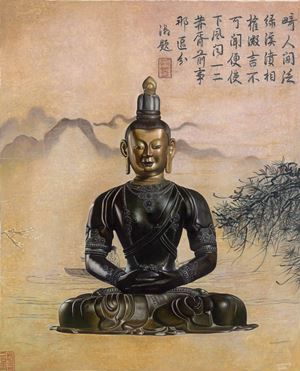 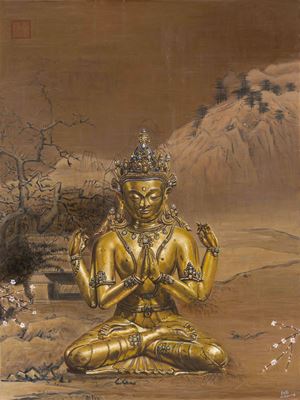 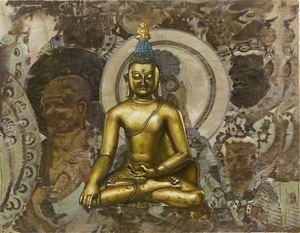 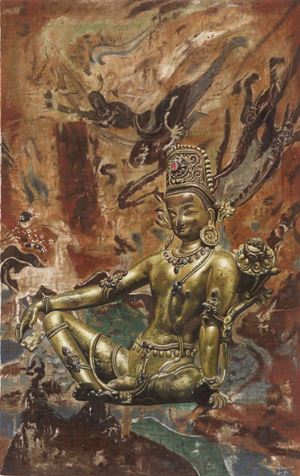 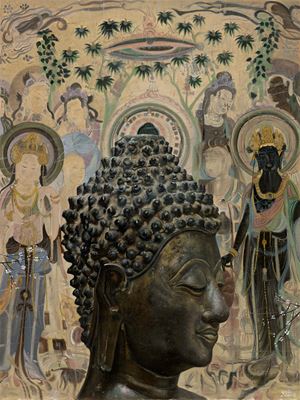 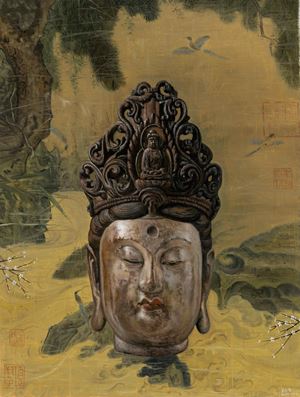 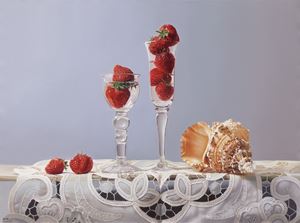 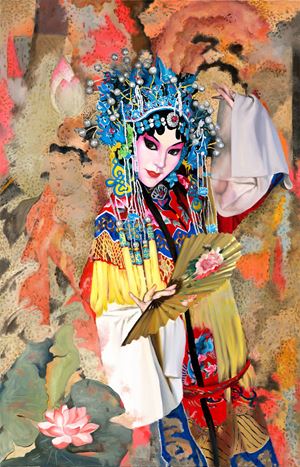 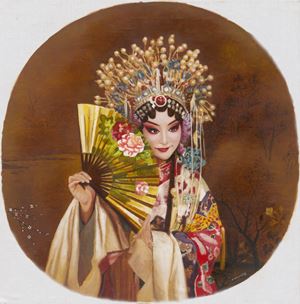 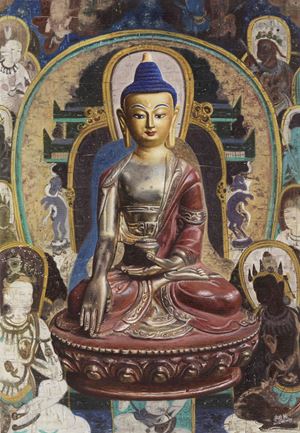 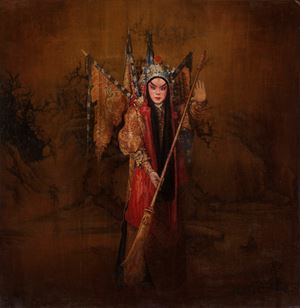 Tang Contemporary Art Bangkok is proud to present Mi Qiaoming: Layers of Tranquility on 14 November. Young artist Mi Qiaoming studied abroad in Russia, and she received her Ph.D. from the Repin Art Institute. Her long formal education laid the foundation for her realist oil painting skills. After she returned to China, she attempted to explore the fusion of Western oil painting and Chinese ink painting, slowly establishing her personal style. This exhibition will present three series: Buddhist Charms and Auspicious Images, New Peking Opera, and Southern River Town.

In Buddhist Charms and Auspicious Images, Mi uses Chinese literati landscape painting, bird and flower painting, and Dunhuang apsara wall paintings as the background. In the foreground, she depicts gilded Buddha statues using realist methods, and decorates the corners of the images with peach or cotton tree flowers. In the backgrounds, Mi presents themes from Chinese antique painting in oil. The brushwork is natural and casual, and the colors have a simple, dignified texture. Her choice of ancient paintings comes from her explorations of the spiritual implications of traditional Chinese painting, such as the ideas that 'the law of the Dao is being what it is,' or that the artist can 'understand someone's nature' through a Buddhist heart, a Buddhist realm, a Buddhist interest, or a Buddhist energy. She uses Western oil painting techniques to depict Eastern Daoism and Buddhism and she employs contemporary brushwork in presenting historical poetry, all of which allows her to share her re-interpretation and re-creation of traditional culture.

The brushstrokes used in the backgrounds to the sculptures are as fine as the mottled gilding of the statues themselves, which are depicted with steady, dignified modeling and colouring, and soft shading. The surreal representation of objects is not Mi Qiaoming's creative intent; in her work, she retains the Eastern cultural sentiment of the Chinese Buddhist painting aesthetic. She not only plays to the qualities of the Buddhist painting language, but she also adds imagery from the contemporary Eastern aesthetic system, in an attempt to transform traditional Buddhist painting into a contemporary aesthetic form. The peach blossoms embellishing the images bloom beautifully; they are the only things that represent life in the work. The two or three peach branches are permeated with a vivid life force, giving the works a lively, witty air.

Mi Qiaoming's New Peking Opera series is the combination of her 'Peking Color' and 'Buddhist Charms' and 'Auspicious Images' series. Through the skillful selection and refinement of elements, she has derived a new artistic look. On the foundation of the larger backgrounds and undertones of ancient paintings, akin to Buddhist Charms and Auspicious Images, the opera figures who are the subjects of the paintings are depicted with realist techniques. The exquisite decoration on the actors' heads, their magnificent clothing, their careful makeup, their beautiful faces, and their joyful expressions are incredibly vivid. Mi de-emphasised the treatment of the clothing on the figures' lower bodies, and this expressive method focuses the viewer's attention on the figures' faces and expressions, which further highlights their internal worlds. The blend of realist and expressionist techniques in these works reveals an elegant and romantic poetry.

Southern River Town series is Mi Qiaoming's latest series, painted in 2019. It features a theme favored by Wu Guanzhong, Chen Yifei, and other noted painters. Narrow rivers, stone bridges, waterside homes, berthed boats, and lush trees are all permeated with a peaceful, calm atmosphere. Mi uses hazy washes to show gradations in tone, expressing the glistening elegance of these water towns and infusing her realism with a cool Eastern charm.

In the Buddhist sutras, all appearances are false. Buddhists understand the world through experience, not cognition. Whether she references Buddhist sculpture or depicts Peking opera characters and southern river towns, her paintings have a direct impact on the viewer. All of these subjects are related to our experiences. By passing through these inner experiences, they push us toward the highest realm of existence, and they propel the body and mind into a full, self-satisfied state. We return from the confusion of the real to an understanding of layers of tranquility.

Sign up to be among the first to know when new exhibitions by Mi Qiaoming or at Tang Contemporary Art open.