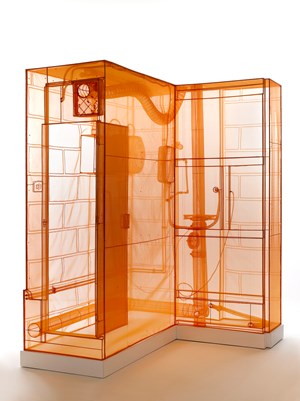 Victoria Miro is delighted to participate in Art Dubai (Booth A4) with a three-person presentation of works by Alex Hartley, Idris Khan and Do Ho Suh. Influenced by architecture, the language of minimalism and geometric abstraction, the works are united by a consideration of boundaries - between public and private space, quantifiable form and immeasurable subjective experience.

Alex Hartley's work addresses complicated and sometimes contradictory attitudes toward the built and natural environments, showing us new ways of physically experiencing and thinking about our constructed surroundings - through surface and line, scale and materials, locations and contexts. In The Houses, a series of new, wall-based works, made especially for Art Dubai, Hartley brings together photographic and painterly elements to examine the idea of the boundary - between interior and exterior, manmade and natural environments, two and three dimensions, object and image. Classic examples of modernist domestic architecture, photographed by Hartley primarily in Los Angeles, form the basis of these works, in which the photographic image and hand-painted elements - describing and embellishing the verdant West Coast landscape - are separated by a layer of semi-transparent Perspex. Encapsulated in the work are ideas of privacy and voyeurism, the modernist ideal and its lived legacy. Major works by Alex Hartley have recently been featured in the Yokohama Triennial (2017) and the Folkestone Triennial (2017).

Recent works by Idris Khan examine the boundaries between form and formlessness, light and its absence, rational and irrational thought. Absorbing Light I, 2017, is a patinated cast bronze floor piece comprising blocks of various dimensions, each stamped with numbers and texts and distributed in seemingly random configurations. Marking the first time the artist has worked with bronze, the installation is influenced in part by the language of minimalism. However, unlike the minimalists, for whom mathematical order and purity were bulwarks against darker forces of entropy and disorder, Khan brings into play a host of fragmentary voices and contradictory readings. Texts are further incorporated into monochrome paintings such as The Pain of Others (No.1), 2017, and The Pain of Others (No.2), 2017, made with large-scale stamps, applied repetitively to the surface of the canvas. In these intensely visceral works, where addition and erasure become as one, Khan pushes his subject matter to the cusp of legibility. Idris Khan's Monument and Pavilion of Honour for Wahat Al Karama, UAE's Memorial Park, was unveiled in 2016 and received an American Architecture Prize in 2017. Khan was appointed an Officer of the Order of the British Empire (OBE) for services to Art in the Queen's Birthday 2017 Honours List. A new work by Khan has been commissioned for the re-opening of Kettle's Yard, Cambridge, and is featured in the exhibition Actions: The image of the world can be different (until 6 May 2018).

Do Ho Suh's work stems from the measuring of space and the processes, rational yet sensual, that enable him to determine and connect with his surroundings. Inspired by his peripatetic life, the artist has long ruminated on the idea of home as both a physical structure and a lived experience, the boundaries of identity and the connection between the individual and the group across global cultures. Meticulously replicating the architecture of the places in which he has lived and worked, such as his childhood home and Western apartments and studios, Suh's one-to-one scale translucent fabric structures, such as the exquisitely detailed Boiler Room: London Studio, 2015, give form to ideas about migration, transience and shifting identities, while examining the ways in which personal space inherently extends into the collective sphere. Do Ho Suh: Almost Home, which includes a major installation of the artist's Hub sculptures, opens at the Smithsonian American Art Museum on 16 March 2018, running until 5 August 2018. Passage/s, the artist's first solo exhibition in Scandinavia, is currently on view at Bildmuseet, Umeå, Sweden (until 15 April 2018).

Additionally, Victoria Miro will have works available to view by Yayoi Kusama.