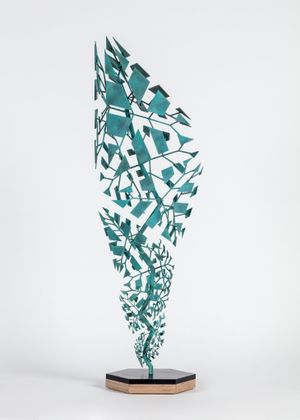 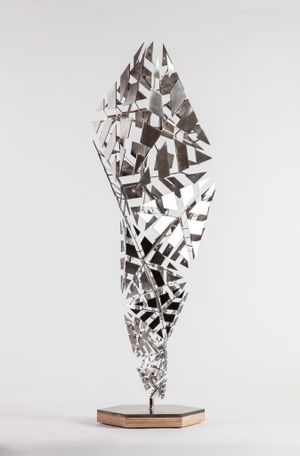 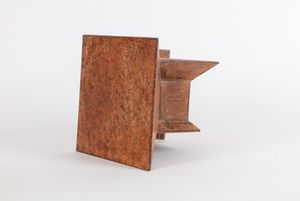 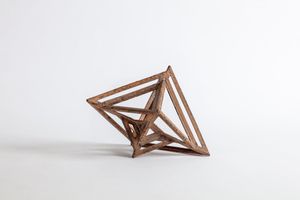 Victoria Miro is delighted to present an exhibition in Venice by Conrad Shawcross. Coinciding with the opening of La Biennale di Venezia: The 17th International Architecture Exhibition, this presentation features a number of the artist's celebrated Fracture sculptures and prints from a new body of work, The Patterns of Absence.

Conrad Shawcross creates sculptures and installations that, imbued with an appearance of scientific rationality, explore subjects that lie on the borders of geometry and philosophy, physics and metaphysics. He has gained a global reputation for extending the possibilities of art in the public realm, and in dialogue with architecture, with permanent commissions in the past five years including: Schism (Château La Coste) (2020), a monumental commission on permanent view in the grounds of Château La Coste, Provence; Bicameral (2019), a major public sculpture at the Chelsea Barracks development in London; Exploded Paradigm (2018), created for the Comcast Technology Center building, designed by Foster + Partners in Philadelphia; The Optic Cloak (2016), a permanent commission for The Energy Centre Greenwich Peninsula, London; and Paradigm (2016), a permanent commission for the Francis Crick Institute, London. Pioneering Places_, a major public art work for Ramsgate Royal Harbour, in connection with Turner Contemporary, will be unveiled in May 2021. The artist is creating a major new public artwork,_ Manifold_, for the Crossrail Elizabeth line at Liverpool Street, London, which will be positioned outside the Moorgate entrance of the new station when it opens in 2022.

This exhibition features a number of the artist's Fracture sculptures in a variety of scales and materials including weathering and stainless steel, and patinated bronze. Borne out of his celebrated Paradigms, which are an ongoing exploration of the tetrahedron—geometrically a four-sided non-tessellating form and conceptually the symbol of an indivisible unit of matter—Shawcross' Fractures are ethereal forms that seem almost to disappear as they rise up and expand. Imbued with references to the manmade and natural worlds, each Fracture contains a central helical stem, a twisting spine that supports a series of branches which in turn support hundreds of fragments that dissipate in precise formation.

For Shawcross, an aesthetic of the designed, the scientific and the rational serves as a device to cloak more poetic, philosophical and metaphysical themes, which are foregrounded in his Fractures. As he says, 'These Fractures have many references. They are, on one level, very industrial and geometric. On another level, I've taken references from the pattern on a giraffe's neck, to the dappled light of the sun through a woodland canopy, to the bifurcation of trees and the way that branches grow, emanate and spread... I hope that they feel very industrial, refined and minimal and at the same time that they have this resonance that sends your brain back to something that's familiar, something that's natural, something that is profound and beautiful and ubiquitous.' An inherent temporal aspect of the work is amplified when seen across an installation, or field, of Fractures. A variety of surfaces and materials articulate the field array; matte surfaces counterpoint reflective skins each creating different reactions to light, all of which further accentuate feelings of change and entropy, expansion and dissipation.

Conrad Shawcross, RA, was born in 1977 in London, where he currently lives and works. Forthcoming and recent major exhibitions and commissions include Escalations, a solo exhibition held at Chateau La Coste, Provence, France in 2020, where the artist's monumental new permanent commission Schism (Château La Coste) remains on view; Pioneering Places, a major public art work for Ramsgate Royal Harbour, UK (to be unveiled May 2021); and an exhibition to mark the 800th anniversary of Salisbury Cathedral, Wiltshire, UK (2020). Shawcross will create a major new public artwork for the Crossrail Elizabeth line at Liverpool Street, London. Titled Manifold, the bronze sculpture will be positioned outside the Moorgate entrance of the new station when it opens in 2022.

The Measures of Change

Sign up to be among the first to know when new exhibitions by Conrad Shawcross or at Victoria Miro open.
Sign UpLogin