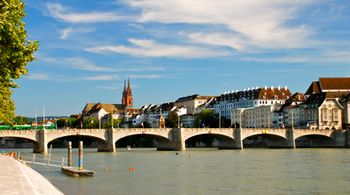 Straddling the Rhine in the Northwest of Switzerland, the populous university town of Basel has long been a centre of culture and learning. Basel, the final resting place of famed European scholar Erasmus, equally embraces tradition and modernity—evident in its contrasting makeup of Medieval buildings and Swiss modern architecture.

Art has long been a core part of Basel's identity. The art galleries and museums across the city are filled with the fruits of centuries of art collecting. While reverent to tradition, Basel also maintains a thriving contemporary art scene. The city is also associated with the leading international art fair, Art Basel, that began in the 1970s.

Basel is home to over 40 museums and institutions dedicated to history and the arts. Their focus ranges from Basel's Roman past, displayed at the archaeological site of Augusta Raurica, to 20th- and 21st-century design, celebrated by the Vitra Design Museum.

Located in the historical heart of Basel are some of Basel's best-known international institutions. Kunstmuseum Basel, a three-building municipal institution, boasts a collection spanning from the Medieval era to the present. Kunsthalle Basel is the city's oldest-running art institution, dating back to the late-19th century, and presents new and innovative works by international and Swiss artists. Older still are the nearby Museum of Cultures and Natural History Museum Basel.

Just around the bend in the river is the Museum Tinguely, which houses the world's largest collection of art by Swiss Dadaist sculptor Jean Tinguely. Further out in the city's northeastern municipality of Riehen, one finds the Fondation Beyeler, a popular art museum and collection presenting curated exhibitions of modern and contemporary art from around the world.

Basel is also home to several independent galleries and art spaces spread across the city's centre. This includes international contemporary art galleries like the long-running Von Bartha, established in 1970, and newer spaces like Anne Mosseri-Marlio Galerie and Vitrine. Gagosian also opened a space in Basel's Altstadt in 2019.

One can also find non-profit and artist-run spaces like SALTS, operating out of a physical space on the outskirts of the city; the Basel Art Centre in the Basel-Vorstädte; Voltage, a studio and exhibition space in the district of St. Johann; and the Klingental Exhibition Gallery on the grounds of the former Klingental convent.

Reflecting its location to both the French and German borders, Basel also hosts several unique cultural festivals. Best known is Fasnacht, a three-day carnival that begins on the first Monday after Ash Wednesday.

Image: The Middle Bridge over the Rhine in Basel. Photo: Lucazzitto. CC-BY-SA-3.0.

Past Exhibitions In Basel