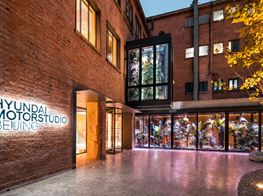 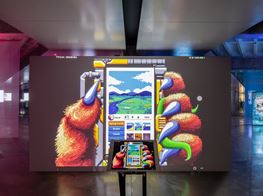 Founded in 2017, the Hyundai Blue Prize is an annual award for emerging Chinese curators sponsored by Hyundai Motor Company and Hyundai Motorstudio Beijing.

On 22 December 2020, the Hyundai Blue Prize announced two winning exhibition proposals submitted to an open call on the theme 'Resonant Cities': Wang You's Dream Monolith and Revelation and Chen Baoyang & Shao Xiaoming's Coordinates ~Skybox, which will be presented at Hyundai Motorstudio Beijing in 2021.

'Reading these proposals,' said Cornelia Schneider, Head of Global Experiential Marketing at Hyundai Motor Company, 'I was impressed by the creativity and sustainability in their perspectives of the future, and their thought-provoking and creative ideas regarding the relationship and interactions between humans, technology, and urban culture.'

Dubbed the 'first exhibition of Space Art in China', Wang You's proposal builds on her experience co-operating with aerospace institutions and companies to explore space-travel technology.

Through works by 12 artists, including installation, sculpture, readymade, video, and photography, Wang You will consider the advancement of space-travel technology, which has enabled a leap in knowledge of outer space, and in turn, a clearer understanding of earth.

Interwoven in this proposal is a reinterpretation of ancient Chinese texts, including a poem from the Jing dynasty that imagines a celestial journey. The curator appeals to audiences to think with—not about—the universe to renew understandings of life on earth.

In Chen Baoyang and Shao Xiaoming's proposal for Coordinates Skybox, the city is defined as an interface between human beings and the world.

The title follows the exhibit's inner logic, which is to discuss urbanism through the language of gaming. The coordinates refer to groups of numbers representing three-dimensional space, whereas Skybox refers to the visual boundary or backdrop in virtual games.

The exhibition will give audiences the opportunity to play games, with 19 artworks drawing parallels between our manipulation of the virtual world and urban space.

Inspired by the history of urban planning in Beijing, Chen and Shao are interested in the prescribed rules of urban space and their impacts on daily life. An app will be launched concurrently with the show, giving online audiences 24-hour access to the exhibition and the ability to modify its content.—[O]

Translated by Joanne He Yongxuan and Penny Liu.

Hyundai Motorstudio Beijing is a brand space which conveys the company’s disruptive thinking for social and technological development and experimental approaches that combine the arts, technology, and environmental sustainability.

AI is a pun. It is the pronunciation of 'love' in Chinese pinyin, and at the same time, stands for 'Artificial Intelligence' in English. The two alphabets express the exhibition's focus, which is to present the love that this generation has acquired