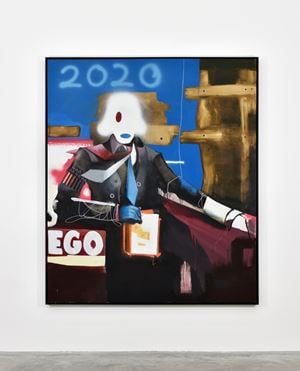 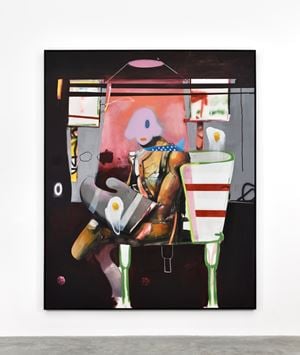 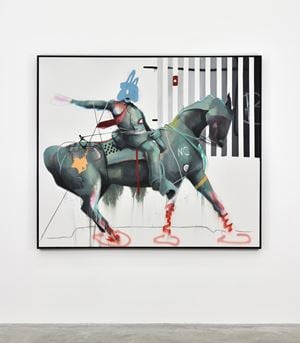 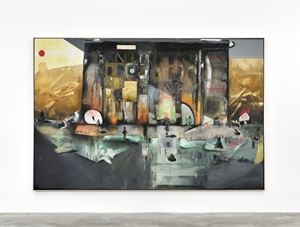 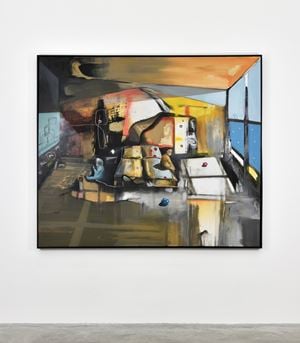 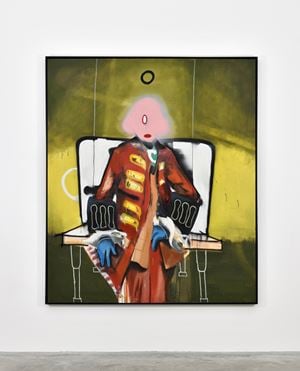 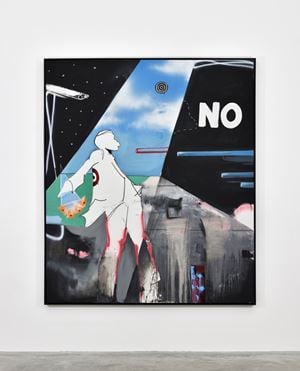 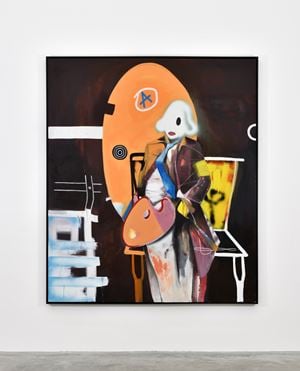 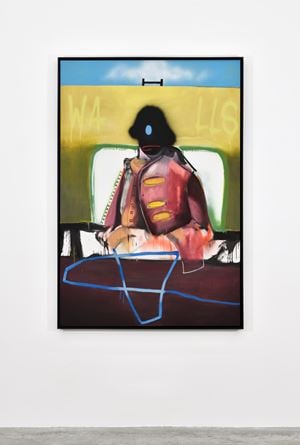 Any discussion of Marcus Jansen's work would be invalid as long as there is no mention of his intense life journey, the circumstances that influenced the way he is experiencing the world, and the way he conveys his emotions and concerns into his art. Jansen's childhood years in the Bronx and Queens (New York) in the 1970s were in stark contrast to his adolescent years in Monchengladbach, Germany, where he went to art school and was exposed to European culture and lifestyle. After serving eight years in the US military and getting a first-hand experience of some of the most devastating and crucial events of the 20th century, he went back to his genuine love for art and used it as a channel for his thoughts, worries, fears, and emotions. This complexity of influences directly impacts his creative output, which consists of compounded storytelling images constructed in an abstracted or surreal setting and filled in with familiar iconography. It's the use of such iconography that functions as emotive anchors towards building an impassioned structure within which his paintings exist, speaking of themes of greed, war, surveillance, media culture, propaganda, and structures of power. By assembling his visuals from symbols that evoke certain emotions, the artist designs an ambiance that depends on the viewer's focus, much like the real-life. 'My work is always meant to challenge the intellect in an anti-intellectual climate we are in today by composing awkward compositions like a puzzle suitable for anyone viewing it from their life lens but forcing them to engage critically,' the artist explains the way his imagery is constructed. Such an experience is further accentuated by the masterful use of paint qualities and suggestive details that add to the storyline a sense of time passing by. Whether it's simple tally marks on a wall, a ladder protruding over a barrier, or a runny egg, the images often go beyond freezing a moment and are instead telling a larger story using the vocabulary of painting.

It is this larger story that's the main focus of his debut solo exhibition with Almine Rech in Paris—a big European comeback for the American artist with strong connections with the old continent. 'As most of my works, these too were intuitive responses to our contemporary life today, rooted in questioning human, political, and economic structures of power and how fictitious power structures can lead humanity's direction or even filter our decisions to react to purely human concerns,' Jansen states about this particular body of work in which he is reexamining the concept of faceless portraits he started back in 2011. With a more earnest focus on the single subject and briefly stepping away from the depiction of war-torn, desolate environments and landscapes, these works not only put into question who are the real people who today make the crucial decisions they also empathically deface these same rulers and diminish their power.

Just as the economic inequality sparked his initial interest in exploring this theme about a decade ago, the recent nationwide anti-authoritarian, anti-police brutality, and civil rights protests revived his absorption in these matters. This has led to new works which are a continuation of the artist's interest in exploring the paradoxes and tensions that create the reality we live in. Without facial expressions, the implication of ethnicity, or any other prominent features, Jansen's obscured figures do not reflect a specific group, yet unequivocally carry a sense of authority. The assortment of star-spangled marks may reveal the source of the artist's main interest, but the environment—often built from gestural spray paint or expressive paintbrush marks—and the semblance of those portrayed are still universal enough to be any authority anywhere, regardless of whether they represent economic, psychological, or historic power.

Furthermore, the attitude and importance of authorities are often undermined and shaken by the narrative built around them, most notably in David and Goliath (2020), where a historic monument as a symbol for certain ideology dissolves into graffiti marks that set off its defacing and dismantling. Confederate or WWII regalia, armbands, or red, white, and blue ties are the main elements of the narrative that Jansen is conveying, clearly referencing the tension and dynamics of social and political changes in his homeland. Yet, in addition to that, the images of Polkadot balls, walls, graffiti scribbles, target-like symbols, inaccurate math equations, palettes, and an amalgam of different uniforms and insignia, are sparking a supplemental set of emotions which provide a more elaborate, insightful, and globally applicable overview of the themes in which the artist is interested in. Driven by personal, sometimes unconscious experiences, Jansen's works are focused on giving a visual consciousness to global social struggles, with clear political undertones though without an explicit statement on defying good or bad figures.

'Works that highlight human concerns.' This simple yet utterly accurate and all-encompassing description of Marcus Jansen's work provided by the artist himself defines it better than countless attempts to link it with the existing artistic genres or styles. Over the years, his oeuvre has been challenging such attempts through the application of various approaches, techniques, and mediums, all while staying truly instinctive, honest, and emotion-driven. Whether you're looking at action painting elements in During COVID #2 (2020), Magritte-like blue skies in Walls (2020), graffiti references in David and Goliath (2020), or the cartoon-like faces of his diminished subjects, the artist is confidently jumping between styles and aesthetics, as well as between historic art and popular culture references. Armed with the conviction and nonchalance of expressionists, the unmediated attitude of abstractionists, the rawness and urgency of graffiti writers, and the energy and drive of action painters, Jansen's works are equally too complex to pinpoint to one style and recognisable enough to not mistake for anything else.

Sign up to be among the first to know when new exhibitions by Marcus Jansen or at Almine Rech open.