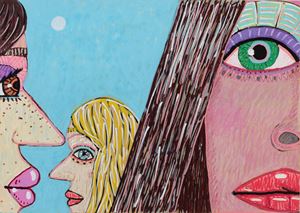 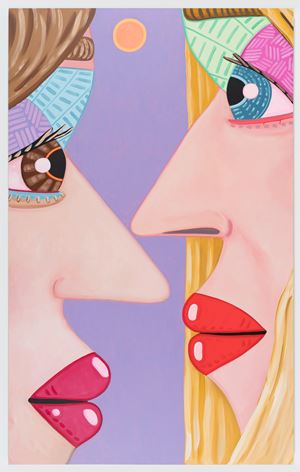 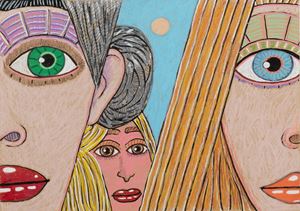 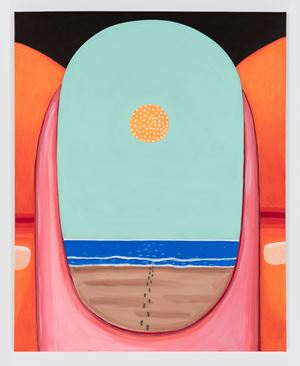 Almine Rech Shanghai is pleased to present Sound, an exhibition of Brian Calvin's recent portraits. Opening on January 10th 2020, the exhibition continues the artist's exploration of the unique genre of painting, and furthers the Calvin's distinct development of emotions and imagery. The exhibition is on view until April 11 2020.

Selfies today entail more than the mere act of taking photos of one's face. It is one's search from a myriad of information for the elements most intimate to one's illusion of his or herself. Or, a convenient and easy way to exist in the most 'ideal' fashion. Because the validity of a selfie has much to do with other's attention to it (the number of likes), it has to also accommodate recognition and resonance that are collective in nature. Therefore, the image produced by a selfie act is not a result of self selection, but is a way of existence propagandised by the external world. Brian Calvin's lushly lipped women wearing heavy makeups desperately build their own selves, attempting to come closer to the constructed illusion. The delicate cosmetic arrangements render the faces assembly line products, reflecting universal desires flowing in the society. When the selfie act that initially implies self-recognition is transformed into a crowd-pleasing gesture, the subjectivity of the painting subject flees from itself: the body that is spiritually void is like a mirror, reflecting without expressing.

The mirror effect hidden beneath the painting subjects is at times revealed. In The Long Goodbye, the finger(s) cover(s) the lips, the fingernail(s) reflect(s) a scene from afar: footprints go from the beach to the sea, but the swimmer is nowhere to be found under the blue sky and hot sun. A viewer cannot deduce whether the lonely subject is enjoying the nature under water, or is already gone. It suspends between pleasure and anxiety. Regarding deceptions of selfie faces aforementioned-that is, especially in highly suggestive paintings such as the Sunshine at the End of Day-these can also provoke similar ambivalence. Poker faces (the structure of the painting manifests as the personality unfolds) and provocative appearances, teasing both reasons and desires, effectively baffle and bewilder the viewer. These paintings however are always attractive. Calvin's themes is the psychological mechanism triggered by death and eros, a theme with a profound history in Western painting.

Brian Calvin goes back and forth, negotiating and balancing, so that the viewer does not have to be caught in a negative affective situation in which one has to repeatedly examine one's self: he plants visual seeds everywhere and waits for their fruition in the viewer's mind in a very careful way, so much so that his 'trap' seems almost indiscernible. Bright colours almost flatly applied and painterly gestures almost abstract in nature are to be found everywhere in the exhibition, rendering the portraits almost figures from illustrations or cartoons-indeed, Calvin's treatment of the corporeal and the landscape, the organic and the inorganic, is one and the same. Stimulations that go with sex toy-like, alienated expressions are therefore lessened, and the paintings are therefore even, modern and pleasant. The artist de-humanise characters as he depicts them, and de-libidinalise as he writes libidos. He first affirms the distances between himself and surrounding people, issues and matters, and works not through sensations, but scales. Specifically, in the context of the contemporary reality, an alienation brought by a certain bluntness activates his theme. Lineup with its row of profiles reminds one of Egyptian murals, and even the design of the fourth generation Chinese notes. The composition is stable, clear, orderly, and is secretly faithful to collectivity. After all, Brian Calvin works on the most obvious things; and because these are the elephant in the room, people usually cannot be bothered. One day the visible invisible will become a muddy, murky conundrum that asks for solutions.

Sign up to be among the first to know when new exhibitions by Brian Calvin or at Almine Rech open.