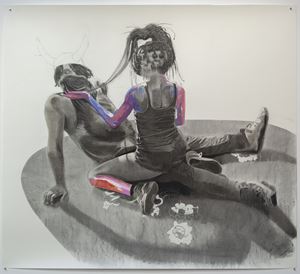 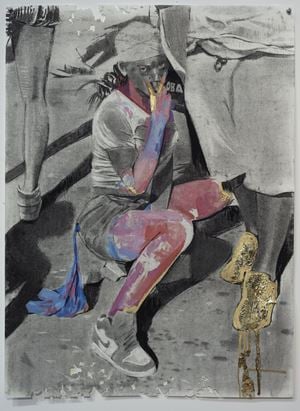 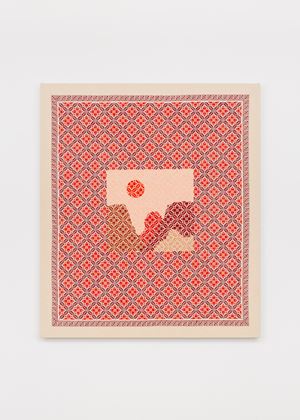 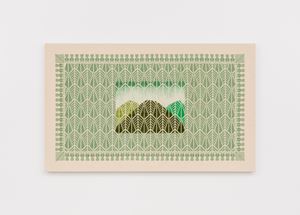 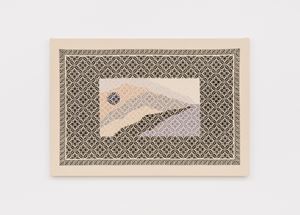 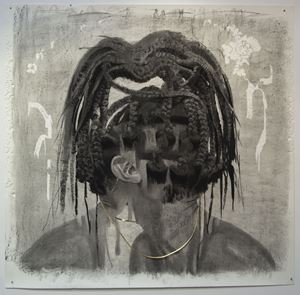 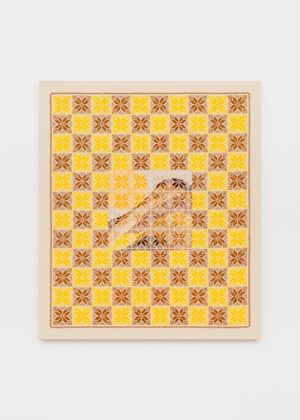 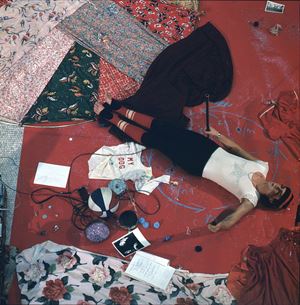 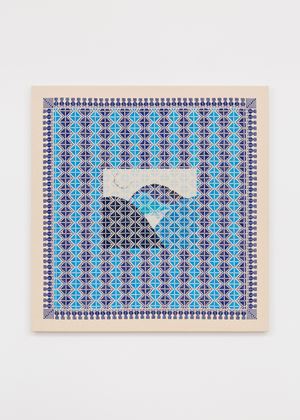 Anat Ebgi is pleased to present works by Jordan Nassar and Cosmo Whyte at Art Basel Miami Beach. Both Nassar and Whyte allow decorative remnants from a colonial history to seep into the aesthetic decisions of their works, allowing the pieces to question and critique identity construction and the representation of colonised and migrant peoples.

The artists follow the trajectory of craft tied to cultural lineages and incorporate these elements in their practice as self-identifying members of diasporas. Nassar's usage of a traditional form of Palestinian embroidery aligns with his practice with the native history of the region. Whyte's works on paper contrast Nassar's by highlighting the syncretic forces of colonisation.

Nassar will present a suite of landscape and geometric patterned works which directly reference embroidery symbology of a group of bereaved Palestinian women he works very closely with in the West Bank. Made in direct collaboration with them, this series comprises of works with large sections made entirely by the women, who leave open windows in the embroidery in which Nassar follows their patterning and aesthetic colour decisions to make his undulating landscapes. This installation presents the dialogue between Nassar's own embroidery and its connection to the site and women of Palestine.

Whyte will present a new series of large-scale drawings and a sculptural installation. The works on paper are created with layers of charcoal depicting black bodies obscured with distortion and excessive limbs. Sections of the paper are cut into Spanish lace patterning, and adorned with gold and pitch black glitter. The compositions are based on photographs the artist took of West Indian Carnival, Jouvert, as it is performed in the diasporic communities of Miami. The sculptural installation entitled The Enigma of Arrival in Four Sections: Carry On is comprised of airplane seats reupholstered in a domestic chintz fabric, the tops of which are draped with Spanish lace. The almost allegorical installation reimagines the tumultuous passage of displaced and migrant peoples.

Anat Ebgi is pleased to present the historic restaging of Tina Girouard's Pinwheel (1977) for the inaugural Meridians sector at Art Basel Miami Beach. In partnership with Lumi Tan (The Kitchen), as Curatorial Producer, the performance will take place each day of the fair December 3-8, 2019.

The near hour-long piece features four performers creating a stage-like environment in four quadrants using silk patterned fabrics. As the action unfolds, each performer incorporates base objects and elements all connected to their given personae of ANIMAL, VEGETABLE, MINERAL, and OTHER. The performers activate the space and enact rituals defined by Girouard's symbolic language according to a detailed set of instructions and diagrams.

The original staging of Pinwheel, which included Girouard acting as both director and performer, made its debut in the Great Hall of the New Orleans Museum of Art in 1977 as part of the exhibition Five From Louisiana, alongside the works of Lynda Benglis, Robert Rauschenberg, Richard Landry, and Keith Sonnier.

Pinwheel is Girouard's grand finale performance of Solomon's Lot, a durational project of nearly a decade centred around several lengths of uncut Japanese silk from the 1940s with interconnected performances, videos, photographs, and both painterly and sculptural installations. Through each new installation or performance Girouard exposed the way the rigid armature of Solomon's Lot allowed for interpretation, ceremony, and the spiritual through performative action.

Girouard's work and legacy finds itself in a unique position at the intersection of several movements. Her works are connected to the post-minimal movement through her close association with 112 Greene Street, but also deeply associated with the Pattern and Decoration movement in New York. Throughout both of these movements her work is strongly intertwined with feminist art history with her consideration of domestic space and the 'women's work' that has become indicative of her practice.

The performance of Pinwheel at Art Basel Miami Beach Meridians is produced in collaboration with Lumi Tan of The Kitchen and generously supported by The Miami Beach EDITION.