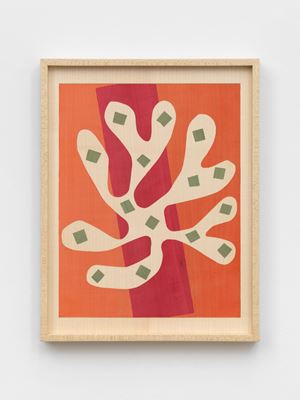 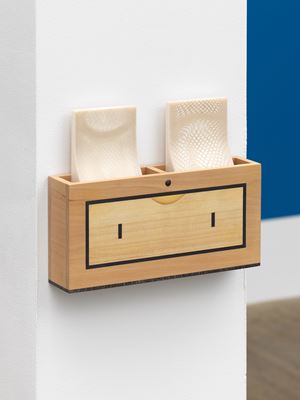 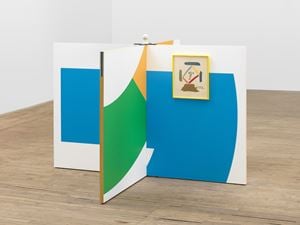 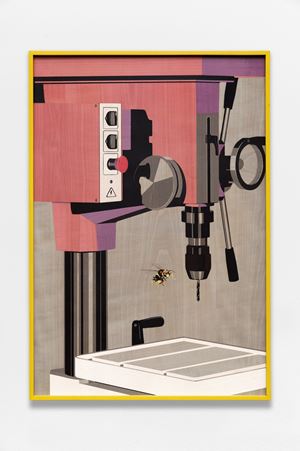 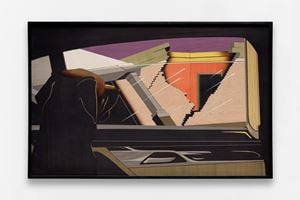 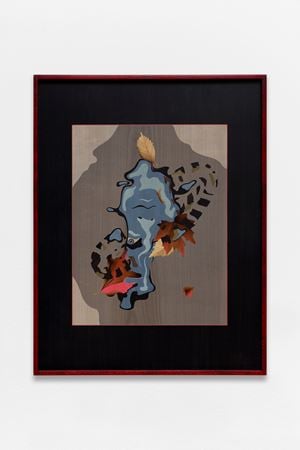 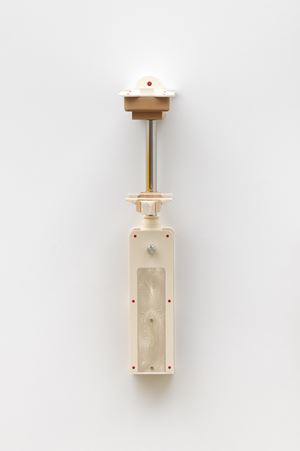 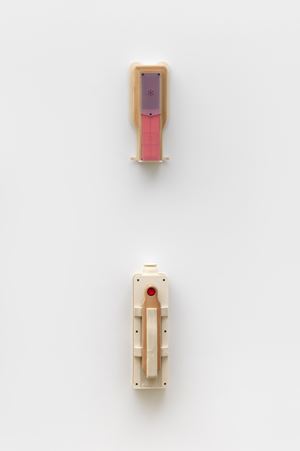 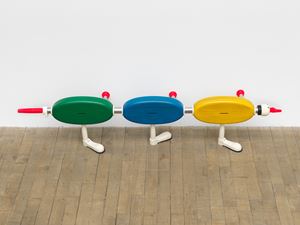 For his exhibition at 55 Walker, Blatrix has installed a wall work depicting a chat robot above the gallery entrance, confronting the viewer with the phrase 'Ask Us Anything.' Referencing the pop-ups that are now ubiquitous to e-commerce, the work adopts the benign tone of corporate interaction. This continues throughout the space as Blatrix has painted one of the gallery walls in bright yellow, green, blue, and red, recalling the palette used in logo design. Above the wallpainting, Blatrix has installed new works from his ongoing series of wood marquetries, which incorporate imagery such as machinery and murder hornets. Rendered meticulously in collaged wood, the works begin to suggest the more sinister implications of the supposedly utopic language adopted in advertisements.

A new sculpture is positioned in the centre of the gallery, composed of interlocking panels, printed with abstracted versions of Starbucks and Google logos, creating four spaces that recall office cubicles. Decorated with a marquetry that appropriates an image by Pablo Picasso, these interior spaces mimic the decorative strategies used to improve a work environment. Positioned behind this installation, two sculptures that function as scanners are installed on the wall–one turned 'off', and one set in an 'on' position that appears to be set to continually scan data, transmitting its recordings to an unknown entity outside the exhibition. As the viewer exits the gallery they encounter a small sculpture with two small emoticons, one happy and one sad, situated as if it should be used to rate their experience.At this point, the viewer returns to the exhibition's initial question: 'Ask Us Anything', wondering if the answer they received was the one they needed.

Camille Blatrix lives and works in Paris. Blatrix's sculptures present themselves as artifacts from a near future, emulating the forms of everyday objects while obscuring their own purpose. Machine-like in their appearance, the surfaces of his works disguise the artist's labour, as each sculpture combines elements that are industrially fabricated with those that are meticulously handcrafted using a variety of traditional techniques, such as wood marquetry. In his practice, Blatrix interjects coded personal and cultural references, allowing seemingly anonymous objects to record fleeting emotions and interactions. In 2020, Blatrix's work was the subject of a solo exhibition titled Standby Mice Station at Kunsthalle Basel, Basel, which will travel to CAC - la synagogue de Delme, Delme, France inSpring 2021. Past solo exhibitions include: Les Barriéres de l'antique, La Verriére, Fondation d'entreprise Hermés, Brussels, 2019, Fortune, Lafayette Anticipations, Paris, 2019,Somewhere Safer, Kunstverein Braunschweig, Braunschweig, Germany, 2018, and Heroes,CCA Wattis Institute for Contemporary Arts, San Francisco, 2016, among others.

Sign up to be among the first to know when new exhibitions by Camille Blatrix or at Andrew Kreps Gallery open.
Sign UpLogin