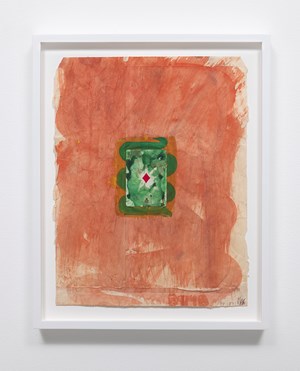 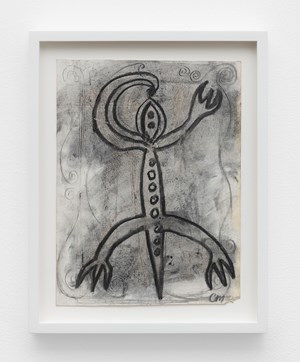 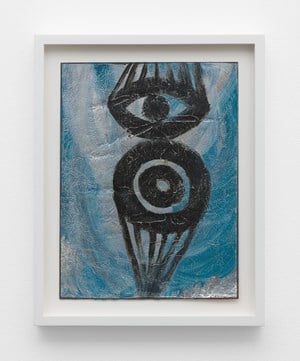 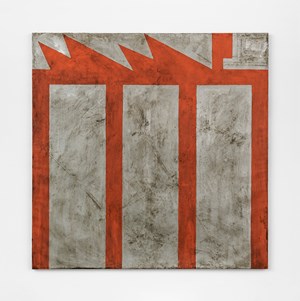 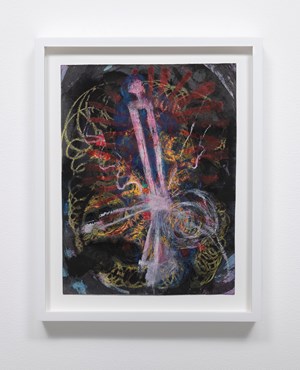 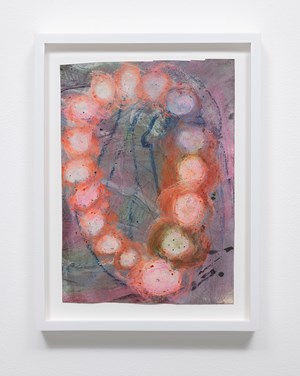 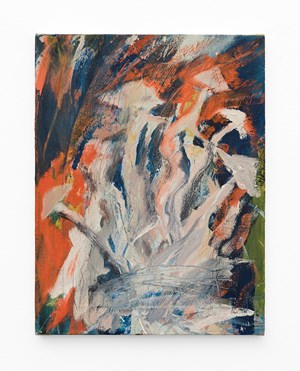 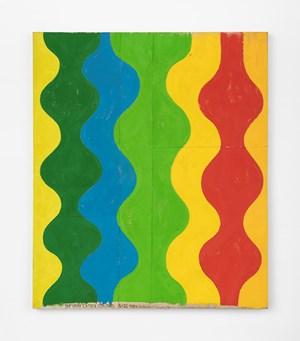 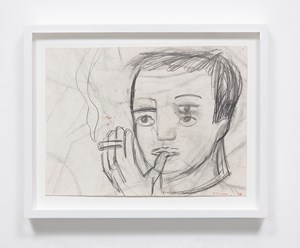 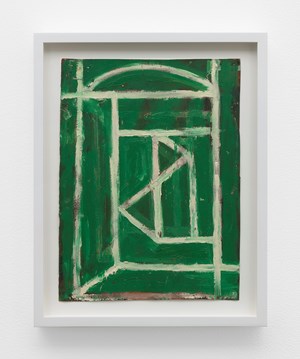 Chris MartinStop trying to get there (You'll never be here unless...), 1986–1987Oil and acrylic on paper
12 x 9 inches David Kordansky Gallery Contact Gallery 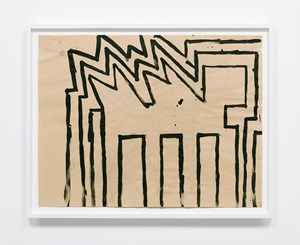 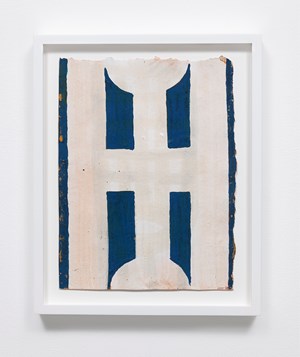 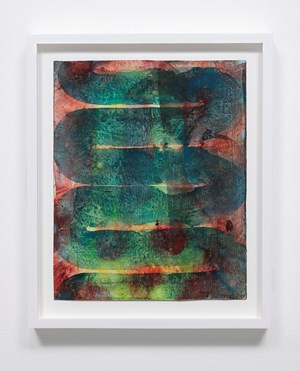 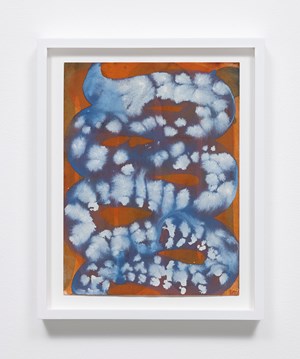 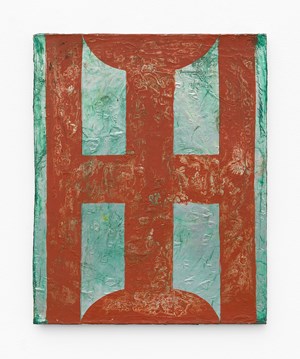 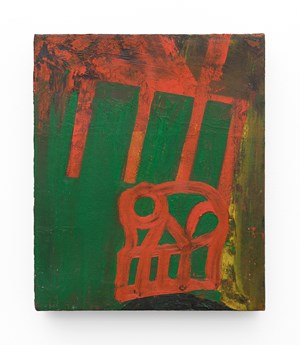 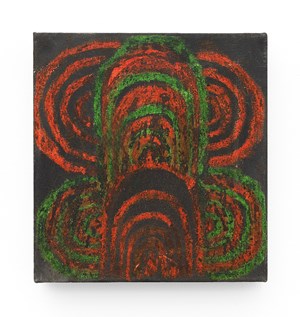 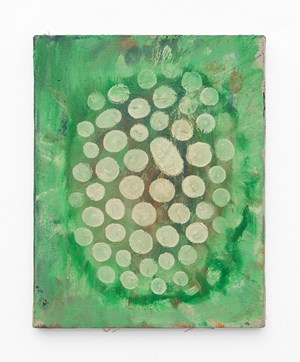 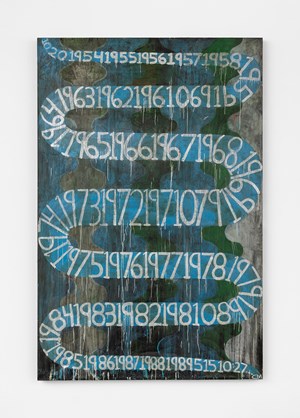 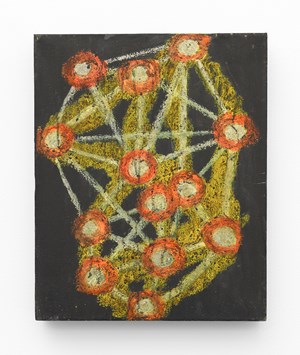 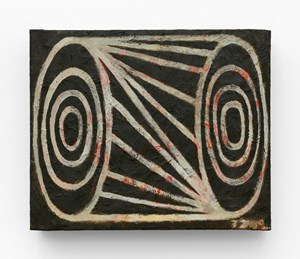 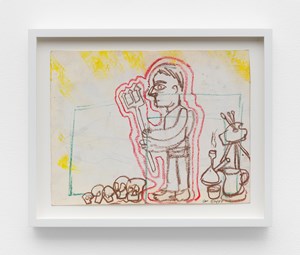 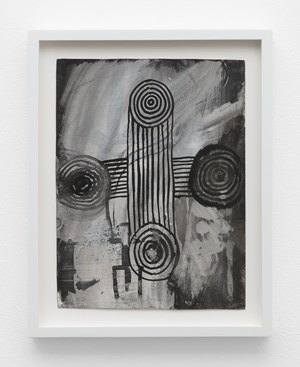 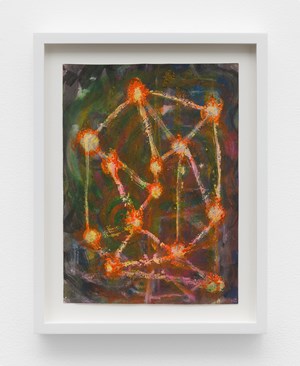 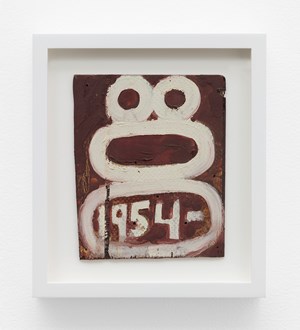 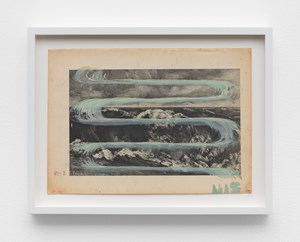 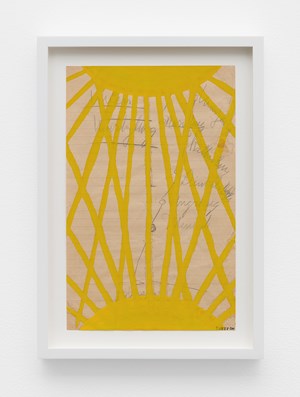 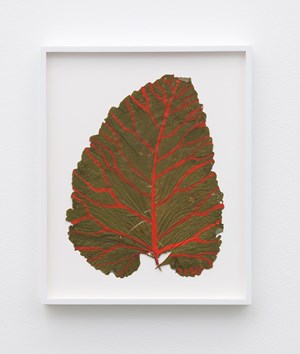 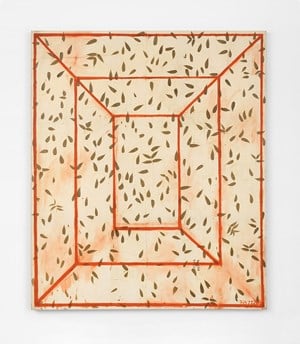 David Kordansky Gallery is pleased to present The Eighties, an exhibition of work from the 1980s by Chris Martin. Featuring both paintings and works on paper, and including many works that have never before been exhibited, the show provides a window into a seminal period in the Brooklyn-based artist's 40-year career.

The Eighties charts Chris Martin's transformation from a painter of slow, heavily worked canvases into a radical figure willing to invite the widest possible range of materials and experiences into the studio. If he entered this period as a strictly abstract painter, he emerged as one who employed abstraction as methodology rather than an end result, and who became increasingly interested in infusing his work with archetypal symbols, found materials, and other vivid remnants of lived experience. Some works are truly composite objects: large-scale paintings constructed from multiple canvases, with their geometric formalism slipping into recognisable imagery.

Appearing throughout the exhibition, for instance, is the stylised image of a griffin. Martin encountered the mythological beast in a dream and then began to recognise its form in the otherwise rectilinear compositions he was painting at the time. Suddenly, abstraction was giving way to a mythological being charged with energy and specific connections both personal and cultural, as the griffin could also be read in relation to other forms and images in the artist's consciousness, including the winged lion emblem of Venice and the ancient Assyrian guardian sculptures installed at the Metropolitan Museum of Art. Another work, meanwhile, features wildly gestural brushstrokes that coalesce in some areas into images of psilocybin mushrooms.

In this expanded version of abstraction, colour took on elemental and autobiographical meanings alike, with red conjuring fire, for instance, and green evoking trees and nature by way of an association with the Catskill Mountains that goes back to his childhood and continues to the present day. (In addition to the space in Williamsburg that he has inhabited since 1985, Martin has long maintained a studio in upstate New York.) The narrative openness that Martin was discovering allowed him to fully embrace his burgeoning obsessions with certain colours and materials. The use of metallic foil becomes a recurring feature in his painting at this time, and serves as both an unorthodox ground for the application of other mediums and an active, reflective component in the visual foreground of the work.

Perhaps even more radically, Martin found that the speed and directness afforded by producing works on paper also translated to the creation of very large-scale canvases; rather than labor more intensely and for longer periods of time as the work grew in size, he allowed himself access to unconscious gestures and the whole scope of natural life forces, developing a quasi-performative, ritualistic process that transformed the studio into a laboratory for experimentation and self-exploration, and that unabashedly welcomed ecstatic states of joy and contemplation. (He would go on to create actual performances in the early 1990s.) Each painting began to take shape in real time as a landscape of the mind, and indeed, Martin has often referred to himself as a landscape painter in the broadest sense.

This ethos was informed in part by interests in Beat literature, Buddhist meditation, psychedelia, and therapeutic modes of artistic expression, but it also arose as a response to the rich confluence of artistic currents that passed through New York during the 1980s, each of which left its mark on Martin's work. Their range is as varied as it is indicative of a defining moment in the development of contemporary art, and the paintings therefore become a forge in which a multiplicity of opposing influences and strains of culture are fused together. These include the exploded cubism and sculptural virtuosity of Elizabeth Murray; the electrifying street-art-based practices of visionaries like Jean-Michel Basquiat and Keith Haring; the cultural scope, biographical intensity, and material experiments of European artists Georg Baselitz, Anselm Kiefer, Sigmar Polke, and Dieter Roth; and the expressivity and sheer energy of Julian Schnabel's Plate Paintings, which seemed to capture the contradictions and potential for wrought beauty inherent to the age.

Simultaneously, Martin and his studio were emerging as a focal point for a younger group of artists, many of whom were based in Brooklyn and were dedicated to creating their own communities and exhibition contexts. The work on view in The Eighties channels this sense of intimacy, even when it assumes heroic scale. It is responsive, generous, and diverse, having emerged from a stylistic position in which nothing is taken for granted and affinities to other artists and forms of cultural expression are openly acknowledged, even celebrated. Some images, colours, and approaches to support and brushwork recur across a number of canvases, constituting what would increasingly become recognisable parts of the artist's vocabulary. But others stand alone: one-off, unrepeatable, they are organic outgrowths of the timeless moment in which Martin conceived and made them.

Sign up to be among the first to know when new exhibitions by Chris Martin or at David Kordansky Gallery open.