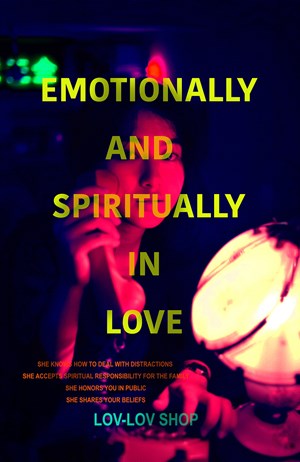 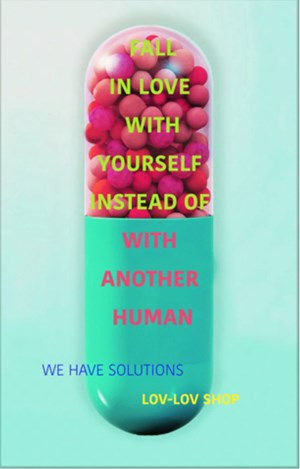 Lin JingjingFall In Love With Yourself Instead of With Another Human, 2019Archival pigment print on canvas
160 x 100 cm de Sarthe Contact Gallery 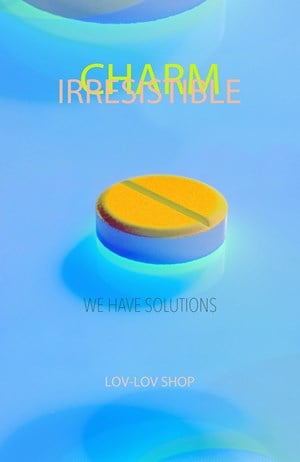 de Sarthe is pleased to announce its fourth solo exhibition for Beijing- and New York-based contemporary artist Lin Jingjing, titled, Lov-Lov Shop. Lov-Lov (2018- ) is an absurd but poetic interdisciplinary project that explores the meaning and significance of humans in the age of artificial intelligence. As humanity pays for our growing greed and never-ending desires, morality is continually challenged and evaded, resulting in our collective ignorance and denial. Lov-Lov Shop opens on May 25 and runs through July 6.

Technological advancement continues unabated under the guise of efficiency and convenience. The new era of Automation Technology – namely artificial intelligience (AI) – is imbued with potential while raising unprecedented concerns. The best chess players in the world are no longer human beings, and Lin's Lov-Lov Shop asks: "What if the best lovers and life partners were also no longer human?" The 6-channel video You Need To Be Careful With Me: I Fall In Love And I Fall In Love Forever (2019) simulates an engaging commercial television advertisement. Using appropriated footage and images from movies and the internet in combination with dynamic commercial language, the artist introduces the audience to an all-new AI lover. While the video resembles a public service announcement, the world it presents appears dystopian. Th seemingly affectionate title is suggestive of a double entendre as the word "forever" may be implying non-human. In Lov-Lov's world, consumers can freely download the appearance, voice, behavior, memory, wisdom, and even humor of any human in history, such that they may maximize their happiness and satisfaction.

Taking over half the space, Lov-Lov Shop (2019) is an advertising campaign that promotes different models of ideal companions using exaggerated catchphrases. Expanding beyond romantic partners, the triptych Unconditional Love and Companionship On Call (2019) showcases a society constructed entirely of AI and customized based on Lov-Lov's data analysis of the user's upbringing and need for relationships and social validation. In this society, humans live unburdened by relationships as the AI takes into account our desires for social harmony, intimacy, and a sense of belonging. AI incorporates these needs into a completely closed and manageable system, eliminating the possibility for unwanted conflict and drama. Through this series, Lin asks desperately: "In a world perfect as such, will humans willingly terminate their relationships with other human beings (and even all other natural life) and live happily ever after in an artificial simulation?"

The absurdity of this notion is amplified in Lin's Lov-Lov pharmacy series We Have Solutions (2019). This corresponding series advertises a medication regime perfect for indolent individuals. If you are too lazy to order an AI companion, all you need is a pill to experience love again and again – it is that simple and easy. Love, trust, friendship, respect, even spirituality, mysteriousness, and confidence – all are attainable, and all you need to do is sit back and enjoy. Is this not the shortcut to altering minds and reality that many long for?

Second To None (2019) is the slogan for Lin's 2020 Presidential Election project, in which she encourages voters to opt for a socially responsible AI president.

Lin's cubic projection installation A New Dawn For America (2019) introduces, for the first time in history, an AI presidential candidate. Cast through five projections atop a single white cube, the video delivers a passionate and detailed speech given by the AI candidate. The candidate tackles the most sensitive and complex of social issues and demonstrates its ability as a future leader with daring vision. While AI surpasses humans in logical reasoning, information processing, and making intelligent decisions, it is also untethered from biological and personality flaws, and incapable of personal scandals and political tyranny. It is the most reliable and trustworthy candidate in terms of fulfilling public service and civil obligations, and it satisfies the selection criteria of most voters.

A neon light installation mirrors the cube. In theory, it is a book written by an AI author, titled, The Human Element And Why We Don't Need It.

Using paradoxical concepts and humorous language, Lin Jingjing comments on the direction of our political, cultural, and social development. Lov-Lov Shop discusses the influence of reality on how we perceive general humanity and the unease we share as a collective. The artist hopes that the pressure of living in the technological era will urge us to reconsider what it means to be human. 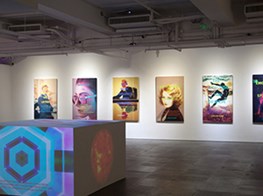 Among today's tech entrepreneurs, there is a widespread fundamental belief that things can be made better, easier, more convenient if consumers adopt the right pieces of technology. Hungry? Tap on your phone's screen and a meal will come to you. Need a ride? Do the same. Swipe right at the suitable instant, and you may end up in happy matrimony.

Sign up to be among the first to know when new exhibitions by Lin Jingjing or at de Sarthe open.