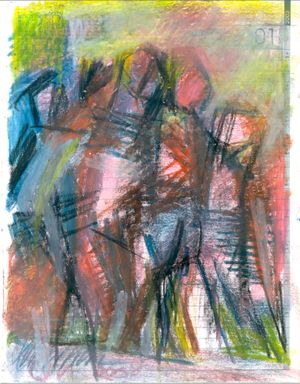 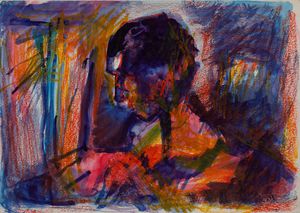 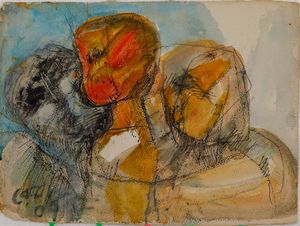 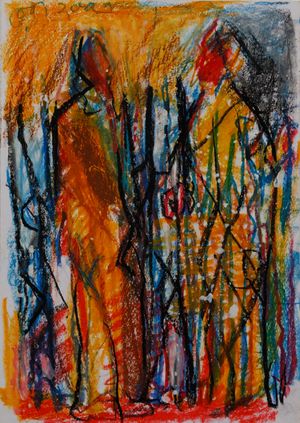 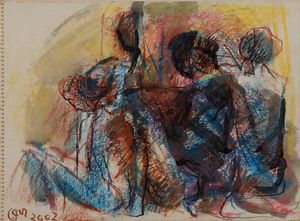 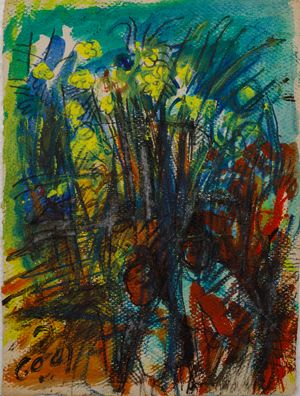 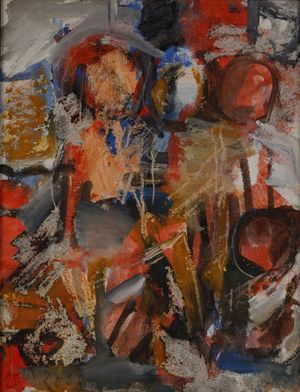 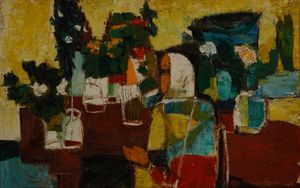 Experimenter presents The Broken Foot Journal and Other Stories bringing together the works of the late painter, sculptor and printmaker Reba Hore (b. 1926 – d. 2008).

Reba Hore's practice is rooted in the dailyness that occupied her field of vision. Frenetic and at times even dizzying, her work was furious yet a strong humanist quality is evident, whether in the painted shadows of the humans in her images or the fragile catharsis in a series of terracotta sculptures on view at the exhibition. The fervent lines of colours in the paintings and works on paper make form, figure and landscape indiscernible, underscoring a form of erasure. Hore's is an expressionistic, powerful practice alluding to a confident embodiment of motion that reveals a gaze from the interiority of an entangled knot of experiences.

Occupying two large spaces in the gallery is the Diary of the Broken Leg, from which the show draws its title. "I drew to forget the pain", is how Reba Hore sums up the genesis of the diaristic work anchoring the exhibition. In 2004, Hore had broken her leg for the third time. The injury had bled profusely, releasing what she recalled a 'flow of colour and pain', and subjecting her to an almost year- long, difficult convalescence.

The diary became a refuge, a space for unabashed expression of thought, vision, form and perhaps even a segue from reality. This extraordinary, yet unseen body of work is composed of drawings in pastel and pen, interspersed with notations and poems, mostly in Bengali. Writer Aveek Sen in his essay on The Broken Foot Journal elaborates, The most remarkable achievement of this journal is to work through — quietly and doggedly, with body and mind — to a visual and verbal language for grasping, yet letting go of, this radically unstable world. But what is never lost in the process is the will to make sense of, and play with, its fugitive and unconsoling truths: "An aged woman totters on/ Shuffling slowly stick in hand/ She stumbles fumbles, moves along/ Peering closely at each stand./ She only knows she has to go/ Where and why she does not know." Each page reveals a visual and verbal language between the mind and the body through franticly colored drawings juxtaposed alongside blank sections of pages.A body of rarely exhibited early oil paintings find themselves interspersed with works on paper that bind Hore's continued immersion in the exploration of human form and space. Alongside, are a series of sculptures in terracotta, whose forms are fully made, yet exude a sense of gestural immediacy and the unmistakable tactility of Hore's hand in each of them. A unique artistic language, that was hers alone, characterised by personal experiences emerges through the solo. Simultaneously, a crucial understanding of humans, animals and nature, not restricted to their mere physical manifestations, but pointing towards a deeper humanist approach, enmeshed with passion, empathy and emotion that defined her life and work, is palpable in the exhibition.

Reba Hore was educated at Calcutta University and Government College of Art & Craft in Kolkata. Hore completed her graduation in Economics and became an active member of the Communist Party in 1948. She lived and worked in Kolkata, New Delhi, and in Santiniketan. Actively involved in politics from a formative age, she took part in the tumultuous student movements in Kolkata in the 1950s and was deeply moved by the human misery she encountered during the Bengal Famine of 1943, an experience that continued to resonated in her practice. Her works reside in several private and public collections in India and abroad. Reba Hore, The Broken Foot Journal and Other Stories is presented by Experimenter in collaboration with The Seagull Foundation for the Arts, Kolkata.

The Broken Foot Journal and Other Stories

Sign up to be among the first to know when new exhibitions by Reba Hore or at Experimenter open.
Sign UpLogin