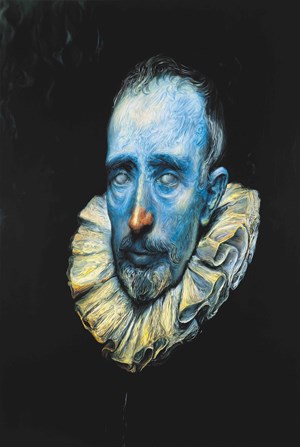 Rembrandt's masterpiece Self-Portrait with Two Circles (c. 1665) will go on view at Gagosian Grosvenor Hill, heralding a new alliance between the international gallery and English Heritage—the charity entrusted with the care of this painting and more than 500,000 other paintings and artefacts, together with more than 400 historic sites across England.

Rembrandt's legendary painting will be the centrepiece of an exhibition of self-portraits that will also include works by Francis Bacon, Jean-Michel Basquiat, Lucian Freud, and Pablo Picasso, as well as leading contemporary artists such as Georg Baselitz, Glenn Brown, Urs Fischer, Damien Hirst, Howard Hodgkin, Giuseppe Penone, Richard Prince, Cindy Sherman, and Rudolf Stingel, among others. A new work created by Jenny Saville in response to Rembrandt's self-portrait will be revealed for the first time. Entry to the exhibition is free.

The partnership between Gagosian and English Heritage, which will be launched with this exhibition, will entail the gallery supporting the charity and its sites, artworks, and artefacts—including Kenwood, the home of Rembrandt's self-portrait in the north of London. To begin, Gagosian will support the conservation of the painting's eighteenth-century wooden frame. Other future events between the two organisations are in the planning stages.

Anna Eavis, Curatorial Director at English Heritage, comments: 'Working with Gagosian will allow us to create exciting juxtapositions between our collections and the gallery's modern and contemporary program. We're delighted to be starting with Rembrandt's Self-Portrait with Two Circles, which usually hangs at Kenwood. It's one of the world's great paintings and, despite its considerable age, a work of extraordinary modernity.'

After Gagosian, Self-Portrait with Two Circles will return to Kenwood. In October of this year, the painting will be the focus of a special new display, timed to coincide with the 350th anniversary of Rembrandt's death.

Painted when Rembrandt was about sixty years of age, Self-Portrait with Two Circles is considered to be the artist's greatest late self-portrait. Rembrandt depicted himself in his studio, wearing a white linen cap and holding his brushes, palette, and maulstick. One of his largest and most ambitious self-portraits, the painting has prompted much speculative interpretation about aspects such as the enigma of the circles in the background that inform the title. Confident and masterful, brooding and anxious, Self-Portrait with Two Circles is a masterpiece of compelling ambiguity. Edward Cecil Guinness, the first Earl of Iveagh, purchased the painting in 1888; later he gave it to the British nation, along with sixty-two other exceptional paintings and the Kenwood Estate. Since 1986, Kenwood and its collections have been in the care of English Heritage. In accordance with the Iveagh Bequest, Kenwood is open and free to the public.

The exhibition will be accompanied by a fully illustrated catalogue, with a text by David Freedberg.

English Heritage cares for more than 400 historic buildings, monuments, and sites—including world-famous prehistoric sites, grand medieval castles, Roman forts on the edge of the empire, and a Cold War bunker. Through these, history is brought to life for over ten million people each year. Registered charity no. 1140351.

Visions of the Self: Rembrandt and Now

3 new artworks have recently been added by Gagosian.
Sign up now to be among the first to know when new artworks are added.