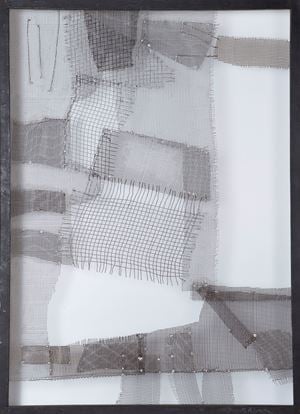 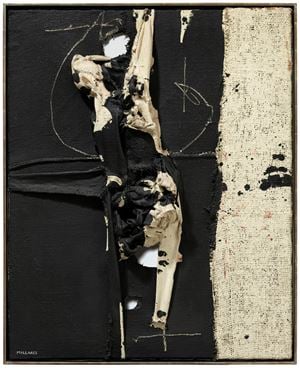 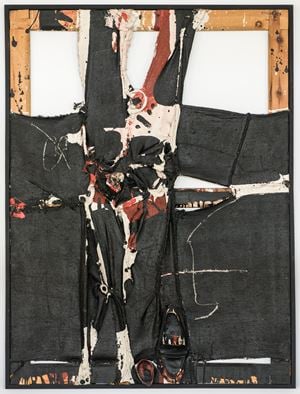 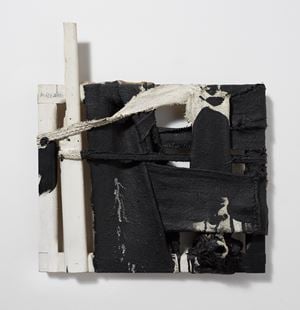 Mayoral presents an unprecedented and topical dialogue between Manuel Rivera and Manolo Millares. The show, curated by Carles Guerra, brings together 10 works produced between 1957 and 1972, highlighting the connections and unique characteristics of these two great postwar artists who expanded the limits of the painting beyond two-dimensionality.

There are numerous links between Manuel Rivera (Granada, 1927 – Madrid, 1995) and Manolo Millares (Las Palmas de Gran Canaria, 1926- Madrid, 1972), going from the aesthetic and political aspect to their artistic and professional career. Following the ideal of El Paso, a group of which they were both cofounders in 1957—together with other artists such as Rafael Canogar and Juana Francés, to which we recently dedicated two monographic exhibitions—, their works seek the realization of 'revolutionary fine arts' which started from the poetics of abstraction to express their discontent with the reality of the postwar period and of the Franco dictatorship that they had to endure. The creations of Rivera and Millares shared a uniqueness which granted them a genuine, differentiated modernity, thanks to the use of unusual materials in the world of art: wire mesh and wire, in the case of Rivera, and the burlap of Millares. The use of these materials involved the development of original, non-pictorial techniques, similar to those of artisan weavers: with yarn and wire, Millares and Rivera combined, respectively, the fragments of burlap and of wire mesh. With this sort of reparative act, close to closing a wound with stitches, both artists embarked on a 'healing' process, a metaphor for release from the forces of evil.

The use of these industrial materials—close to ready-made—and the way in which they worked on them meant that their works allowed you to see the wall on which they were displayed, as observed in some of the pieces brought together in this exhibition, among which we can highlight Composición 8 (Composition 8) (1957), by Manuel Rivera, and Cuadro 186 (Painting 186) (1962), by Manolo Millares. As Carles Guerra points out in his text for the catalogue, awareness of this fact led them both to hang the creations further away from the wall than what tends to be usual, thus avouring the appearance of shadows of different intensities on the wall and, consequently, incorporating the empty space into the painting itself. In this way, the works spread beyond the frame and the traditional two-dimensionality of the pictorial surface.

Guerra compares this way of creating with the works of two of the most emblematic artists of postwar art in Italy: Burri's sacks and Lucio Fontana's Concetti Spaziale (Spatial Concepts). As occurred with these Italian artists, the gestural brushstroke typical of the different abstractions of the time was replaced in Rivera and Millares with direct work with the medium itself, meaning that 'the relationship between figure and background [is] cancelled for the benefit of the medium. The prominence of the medium increasingly allows them to free themselves from the legacy of canonical gestures'. The curator continues by saying that we are faced with 'a new type of painting, one which he even doubts can continue to be called painting. [...] This debate could be extended to the "specific objects" of Donald Judd who, by the way, wrote a critical note starting from the works of Rivera and Millares displayed in 1960 in the Pierre Matisse Gallery of New York'.

This sculptural character was emphasised in their next works: in the case of Rivera, as observed in Metamorfosis (Máscara) (Metamorphosis [Mask]) (1961), this occurred through the introduction of a metal or wooden base on which the artist mounted his experimentations in wire mesh and yarn. As for Millares, the three-dimensionality was stressed by the introduction of fragments of objects, as occurs in Objeto (Object) (c. 1963), or with some folds of clothing even more full of lumps, such as those that we find in some of the exhibited works.

In the context of a Spain in which all freedom of expression had been repressed, our artists found, in these object-paintings, a way to create an apparently inoffensive art in the eyes of the Spanish authorities, who 'were incapable of appreciating metaphor and poetry', as noted by Alfonso de la Torre, the critic and specialist in Rivera and Millares. At the same time, these creations revealed great critical strength when shown outside Spain, in juxtaposition with the exponents of art informel, arte povera or abstract Expressionism, in the context of the major international group exhibitions of the end of the 50s and beginning of the 1960s.

Thus, in shows such as the IV Bienal do Museu de Arte Moderna de São Paulo (1957); the mythical 1958 Biennale di Venezia or New Spanish Painting and Sculpture, held in the MoMA of New York in 1960, Rivera and Millares succeeded in giving visibility to a 'critical Spanishness' which fled the artistic instrumentalization of the Franco regime for the creation of a 'Spanish art' and in coming to the attention of two of the most important gallerists of the time: Daniel Cordier and Pierre Matisse. Through their galleries in Paris and New York, the works of these two artists became consolidated internationally and entered numerous public and private collections worldwide.

It is as if the tears, the darning, the stitching and the wires –all these terms being interchangeable between the works of Millares and Rivera– were the sublimated gestures of this violence inflicted on civil society.
– Carles Guerra, Curator of the exhibition

Sign up to be among the first to know when new exhibitions by Manolo Millares, Manuel Rivera or at Galeria Mayoral open.