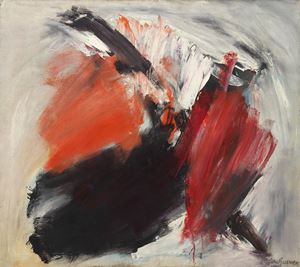 Mayoral presents José Guerrero. The USA Influence, a monographic exhibition on the artist from Granada which shows the role played by his experience in the United States and, above all the time spent in New York, in the development and consolidation of his work. Curated by Juan Manuel Bonet, it brings together eleven paintings created during a key period in his artistic career, from 1959 to 1967.

'It is here that my paintings begin to cry out; it is here where restlessness turns into paintings in which the paint and the anxiety open up a path for me.'1 This is how José Guerrero often explained what it meant for him to emigrate to the United States and, more specifically, to New York City.

This exhibition displays the work of an already consolidated Guerrero, fully integrated in the artistic circles of the States, accustomed to the modernity of its postwar society, characterised by a feeling of freedom and by the rise of individuality, completely opposed to that of Franco's Spain from which he came. This is why, as Juan Manuel Bonet states in his text for the exhibition catalogue, the artist from Granada became 'a bridge between two worlds'.

The curator points out that 1958 was Guerrero's 'great American year'. In addition to receiving one of the prestigious grants of the Foundation for Advanced Studies in Fine Arts of Chicago and to being selected to participate in an event as important as The 1958 Pittsburgh International Exhibition of Contemporary Painting, it was also the year in which he be-came consolidated as an artist of American abstract expressionism since, from then on, his works began to have a regular presence in the group exhibitions linked to this movement which took place in several locations of the United States and abroad—one of the most noteworthy, during that same year, being Action Painting, held in the Dallas Museum of Contemporary Arts.

It was also an important moment from a stylistic viewpoint. The works presented in the display entitled The Presence of Black, held at the Betty Parsons gallery in 1958, were free from all biomorphic references and demonstrated the predominance of gestural abstraction indebted to the action painting of the New York School. As announced in the title, the pieces in that exhibition showed a series of coloured pictorial surfaces in dialogue with black shapes and strokes in the style of those which can be seen in our current show, such as, for example, the work Black and Yellow (1959), which was displayed in that same New York gallery in 1960. Indeed, the works from the end of the 50s and beginning of the 60s were strongly influenced by two of the artists that Guerrero had had the occasion to meet at that time in the inaugurations and meetings of the Cedar Bar and The Club: Robert Motherwell and Franz Kline. Apart from his direct link to them through their shared use of the colour black (although for slightly different creative purposes), the references to Motherwell—one of the most important names in abstract expressionism who had been a reference for the painter from Granada since the beginning of the 50s—can be clearly seen in the trend toward round shapes and the use of large coloured surfaces, which can be observed so well in Untitled (1961), Blue and Black (1962) and Rojo y negro (Red and Black) (1964–1986), the last of which was displayed in the Museum of Fine Arts of Houston in 1964. On the other hand, the impact of Franz Kline—who Guerrero met, precisely in 1958—is clear in the gestures of long, thick and vibrant brushstrokes which cross some of his paintings, such as for example The Followers (c. 1960) or El paño de Verónica (The Veil of Veronica) (c. 1966), and, in some cases, such as Cruce (Crossing) (1962–1963), may also recall Willem de Kooning.

In one of the writings conserved in the Archivo José Guerrero, which is reproduced in the catalogue, the artist discusses Rothko's revealing visit to his first exhibition at the Betty Parsons Gallery in 1954. The encounter was decisive in his abandonment of experimentation with the techniques of architectural painting and in his exploration of what he considered to be 'pure painting', as can be seen in the artist's unpublished manuscript 'New York', that we are presenting in the document display case of this show. From then until 1963, Betty Parsons, marchand for figures such as Barnett Newman, Jackson Pollock, Mark Rothko and Clifford Still, regularly displayed his works, in both group and solo exhibitions. 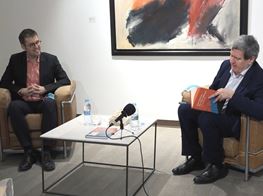 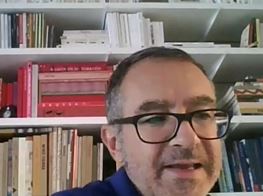 For the 2020 edition of the Barcelona Gallery Weekend, Mayoral invited Francisco Baena Díaz, director of the José Guerrero Center in Granada, to talk about the exhibition José Guerrero: The Influence of the USA in Barcelona. Streaming broadcast Zoom & FB Live.

Sign up to be among the first to know when new exhibitions by José Guerrero or at Galeria Mayoral open.