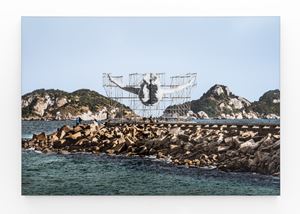 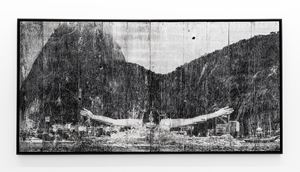 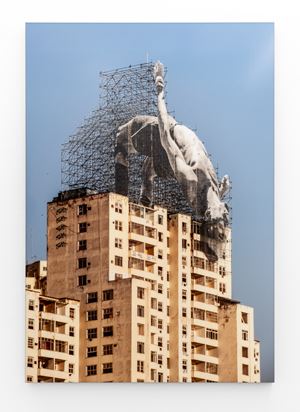 It is with great pleasure that Galeria Nara Roesler presents JR: Patamar, the first solo show by the renowned French artist in Brazil. The exhibition, opening on November 21 at the gallery in Rio de Janeiro, features works that deal with the global issue of migration flows. The artist is also celebrating the 10th anniversary of Casa Amarela, a cultural space conceived and founded by JR in 2009, in the carioca neighbourhood of Morro da Providência.

Known mainly for his large-scale urban art projects, JR has spread his art on buildings in the French banlieues, walls in the Middle East, bridges and trains in Africa and favelas in Brazil. His practice creates connections and brings people together in places affected by conflict or social vulnerability, blurring the frontiers between art actors and spectators.

In the artist’s own words, Patamar refers to 'the moment when things change and people are about to take the next step'. The concept behind the exhibition title, which in Portuguese evokes the idea of an entrance or threshold, encompasses all the artworks that make up the show, as we can see in the brand-new pieces specially commissioned for the gallery. These are wooden rows, onto which photographic prints are applied, in typical JR style. As a tool to move people from one place to another, the rows evoke the displacement of migrants and symbolise a step towards a new life.

The exhibition expands on the series 'Giants', produced by JR in Rio de Janeiro in 2016, during the Olympic Games. Here, the artist portrayed migrant athletes, creating giant sculptures with scaffolding, which showcased athletic moving bodies inserted into the urban landscape.

The relationship between the city of Rio de Janeiro and JR is not something new. It began in 2008 in Morro da Providência, with the project Women are Heroes, which began the previous year in Africa. The French artist was attracted to the favela in Rio de Janeiro by the internationally notorious story of three local young men who were kidnapped by the military police and handed as trophies to the drug dealers of the rival favela, where they were tortured and killed.

As part of the project Women are Heroes, JR covered a large portion of the favela’s façades and walls with large-scale images of the eyes and faces of local women who were in some way connected to the murdered youths, including their mothers and grandmothers. All of a sudden, the gaze of these women could be seen from the wealthier neighbourhoods meaning Morro da Providência hit the news for something other than misery and violence. The community not only gained a face but a voice. 'The city saw the area as a violent place, the dwellers were seen as monsters. The power of art is to change the perception of things. It does not provide answers, but it generates lots of questions', said the artist in El País in 2017.

In 2009, with the help of photographer and historian Mauricio Hora, JR created Casa Amarela, a cultural space on top of the hill where Morro da Providência is located. The site offers English, art, music and reading lessons for local children. The initiative, which is marking its 10 years anniversary, has benefited from the engagement of several artists: its façade is covered by an installation by artists Takao Shiraishi and Diirby, as well as paintings from OSGEMEOS. In 2017, Lua [moon, in Portuguese]–a new space dedicated to art residencies and community workshops–was built on the roof of the house as a symbol of Casa Amarela’s mission: to help dwellers reach the moon.

Sign up to be among the first to know when new exhibitions by JR or at Galeria Nara Roesler open.
Sign Up