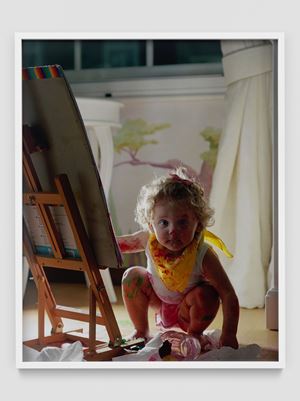 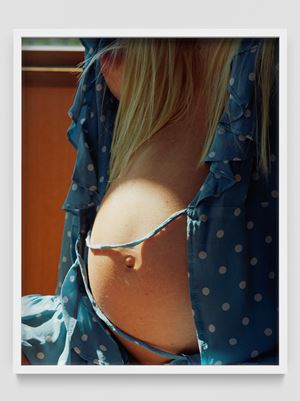 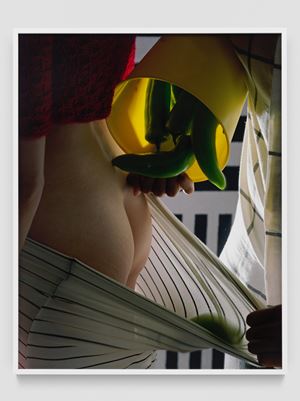 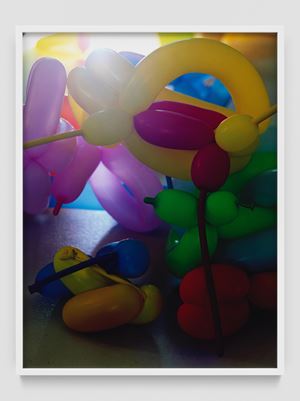 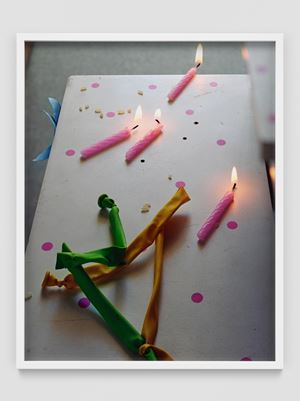 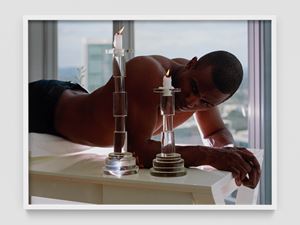 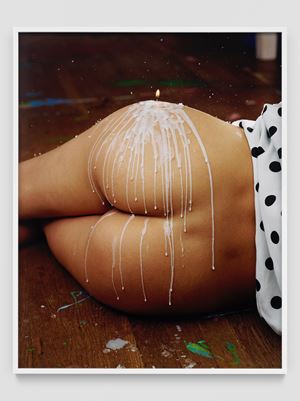 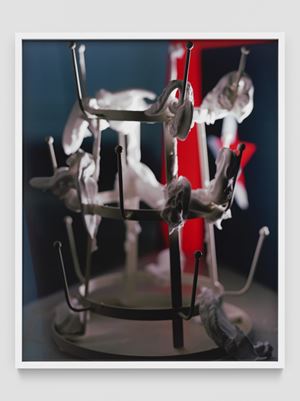 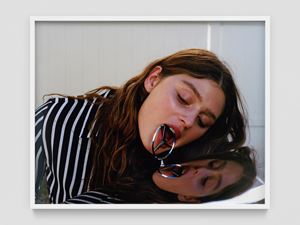 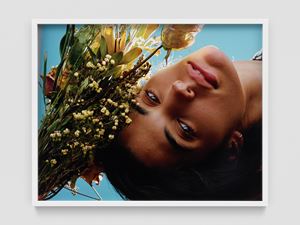 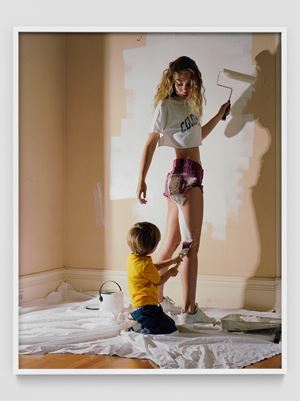 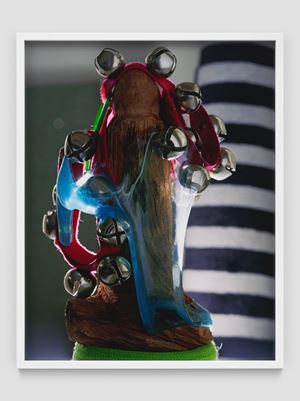 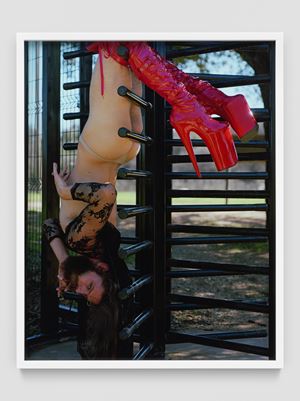 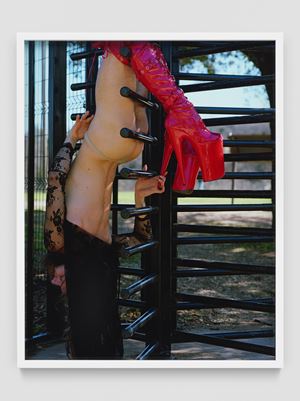 Galerie Eva Presenhuber is pleased to present More Than Tongue Can Tell, the gallery’s third solo exhibition with the Norwegian artist Torbjørn Rødland.

Sunlight touches a pregnant woman’s stomach, a ribbon from her blouse coils over it like an umbilical cord. A toddler at an easel looks at us, almost like a paintbrush-wielding putto in a Renaissance painting. A young woman leans over the hood of a Mercedes and lasciviously licks its star-shaped hood ornament, the car’s glossy finish reflecting her face—the Greek myth inevitably comes to mind: Narcissus admiring his own reflection in the water before drowning in it.

Many of Rødland’s photographs evoke hallowed motifs from art history: their composition and use of light, candles, and naked bodies have a theatricality that is reminiscent of Caravaggio’s chiaroscuro and his realistic depictions of biblical tales. At the same time, however, Rødland’s images are also poppy, sweet, sexual—these ambiguous, immaculate photographs possess the same aesthetic pull as advertising, juggling the stimuli of bodies, consumption, and artificiality, and thus seductively capturing the narcissism of our era.

The psychological, surreal undertone of his work enables the most variegated associations, all of which Rødland leaves to the viewer. Still, he does also keep alluding to what we might call 'Hollyweird,' that candy-coloured dream factory of his adopted home of Los Angeles, a key site in our contemporary mythology, whose absurdity and gloom is also a central subject of filmmakers and multimedia artists such as David Lynch and Paul McCarthy. Like their work, native Norwegian Rødland’s art is rife with mysterious symbols. In contrast to the conceptually ironic distance that has become widespread in photography over the past 40 years, with Rødland the medium takes on a haunting, deeply artistic quality. Emotions, puzzles, and story fragments are just as important to him as dealing with the inherent characteristics of photography as an art form. More Than Tongue Can Tell brings this approach to a head through a loose narrative, into which the viewer is immersed as if into their own subconscious.

'Like a Renaissance putto, the painting toddler in Allegory of Painting no. 2 embodies the creation, joy, and exploration of infancy,' Rødland says. 'I always look to what painters do, while pushing for photography to constitute equally complex and layered visual expressions of—and statements for—our time. Photography is no longer a young medium. Like painting, it can help us empower the past and reconnect with the archaic, the living mystery.'

It is this poetic and also melancholy notion that is palpable throughout Rødland’s work despite all its colourful frivolity. His new film Elegy for the Silent particularly highlights this: an old man looks out at a world that has become alien to him. His values are no longer valid and allusions to Hemingway, emblematic of a romantic vision of writerly masculinity, seem to no longer be either. The camera calmly and slowly takes us across a manicured garden, past pink 1950s limousines, all the way to a beach nibbled by waves. Imbued with the rich glow of natural light so typical of Rødland’s imagery, giving it a cinematic air, the story appears like a dream, without beginning or end. Just like his photographs, there is nothing ordinary about the film—instead, the clear colours pose a curious contradiction to the story’s nostalgia. Rødland takes in his protagonist’s decaying world impartially. Uninterested in direct political messages, he rather searches the past for the core of truth that is lurking just offstage.

Rødland also pursues this approach in his photographs. They have a timeless aspect, and not just because of their classical compositions or links to mythological themes; they really are somehow removed from photography’s intrinsic 'here and now.' Although they were not created as a series, his photos often exhibit formal similarities deliberately staged by Rødland, visually interweaving objects and events in an offbeat fashion, like loose scraps of memory threaded together. The foam-covered bottle rack, which gives the iconic Duchamp an erotic charge, thus goes with the full-height metal turnstile from which a bearded figure in knee-high red platform boots alluringly dangles upside down. The turnstile’s rows of bars are in turn reflected in the striped sweater of the woman tonguing the Mercedes‘ star. Sex and religion, tenderness and vulgarity, art and pop culture, intuition and intellect: they all commingle in Rødland’s work. Together, they create a world in which photography manages that which art is at its best: a game involving imagination, memory, and association that better captures our time than any other form of documentation.

Torbjørn Rødland was born in 1970 in Stavanger, NO, and lives and works in Los Angeles, CA, US, and Oslo, NO. Rødland will be the subject of a solo exhibition titled Bible Eye at The Contemporary Austin, Austin, TX, US, from January 23 to August 15, 2021. Recent institutional presentations include the traveling solo exhibitions Fifth Honeymoon at Museum of Contemporary Art Kiasma, Helsinki, FI (2019), Bonnier Konsthall, Stockholm, SE (2018), and Bergen Kunsthall, Bergen, NO (2018); and The Touch That Made You at Fondazione Prada, Milan, IT (2018) and Serpentine Sackler Gallery, London, UK (2017). Further solo exhibitions have taken place at Henie-Onstad Kunstsenter, Oslo, NO (2015); Kunsthall Stavanger, Stavanger, NO (2014); Hiroshima City Museum of Contemporary Art, Hiroshima, JP (2010); Contemporary Art Museum St. Louis, St. Louis, MO, US (2010); and MoMA PS1, New York, NY, US (2006).

More Than Tongue Can Tell

Sign up to be among the first to know when new exhibitions by Torbjørn Rødland or at Galerie Eva Presenhuber open.