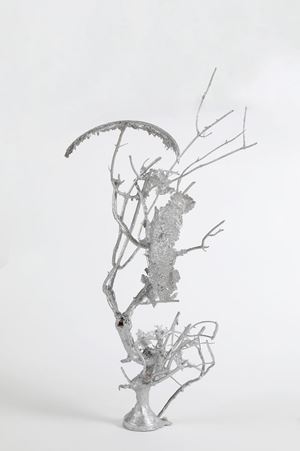 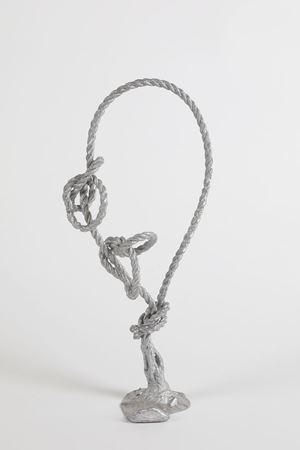 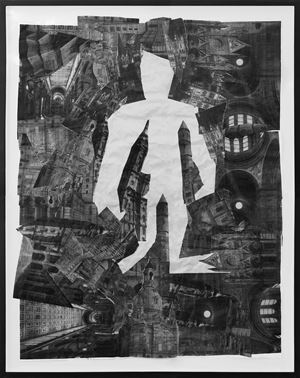 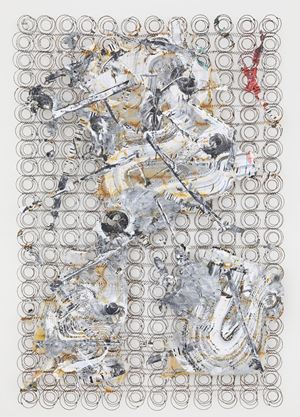 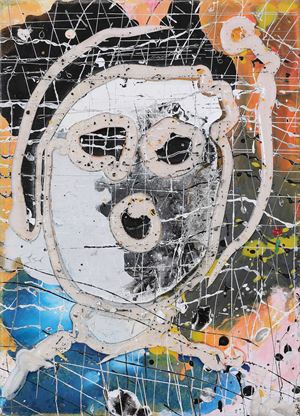 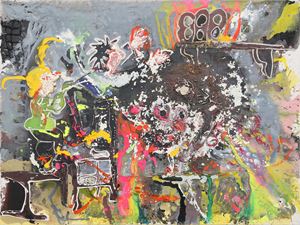 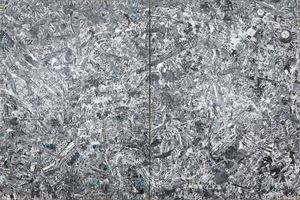 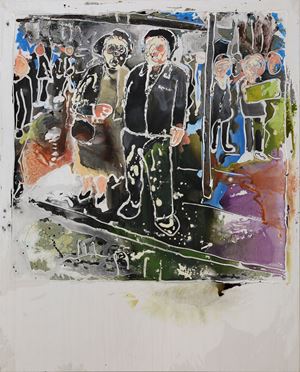 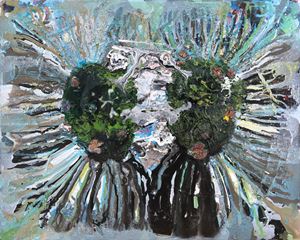 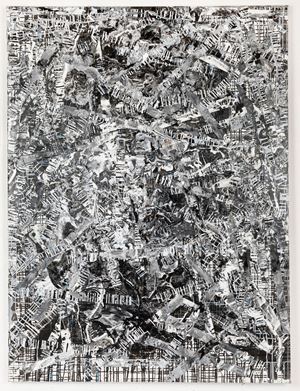 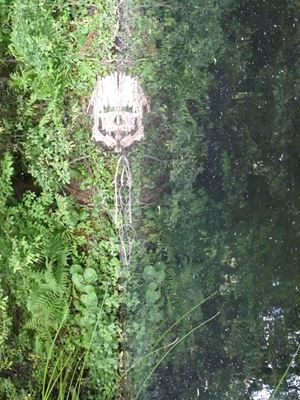 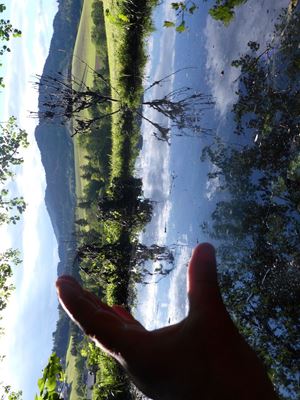 SEHN SIE TIEF 9975-15432-32718 is Christian Eisenberger's most comprehensive exhibition to date at the Galerie Krinzinger. For the first time Eisenberger is working with all rooms of the gallery, linking his painting with land art photographs, sculptures and situative installations.

Sehn sie fief–look deep–sensitively, according to a German dictionary this means slightly irritable, overly sensitive, FEINNERVIG. This certainly is true of some, if not most, people (animals, plants, organisms...) and not just of artists or the way some of your artwork is described. In any case, feeling is very important in the search for an artistic expression, it begins with a small TRIEB and then gradually grows into a mature trunk STAMM. Yet at the outset you never know how strong something you have begun will ultimately become. The motif of the invitation card is based on paradox, the hunter becomes what is hunted, the Schnitzel ??? fires back, etc.... the black target ZIELSCHEIBE can also be compared to the 'expanded' art-criticism pupil PUPILLE. It looks as if, it is thus what it is.

9975-15432-32718 People are increasingly measure with figures in all areas. Thus it would be VERMESSEN to not show this in the title. The first number measures the number of cardboard figures. The second is the number of the artist's days of life at the beginning of the exhibition on November 6. The third refers to the sketches and drawings of any kind in the A4 norm size that are soldered EINGESCHWEISST sealed in steel scaffoldings. And thus only visible as sediment on the edge.

What we see is a first-time juxtaposition of two completely different picture composition techniques. One is a rather time-consuming technique in which countless layers of paint require continuous phases of drying and so it often takes months, if there are not longer intervals that crop up, even years for the pictures to be completed. These seemingly pictogram-like pictures are composed of fragments that emerged in other pictorial processes or were left over. Since about 2014 these 'flat' paintings have emerged without any sign of a brush stroke. This might also be the result of a position of rejecting traditional typologies.

The figurative silicon paintings had a pause of more than 10 years, and given a change of studios this series VERSICKERTE. But this year in the summer I hit upon these abruptly terminated silicon portraits, as a sort of return. And after years of concentrating on one thing it was a rupture again, a new beginning or a continuation of an uncompleted evolution of pictures. In these painting sanitary silicon functions as a dam which is supposed to delimit as well as control the colour fields in directions and spaces. Usually, though, this endeavour fails and there is a deluge of paint, usually in the central field of the painting. Coloration vs. line.

Man usually sleeps on mattresses and paint on canvases. In the FEDERKERN box spring paintings it's the other way round, there paint is bound to the bed apparatus. Nighty night. The canvas is absent, the mattress suspended, as is the paint.

The collages were created on the basis of photographs of old Central European churches and cathedrals that were reproduced. With this juxtaposition of varius different power and belief architectures an absolute extraterrestrial formation is created. These formations grow from the centre to the ouside, next to them there are the contrasting collages that grow from the center to the inside where they form the silhouette of a person. The architecture as it were, creating man, who however is absent. See Quarantine (....)

The photographic series from nature with never shown head reflections and the ZAPFEN chessboard with thousands of ZAPFEN in the woods. The light-dark effect results just from the positioning of the various ZAPFEN. Magic is absent. The next train will come for sure, but it can outdo the life LEBENSDAUER of the chessboard.

The objects and installations will be kept spontaneous and surprising, up to the last moment, because otherwise it would be conceptual art.'–Christian Eisenberger

Time and again Christian Eisenberger's works address socially relevant themes such as 'man and nature' or 'life and death'. But the mechanisms of the art market and they it deals with artists and their work are also a genuine part of his reflection. (...) The MITSCHWINGENDE seriousness of Eisenberger's production is, however, often subverted by humor and a sometimes LAPIDAR pictorial idiom. (...) His works are marked by a sense of being DAHINGEWORFEN, SCHNODDRIG, roughness; the energy of speed and spontaneity can be found here, but also a certain fragility and process-like character. (Taken from the exhibition text, Christian Eisenberger, COLA BIER ENTE HERR TEE 9975-15413-32682, Kunsthalle Giessen, 2020 by Dr. Nadia Ismail, director, Kunsthalle Giessen)

'Christian Eisenberger is well-versed with the art games of modernism and also taps into its tool box: from Pollok, Goldsworthy to process/gestural painting and bad painting. Working in a multimedia and interdisciplinary way, blurring the lines between Street Art, Land Art, an expanded notion of painting/sculpture, autonomous and socially relevant art, etc., he instinctively responds to the end of modernism. He is consistent KONSEQUENT in making use of the new free spaces of postmodernism 'where no norms are in effect-' (Quote Eisenberger) Yet it must be said that the norms of modernism, are, highly officially, no longer in effect. But they are still the most important point of reference and orientation of today's art practice–be it as REIBBÄUME, antipodes or nostalgic reminiscence. Even for Christian Eisenberger! How Eisenberger stands out from the mainstream: apart from excessively lived multimediality and interdisciplinarity, ultimately there are still the hallmarks of postmodernism, most notably: 'strong current instead of GLEICHSTROM' (of the artist's own artistic aspirations)in the sense of spontaneity, intensity, certainly also quantity = quality!'–Edelbert Köb, curator, Vienna.

Sign up to be among the first to know when new exhibitions by Christian Eisenberger or at Galerie Krinzinger open.
Sign UpLogin