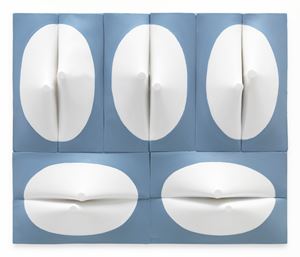 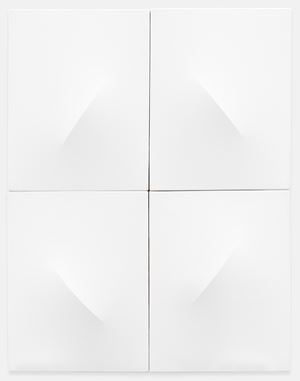 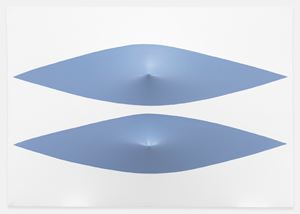 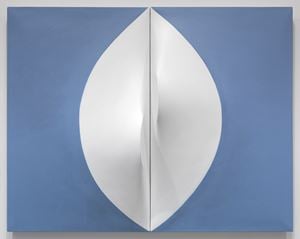 Galerie Lelong & Co. is pleased to present Eros, its second solo exhibition of Cuban artist Zilia Sánchez, timed to coincide with the artist’s first retrospective at El Museo del Barrio. Recalling the Greek god of love, the exhibition title encapsulates Sánchez’s uniquely sensual, corporeal approach to abstraction, most familiar from her shaped canvas paintings. While the museum show will survey the artist’s vast oeuvre spanning more than six decades, Eros focuses on about a dozen new and recent works, highlighting Sánchez’s evolving interest in completely free-standing work and includes her first-ever sculptures in marble and bronze.

During a return trip to Cuba from her travels abroad in the 1950s, Sánchez witnessed a bedsheet that had been hung out to dry form a taut shape as the wind blew it against a pipe or tube. This passing scene affectively became the catalyst for a staggering six decades of work thereafter. Sánchez achieves crescent-like curvatures and anatomical protrusions by stretching canvas over hand-moulded wooden armatures before finally applying acrylic paint. Her resulting works imbue painting with sculptural and architectural sensitivity.

After feeling alienated from the New York art world during of the 1960’s, Sánchez eventually settled in San Juan, Puerto Rico in 1971. She explained, 'I was searching for a warmer place, something more like my own country.' It was there that she forged her first public work, Mural in Cement (1971), on the building façade of Laguna Gardens. Nearly fifty years later, Sánchez continues to make work in the same studio, which was rebuilt after Hurricane Maria. Among the works on view in Eros are a number that were saved from the devastation. Several feature deep, saturated blues that surround white peaks evocative of island terrain. Landscape, topology, and cosmology, remain central to her practice.

The exhibition also features new sculptures fully realised for the first time, which previously existed only as maquettes. Even when formed from precious metal and stone, the works retain a quality present in her paintings that Vesela Sretenovic, senior curator at The Phillips Collection, describes as: 'implying not only a spatial depth but a pulse of life, a living body.' The central work that leant its name to the show, Eros (1976/1998) is comprised of two freestanding parts to form a symbiotic pair. The sculpture shares visual characteristics with paintings such as Topología Erótica (de la serie Azul azul) [Erotic Topology (of the Blue Blue series)] (2016), demonstrating how the artist repeatedly explores a set of core motifs across her lifetime.

Sign up to be among the first to know when new exhibitions by Zilia Sánchez or at Galerie Lelong & Co. New York open.