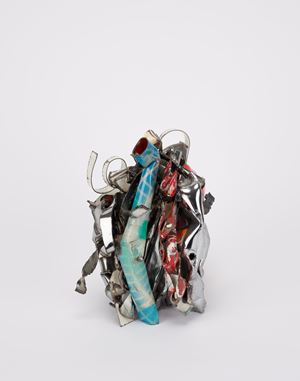 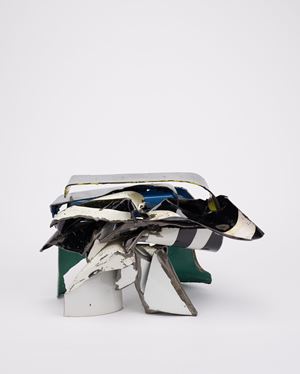 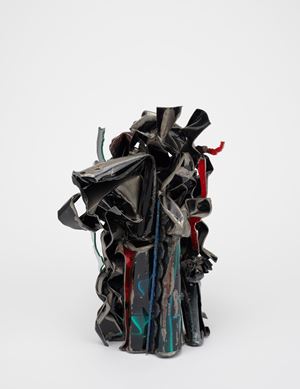 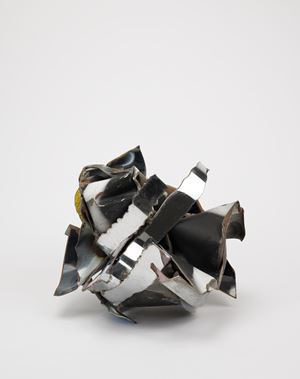 New York...Beginning 5 September, Hauser & Wirth will host an exhibition of work by John Chamberlain, featuring a selection of small-scale sculptures from the artist's 'Baby Tycoons' series. 'Baby Tycoons' is one of several series of miniature works that punctuates the grandeur and formalism of Chamberlain's larger sculptural pursuits. Alongside earlier small-scale series, the 'Baby Tycoons' articulate the instinctually playful spirit with which Chamberlain approached material and process at every scale. Masterfully manipulated from automobile scrap-metals, the 'Baby Tycoons' possess all the complexity and power of their larger counterparts. As Chamberlain himself remarked, 'If the scale is dealt with then the size has nothing to do with it.'

The 'Baby Tycoons' have not been the subject of a dedicated exhibition in over fifteen years. In 1988, Chamberlain fashioned what would become the first of these works from the bountiful scrap material that collected in his studio. This initial effort led to a remarkable series of sculptures defined by their jewel-like scale, abounding colour, and the fineness of the metal elements from which they are comprised. BEAUNEHEAD (1995), HER SUITE HAPPINESS (2004), and EROTIC ESKIMO (2006) communicate a distinct playfulness and elegance in their artistic equilibrium-a perfect 'fit' as the artist called it. Chamberlain continued to make these energetic miniatures throughout his lifetime.

John Chamberlain (1927–2011) was a quintessentially American artist, channeling the innovative power of the postwar years into a relentlessly inventive practice spanning six decades. He first achieved renown for sculptures made in the late 1950s through 1960s from automobile parts–these were path-breaking works that effectively transformed the gestural energy of Abstract Expressionist painting into three dimensions. Ranging in scale from miniature to monumental, Chamberlain's compositions of twisted, crushed, and forged metal also bridged the divide between Process Art and Minimalism, drawing tenets of both into a new kinship. These singular works established him as one of the first American artists to determine colour as a natural component of abstract sculpture. From the late 1960s until the end of his life, Chamberlain harnessed the expressive potential of an astonishing array of materials, which varied from Plexiglas, resin, and paint, to foam, aluminium foil, and paper bags.

After spending three years in the United States Navy during World War II, Chamberlain enrolled in the Art Institute of Chicago and Black Mountain College, where he developed the critical underpinnings of his work. Chamberlain lived and worked in many parts of the United States, moving between New York City, Long Island, Los Angeles, Santa Fe, Connecticut, and Sarasota, before finally settling on Shelter Island. In many ways, each location provoked a distinct material sensibility, often defined by the availability of that material or the limitations of physical space. In New York City, Chamberlain pulled scrap metal and twelve-inch acoustic tiles from the ceiling of his studio apartment. He chose urethane in Los Angeles in 1965 (a material he had been considering for many years), and film in Mexico in 1968. He eventually returned to metal in 1972, and, in Sarasota, he expanded the scale of his works to make his iconic 'Gondolas' (1981–1982). The movement of the artist and the subsequent evolution of the work is indicative not only of a kind of American restlessness but also of Chamberlain's own personal evolution: he sometimes described his use of automobile materials as sculptural self-portraits, infused with balance and rhythm characteristic of the artist himself.

Chamberlain refused to separate colour from his practice, saying, 'I never thought of sculpture without colour. Do you see anything around that has no colour? Do you live in a world with no colour?'. He both honoured and assigned value to colour in his practice–in his early sculptures colour was not added, but composed from the preexisting palette of his chosen automobile parts. Chamberlain later began adding colour to metal in 1974, dripping and spraying and sometimes sandblasting–paint and lacquer onto his metal components prior to their integration.

With his polyurethane foam works, colour was a variable of light: ultraviolet rays or sunlight turned the material from white to amber. It was this profound visual effect that brought the artist's personal Abstract Expressionist hand into industrial three-dimensional sculpture. Chamberlain moved seamlessly through scale and volume, creating material explorations in monumental, heavy-gauge painted aluminium foil in the 1970s, and later in the 1980s and 1990s, miniatures in colourful aluminium foil and chromium painted steel.

Central to Chamberlain's works is the notion that sculpture denotes a great deal of weight and physicality, disrupting whatever space it occupies. In the 'Barges' series (1971–1983) he made immense foam couches, inviting spectators to lounge upon the cushioned landscape. At the end of his career, Chamberlain shifted his practice outdoors, and through a series of determined experiments, finally created brilliant, candy-coloured sculptures in twisted aluminium foil. In 2012, four of these sculptures were shown outside the Seagram Building in New York, accompanied by playful titles such as PINEAPPLESURPRISE (2010) and MERMAIDSMISCHIEF (2009). These final works exemplify Chamberlain's lifelong dedication to change–of his materials, of his practice, and, consequently, of American Art.

Chamberlain has been the subject of numerous solo exhibitions, including two major retrospectives at the Solomon R. Guggenheim Museum in New York NY in 2012 and 1971; John Chamberlain, Squeezed and Tied. Foam and Paper Sculptures 1969-70, Dan Flavin Art Institute, Dia Center for the Arts, Bridgehampton NY (2007); John Chamberlain. Foam Sculptures 1966-1981, Photographs 1989-2004, Chinati Foundation, Marfa TX (2005); John Chamberlain. Current Work and Fond Memories, Sculptures and Photographs 1967-1995, Stedelijk Museum, Amsterdam, Netherlands (Traveling Exhibition) (1996); and John Chamberlain. Sculpture, 1954-1985, Museum of Contemporary Art, Los Angeles CA (1986). Chamberlain's sculptures are part of permanent exhibitions at the Chinati Foundation in Marfa TX and at Dia:Beacon in upstate New York. In 1964, Chamberlain represented the United States in the American Pavilion at the 32nd International Exhibition of the Venice Biennale. He received many awards during his life, including a Doctor of Fine Arts, honoris causa, from the College for Creative Studies, Detroit (2010); the Distinction in Sculpture Honor from the Sculpture Center, New York (1999); the Gold Medal from The National Arts Club Award, New York (1997); the Lifetime Achievement Award in Contemporary Sculpture by the International Sculpture Center, Washington D.C. (1993); and the Skowhegan Medal for Sculpture, New York NY (1993). 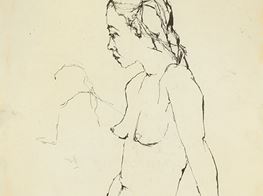 They sounded like an odd pairing when the announcement arrived: Eva Hesse and John Chamberlain, featured in the exhibitions, Forms Larger and Bolder: EVA HESSE DRAWINGS and John Chamberlain Baby Tycoons, at Hauser & Wirth's uptown townhouse. While they are clearly separate shows, their proximity nonetheless sets up inevitable — if...

Sign up to be among the first to know when new exhibitions by John Chamberlain Estate or at Hauser & Wirth open.