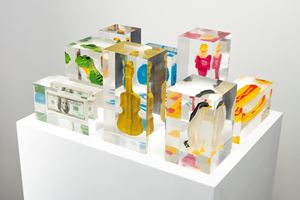 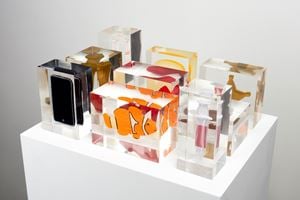 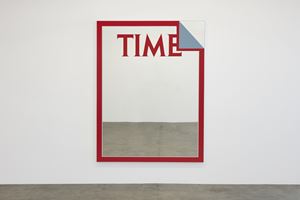 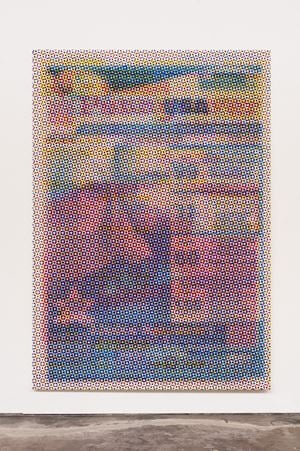 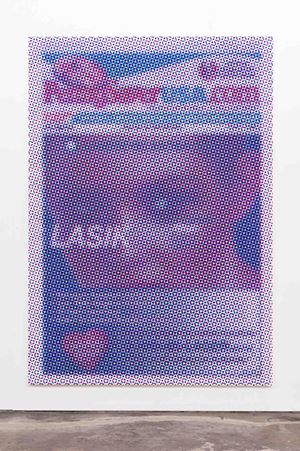 Following on from last year, MAKI Gallery is pleased to present a solo exhibition by Los Angeles-based artist, Mungo Thomson.

In 2019, the artist held his first solo exhibition in Japan, Rods and Cones. The focus of this very well received exhibition was his series of works of the same title. The series takes junk mail advertisements as its motif, particularly those that focus on sight and vision improvement, enlarging them to about 1,000 times their original size. The works in the series reveal how such advertising images are printed: they are in fact composed of overlapping dots of CMYK (cyan, magenta, yellow, black) that are assembled into a coherent image by the rods and cones (photoreceptor cells) in our retina. The viewer may feel a sense of frustration that the coherent image does or doesn't form, depending on the point or distance from which they view the work. This reversal of perceptions is precisely the concept that lies at the foundation of Thomsonʼs creative practice.

This yearʼs exhibition invites us to consider the concept of time. A key to understanding this concept lies in the TIME mirror, which also garnered a great deal of attention last year. It is common sense that we cannot see or touch time. However, as the artist explains, 'time happens in the mirror, looking into it every day, seeing time happen in your face'. The changes in ourselves that time brings to us (the 'aging', if it is permissible to use a direct expression)—the work cruelly tells us that this is the very thing which makes time visible.

There is another 'trick' to the TIME mirror. Appearing on the cover of TIME magazine not only cements oneʼs social status, but also provides an opportunity to publicly proclaim oneʼs sense of self-worth to the world at large. There are likely many people who work extremely hard, investing large amounts of time and money to achieve this. However, this artwork, which replicates the frame layout of TIME magazine on a mirrored surface, easily bypasses the time spent by such people and makes it possible for us to satisfy our vanity immediately. However, people age and will one day leave this world, together with their vanity. The TIME mirror thus brings to light those themes centered on time that art has engaged with for centuries.

Turning to the Stress Archive series, which will be shown in Japan for the first time as part of this exhibition, the motif is stress toys—common office items meant to relieve stress by being squeezed. Acrylic resin is poured around these cheap toys, so representative of todayʼs stress-filled society, so that they are crushed and preserved in that state. They are put under pressure as if they had been buried for a long time and then arranged in rows like an encyclopedia. The artist thus ''archives'' these stress toys as a tabletop city, an archaeological assembly of cultural material under pressure. Through the passage of times, mundane toys are bestowed with value, as if they are representative of their age... This series casts a glance at the fleeting present from the vantage-point of the future, again presenting us with an opportunity to reassess our concept of time.

The TIME mirror series quietly observes time as it passes. The Stress Archive series makes time accelerate, looking at the present from the future. This exhibition offers an opportunity to view in one place, works in which time flows in opposing directions, and through this, to engage with the intention behind each series on a deeper level and understand the artist, Mungo Thomson, from many different angles. We hope you will take this opportunity to view the exhibition.

Mungo Thomson is a Los Angeles-based artist, born in California in 1969. He is known for a diverse body of work that challenges institutions and perceptions, and for an engagement with printed matter and the archive through film, sound and object-making. In 2018, he held solo museum exhibitions at the Henry Art Gallery, Seattle, and the Museum of Fine Arts, Houston, and participated in group exhibitions at the Museum of Contemporary Art, Los Angeles; Museo Jumex, Mexico City; and the Hammer Museum, Los Angeles. Thomson has participated in the 2nd CAFAM Biennale, Beijing; the Pacific Standard Time Public Art and Performance Festival, Los Angeles; the 12th Istanbul Biennial; the 2008 Whitney Biennial; PERFORMA05, New York; and the Biennial of the Moving Image, MAMCO, Geneva, Switzerland. In 2013, he was included in the Yebisu International Festival for Art & Alternative Visions at the Tokyo Metropolitan Museum of Photography

Sign up to be among the first to know when new exhibitions by Mungo Thomson or at MAKI open.