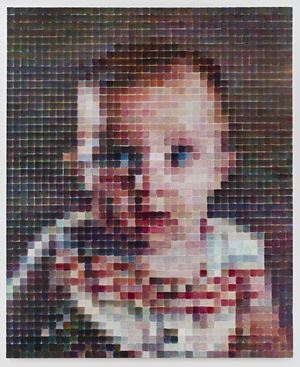 Presented in Collaboration with White Cube

Pace is honoured to present the first exhibition in the city dedicated to renowned artist Chuck Close, a representative figure of American realism, in collaboration with White Cube. The artist, who suffers from prosopagnosia (also known as 'face blindness'), is known for using photographic technology to repeatedly paint portraits of faces. He employs novel techniques to assemble and filter the reality captured by the camera and has made frequent breakthroughs in the tradition of portraiture to develop a surprising and unique way of seeing the world. The exhibition will be on view at Pace's gallery in the H Queen's building 10 January–14 March 2020, with an opening reception on Thursday, January 9, from 6-8pm, connected with the exhibition commencing on January 16 at White Cube, Hong Kong.

Having employed a variety of media throughout his career, Close has created a body of work that positions portraiture–and the careful rendering of the human face–as his primary subject of interest. Close began to make explicit use of a grid system, or an irregular grid based on a physical relationship to his support, in the late 1970s. The resulting works read like pixelated mosaics wherein the viewer's perception blends distinct areas of juxtaposed colour–be it layered shapes of colours, fingerprints, or lines–into a unified image. His first retrospective Close Portraits, organised by the Walker Art Center in 1980, included over 60 works made between 1968–1980 and documented the development of his pioneering style during that time. The exhibition travelled to the St. Louis Art Museum, Missouri, Museum of Contemporary Art, Chicago, and closed at the Whitney Museum of American Art in 1981. For more than six decades, Close has captured his friends and family in portraits that are as abstract as they are realistic, executed in a diverse range of media and techniques. The vehicles for Close's mark-making range from oil paint, airbrush, and finger printing to paper pulp and coloured pencil. He has also used myriad photographic processes, including the Daguerreotype, which, like the artist's jacquard tapestries that were exhibited at Pace's Hong Kong space in 2017, revived a centuries-old-tradition, propelling an antiquated technique into the modern era.

Highlights of the exhibition include a recent work Baby Jane (2018–2019), an oil on canvas painting that stretches over 10 feet tall and 8 feet wide, and Self-Portrait (Pink T-Shirt) (2013), a watercolour print featuring the iconic image of the artist's own face. Close's in-depth experimentation with the possibilities of digital technology started around 2012. He uses approximately 14,500 of his own hand made watercolour marks, each individually scanned into the computer, as the vocabulary for these works. Fully immersed in every aspect of the complex process, Close organises each image by determining how to break the composition down. He contemplates the number of squares over which the image will fall, and the order and exact location that each individual mark will be applied, never repeating a single stroke more than six times in each work. When complete, the artist prints them in watercolour on watercolour paper in layers of magenta, cyan, and yellow. Such technique can also be found in Lorna (2012) included in the exhibition as well.

The exhibition also features Close's Self-Portrait IV (Small) from 2015, where he shifts away from the expressionistic brushstrokes that have characterised his paintings since the 1990s. When viewed up close, the portrayed subjects disintegrate into grids of colour evocative of Paul Klee's 'Magic Square' paintings, allowing him to create distinct works from the same image through different saturations and juxtapositions of hue. These works attest to a heightened interest in the effects of colour and suggest a new way of challenging the processes through which his portraits are constructed.

Chuck Close's (b. 1940, Monroe, Washington) commitment to process and media characterises his approach to portraiture. He began creating portraits based on photographs in the late 1960s, using a grid to map each facial detail, which he would then recreate in exacting detail through painting. Beginning in the late 1970s, Close began to diverge from his highly detailed approach, instead constructing images that are still organised by a grid, but with layers of autonomous shapes and colours that cohere into his subject's face when viewed from a distance. Constantly revitalising his practice through varied media and modes of representation, his oeuvre encompasses painting, printmaking, drawing, collage, Daguerreotype and Polaroid photography, mosaic, and tapestries.

Close has been featured in over 500 group exhibitions and has been the subject of over 200 solo exhibitions in more than twenty countries. He received his first major museum exhibition Recent Work at the Los Angeles County Museum of Art, in 1971; and his first retrospective Close Portraits in 1980 was organised by the Walker Art Center, Minneapolis, which travelled to the St. Louis Art Museum, Missouri; Museum of Contemporary Art, Chicago; closing at the Whitney Museum of American Art. He has since been the subject of over twenty travelling exhibitions, including Chuck Close, The Museum of Modern Art, New York (1998); Prints: Process and Collaboration, Blaffer Art Gallery, University of Houston (2003–2016); Self Portraits 1967-2005, Walker Art Center, Minneapolis (2005); Paintings 1968-2006, Museo Nacional Centro de Arte Reina Sofia, Madrid (2007); Photographs, Parrish Art Museum, Southampton, New York (2016).

Sign up to be among the first to know when new exhibitions by Chuck Close or at Pace Gallery open.
Sign UpLogin