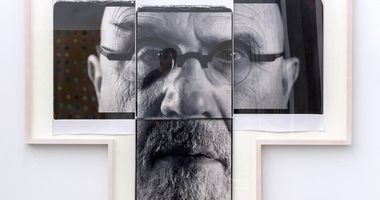 The late Chuck Close was a Photo-Realist artist who emerged in the late sixties with his very large precise portraits in sprayed acrylic black and white.

Close's early work can be seen as part of an art historical backlash against Abstract Expressionism's subjectivity, while his later more scientific explorations in colour mixing, parallels the rise of Process and Op Art, and Pop Art with its love of shallow depth.

Close went to the University of Washington, Seattle, in 1962 for a BA, but after getting a scholarship to Yale Summer School for Music and Art the previous year, he went there to complete an MFA in 1964. His classmates included Richard Serra, Brice Marden, Robert Mangold and Nancy Graves.

Initially an emerging Photo- (or Neo) Realist painter and printmaker who used grids as part of his process of enlarging images from gridded-up photographs of his sitters (working on the cellular units in sequence), Close became widely admired for a versatile range of image types and technical methods, including optical chromatic blending, inventively using fingerprints instead of an air-gun or brush, skilled (but unflattering) skin-tone modulation, and even expressive organic mark-making that referred to the gridded distorting structures of Victor Vasarely.

The scale of Close's flickering 'pixelated' (or photographic) portraits meant that although they were obviously figurative, they were also abstract in structure and difficult to recognise, due to perceptual fragmentation caused by enforced close proximity to their various depths of field, and the spatial limitations caused by the architecture. Close up to the paint provided a very different optical experience to that of standing a long way back.

Close also made huge reclining nudes in black and white, rich in their spectacular detail of mottled skin and sagging flesh, but not with the psychological intensity of the symmetrical portraits with their confrontational steely gazes.

In 1988 Close had a catastrophic spinal seizure that left him paralysed from the neck down, and for the rest of his life he was confined to a wheelchair. With a brush strapped to his arm he regained some movement, and with assistants, kept on working, his number of projects mostly undiminished.

Despite this formidable handicap, Close was known as a gregarious and sociable individual who in later years is said to have greatly enjoyed conversing with his sitters about art issues, its history, painting and drawing techniques and colourful personalities. The sitters mainly consisted of family, old university friends and other artists like Roy Lichtenstein or musicians like Philip Glass.

The assorted art historical dialogues were recorded in the studio and eventually published in a book: The portraits speak: Chuck Close in conversation with 27 of his subjects.

In December 2017, two women whom Close invited to pose for his nude paintings, complained publicly that he made lewd comments, and the next month four other women alleged he harassed them. The result was that some institutional surveys of work, such as one at the National Gallery of Art in Washington due that May, were cancelled.

I’ll quote Chuck when he told me that almost every significant breakthrough in his paintings has been as a direct result of something that he’s learned in making a print.

Related Press From Chuck Close to Sarah Sze, a Ride Through the Art of the Second Avenue Subway 5 January 2017, Hyperallergic

On New Year’s Day, there were two ways you could celebrate 2017 on either end of New York City’s Q train: take it all the way to Coney Island and go for a frigid swim with the Polar Bear Club or journ

When a city has been waiting for a badly needed new subway line since 1929, public art is probably far down the list of expectations, well behind accommodations like a) working trains, b) lights and c

A couple of weeks ago, I went to visit Chuck Close at his beach house on Long Island. The drive there always reminds me of an escape to the Hamptons in reverse. From the aristocratic brownstones of Park Slope, you work your way steadily down the socioeconomic ladder, past the towering Soviet-­style apartment complexes of Coney Island, through...

American artist Chuck Close’s singular artistic vision is not something that can be taught, or for that matter explained. In fact, walking through the Sydney Museum of Contemporary Art’s (MCA) “Chuck Close: Prints, Process and Collaboration,” there is a strong sense that Close sees the world differently to everyone else...

Sign up to be notified when new artworks and exhibitions by Chuck Close are added to Ocula.
Sign UpLogin