Texan artist Robert Yarber is renowned for his dizzying large-scale paintings of figures flying in the night sky above glittering megacities. His extraordinary hallucinatory style has been credited as the inspiration for Terry Gilliam's Fear and Loathing in Las Vegas, and has earned him global acclaim.

Combining the influence of ancient pre-Columbian cultures and Mexican art with modern-day schlock horror and comic-strip grotesque, Yarber's work, at once disturbing and comedic, trashy and mythical, embodies an eternal contemporaneity.

Yarber's palette is dominated by iridescent sherbet tones-a nod to the transcendental, as well as to more populist art forms. He has long been fascinated by the class associations of colour–colour has always been considered to be a lower dimension of sensability–an element he uses playfully to draw in multifarious influences from both high and low art in his work.

His multi-tiered, dreamlike landscapes evoke a sense of the sublime, recalling the mountainous arid regions of Utah, Arizona and Mexico, as well as a more Wagnerian fantasyland of chalets in the snow-peaked Alps. Some of the drawings have a more subterranean setting, a strange cavernous netherworld presided over by a top-hatted grim reaper–a dapper death figure who has become a sort of mascot in Yarber's art.

These are works that delight, shock and engage in equal measure and which require the viewer to immerse themselves entirely in Yarber's universe.

Yarber has exhibited internationally since the early 1980s, having achieved recognition through his inclusion in the 1984 Venice Biennale and the 1985 Whitney Biannial. In 1989 Yarber's work was included in the Horn of Plenty exhibition at the Stedelijk Museum in Amsterdam. He has had exhibitions at Sonnabend Gallery, New York; Virginia Museum of Fine Arts, Richmond; and Peggy Guggenheim Collection, Venice, amongst others. 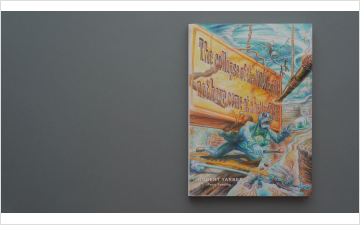