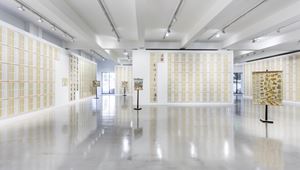 Erdkunde I, II, III (Geography I, II, III) consists of over 700 panels, each containing four vertical-format, annotated and collaged DIN A4 sheets. The artist constructs each collaged page with components characteristic of her work: wavy-line drawings resembling cursive script, handwritten encyclopaedia quotes from entries about the 'Earth' or 'Geography,' copies from scientific non-fiction books, illustrations from display boards and black-and-white photographs of her studio or exhibition views. Each individual page is rounded out with lists of place names, monuments, objects, historical people and events, offering a survey of the full thematic range of Darboven's work. The result is a kind of overall index of her encyclopaedic oeuvre.

Darboven expands the gargantuan wall hangings to include ten free-standing wooden classroom displays that add a third dimension to the work. The classroom displays visualise various elements of classic Geography and general study curricula. A map, views of a mountain landscape, and a schematic diagram of lignite and hard coal mining activity reflect the educational content of past decades while also offering insight into traditional, analogue means of educating and conveying knowledge.

The panels Darboven selects serve as a point of departure and material for creating new connections and constellations and testing her own systems of order. Her artistic strategy of associatively engaging with traditional knowledge content recalls Aby Warburg's method of combining reproduced pictorial materials of various kinds and origins for the panels in his legendary Mnemosyne Atlas (1924—1929). At the same time, Darboven reflects the traditional didactic methods and forms of presentation of knowledge transfer. The title Erkunde (Geography)—identical to the school subject of the same name—is a nod to the science that deals with the Earth, both in its physical nature and in relation to the effects of geographical conditions on social order and cultural development. The title also alludes to the origin of this science, the age of voyages of discovery, which marks the beginning of modern (natural) sciences. Erdkunde I, II, III (Geography I, II, III) is a tribute to natural scientist and universal scholar Alexander von Humboldt, who appears on two photographs of the first index in the form of a bust. Alexander von Humboldt, who would have celebrated his 250th birthday on September 14, 2019, is considered the founder of empirical geography. Darboven's work points to the entanglement of natural and cultural history that Humboldt explained in his famous 'Cosmos' lectures and in his research.

Darboven's Erdkunde I, II, III (Geography I, II, III) speaks to the basic, encyclopaedic endeavour to summarise the totality of all knowledge. At the same time her art shows not only a cognitive recording and mediation of historical and scientific facts, but also an increased striving for the sensual immediacy and authenticity of the physical world.

The first room in the gallery features Darboven's (Süd-) Koreanischer Kalender / (South) Korean Calendar (1991), a work based on pages from a South Korean yearly calendar. The particular graphic elements and colours in these 365 identically-framed plates and cover sheet have a rather bold, visually striking effect that is unusual for Darboven's work. Each sheet is dominated by large Arabic numerals, whereby the number is always framed by a header and footer section containing Asian and Arabic characters and numerals. The central numerals are printed in a lace-like pattern and surrounded by a series of little drawings representing luxury items such as diamond rings and wristwatches. Each of the 365 calendar pages contains handwritten entries in felt-tip pen showing Darboven's typical cross-sum calculations based on the day's date. These are calculated by totalling up the day, month, decade, and year, then translating that total into loopy, wavy lines that resemble cursive handwriting. The latter are arranged in to ten lines or fewer, with the sum of wave peaks recorded in the form of an Arabic number at the end of that line. At the bottom of each page are the handwritten words 'heute / today,' which Darboven has crossed out; the wavy lines are stricken through as well.

Lucy Lippard described Darboven's date-based records as 'a process which takes time to do, which takes time as one of its subjects, and which takes from time (the calendar) its numerical foundations.' The lengths of the wavy line in the drawings, which recede at the start of each month only to gradually increase again by month's end, recall the recurring movements of the tides, ebb and flow, and visualise genesis and elapse.

Hanne Darboven (1941-2009) is considered Germany's most important Conceptual artist. After studying at the Hochschule für bildende Künste in Hamburg, she moved to New York for two years before returning to her hometown in 1968. Darboven cultivated close friendships with American artist colleagues Sol LeWitt, Carl Andre, Lawrence Weiner, and other representatives of Minimalism and Conceptual Art, with whom she maintained a lively artistic exchange throughout her life. She lived and worked at her parental home in Hamburg's Harburg district until her death in 2009.

Hanne Darboven participated in documenta several times (1972, 1977, 1982, and 2002). Her work Kontrabasssolo. Opus 45 (1998-2000) for documenta 11 was shown on all three floors of the Fridericianum in Kassel. She represented the Federal Republic of Germany at the 1982 Venice Biennale (along with with Gotthard Graubner and Wolfgang Laib).

Recent solo presentations include a show of works at the Museo Nacional Centro de Arte Reina Sofía in Madrid (2014), a double retrospective at the Bundeskunsthalle in Bonn and the Haus der Kunst in Munich (2015/2016), as well as presentations at the Sammlung Falckenberg/Deichtorhallen Hamburg and the Hamburger Bahnhof-Museum für Gegenwart-Berlin (2017).

Sign up to be among the first to know when new exhibitions by Hanne Darboven or at Sprüth Magers open.