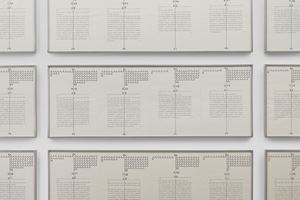 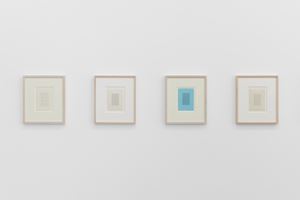 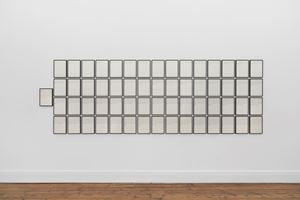 Following Hanne Darboven’s solo exhibition at the gallery’s Berlin premises, Monika Sprüth and Philomene Magers are pleased to present ZEICHEN DER ZEIT / ZEIT DER ZEICHEN / SIGN OF THE TIMES / TIMES OF THE SIGN, a juxtaposition of the artist’s work with that of Ruth Wolf-Rehfeldt at the London gallery.

While Ruth Wolf-Rehfeldt (*1932 Wurzen, lives in Berlin), pursued her artistic activities as an autodidact in East Berlin in the days of a divided Germany, Hanne Darboven (1941–2009) grew up in Hamburg’s Harburg district in the western part of the country. Darboven completed her art studies in 1966 and took up residence in New York, where she quickly joined the creative epicentre around Sol LeWitt, Carl Andre, Joseph Kosuth and other minimal and conceptual artists.

It must have seemed like self-chosen exile when Darboven returned to her parental home in 1969, where she would spend the rest of her life devoted to her work. However, the artist soon established herself as a very active part of the international art scene, thanks to numerous exhibitions and especially her close written correspondence with peers.

Ruth Wolf-Rehfeldt was by contrast involuntarily cut off from most the Western (art) world as a consequence of the political situation in Germany. In the 1970s, Wolf-Rehfeldt and her husband Robert Rehfeldt became East Germany’s most active coinitiators of the Mail Art movement; it was her sole channel for exchanging ideas with other artists around the world.

The two artists lived on opposite sides of the Wall in post-war divided Germany. Though active at the same time they neither knew each other personally, nor were they familiar with each other’s work. Nevertheless, there are some parallels to be found—similarities that appear not only in terms of output, but also with regard to their letters and exchanges with international artist networks.

This exhibition is the first to place the two artists in dialogue some thirty years after German reunification. Though centred on works from the 1970s and 80s—some of which are being shown for the first time—it also expands on them with the inclusion of material from Darboven’s extensive correspondence and Wolf-Rehfeldt’s Mail Art contributions.

Though the repetition of forms, symbols and signs—often consisting of letters or numbers—is a recurring element in the work of both artists, they serve different purposes in terms of content: Darboven’s works submit to a clear, artist-defined structure that allow her to visualise complex contingencies and relationships. It strikes a contrast to Wolf-Rehfeldt’s visual formula, which is set by possible combinations of the typewriter characters she employs in her works. Her typewriter works on paper, which she refers to as 'typewritings', can be understood as studies of visual and concrete poetry and linguistics. They were created using innovative combinations of symbols and visual shapes that reference conceptual art, graphic design and architecture. The shape often simultaneously conveys the content, as in Divided Planet, a typewriting consisting of the repeated word 'planet' arranged in a circle. The variable density of both the individual letters and the keystroke-dependant colour intensity of the black typewriter ribbon result in a clear subdivision of the (Earth’s) sphere, a reflection of the political situation at that time.

Unlike Wolf-Rehfeldt, for whom individual works on paper are usually self-contained pieces, Hanne Darboven began very early on to create multi-part installations that soon filled entire rooms. Her work Ein Jahrhundert. 1b (1971–74), on view on the ground floor of the gallery, consists of 100 A4 sheets of paper in 25 frames. Each sheet stands in chronologically ascending order for one year of a century, whereby the two numbers—presented here in an interplay of numerical words typed on a typewriter and U-arcs written in ink, a typical feature of her work—refer to cross-sum calculations of the first and last day of the year shown.

Wolf-Rehfeldt, who completely gave up her artistic practice after German reunification in the early 1990s, still lives in her house in former East Berlin, which also served as her studio. While Darboven made an international name for herself at an early age, Wolf-Rehfeldt worked steadily for three decades, far from any significant attention. There was little change to Wolf-Rehfeldt’s situation until 2012, when her work was (re) discovered and made accessible to the public for the first time in an institutional solo presentation (Ruth Wolf- Rehfeldt – Original Graphic Works 1972–1989, Weserburg Study Centre / Museum of Modern Art Bremen) on the occasion of her 80th birthday. Regular exhibitions were soon to follow; her work featured at Albertinum, Dresden (2018/2019); Malmö, Konsthall (2017–2018); documenta 14, Kassel (2017); Museum für konkrete Kunst, Ingolstadt (2017); Kunstsaele Berlin (2016–2017); and Kunstnernes Has, Oslo (2016–2017).

Hanne Darboven (1941–2009) is Germany’s most significant conceptual artist. She exhibited at a number of documentas (1972, 1977, 1982 and 2002). Her work Kontrabasssolo. Opus 45 (1998–2000) at documenta 11 was shown on all three floors of the Fridericianum in Kassel. In 1982 she represented the Federal Republic of Germany at the Venice Biennale (along with with Gotthard Graubner and Wolfgang Laib). Historically important solo exhibitions include those at Kunsthalle Bern (1969); Westfälischer Kunstverein, Münster (1971); Kunstmuseum Basel (1974); Deichtorhallen Hamburg (1991/92), Stedelijk Van Abbemuseum, Eindhoven and Musée d'Art moderne de la Ville de Paris (both 1986); Dia Center for the Arts, New York (1996); Staatsgalerie Stuttgart (1997); Hamburger Kunsthalle (1999 and 2006); and Deutsches Guggenheim, Berlin (2006). Recent solo presentations include a retrospective at the Museo Centro de Arte Reina Sofía in Madrid (2014); a double retrospective at the Bundeskunsthalle in Bonn and the Haus der Kunst in Munich (2015/2016); and presentations at the Falckenberg/Deichtorhallen Collection in Hamburg and Hamburger Bahnhof – Museum fur Gegenwart Berlin (2017).

Sign up to be among the first to know when new exhibitions by Hanne Darboven, Ruth Wolf-Rehfeldt or at Sprüth Magers open.